You’d think after nearly 40 years of opera going I’d have seen almost everything.. .twice. Yet I found myself at LA Opera Tuesday night for a special presentation of George Frideric Handel’s Alcina which was my first live experience with one of his operas. 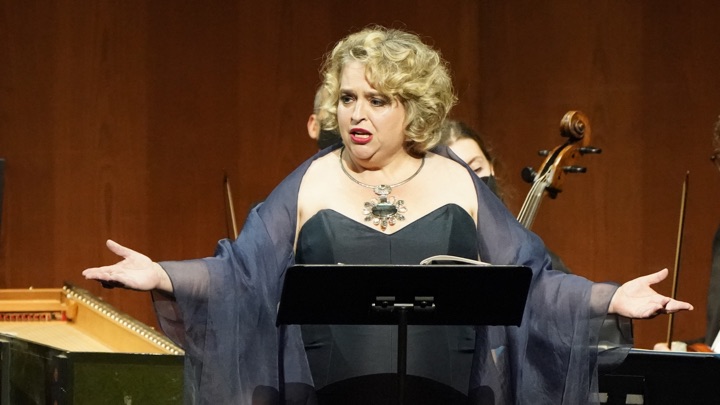 Mr. Handel and I aren’t great friends. Although I admire his Giulio Cesare (two recordings in my collection) of his Alcina I actually own three, one of which commemorated one of the inaugural offerings of the then named Los Angeles Music Center Opera Association in 1986. The production had originated the year prior by The Opera Stage as part of the City of London and Spitalfields Festivals and starred the great and glorious Arleen Auger who was a local L.A. girl done good. It’s a glorious recording all around and I’m glad we have this souvenir of Ms. Auger who we lost not seven years later.

So it was a homecoming of sorts for Herr Handel and taking his place at the harpsichord was Harry Bicket leading his baroque group the English Concert and a cast of hand-picked singers. Maestro Bicket and his orchestra have had an annual standing invitation at Carnegie Hall for events like these and we were supposed to get our first visit with Rodelinda last May. Based on the performance last night I can only hope we also become an annual stop.

The first good sign was that the bandshell had been fashioned into a full wall across the stage and well forward with the soloists at the apron, turning the normally recalcitrant acoustics of the Dorothy Chandler Pavilion into a near ideal performance space for baroque players and voices. Or at least as ideal as a hall that used to regularly host the Oscars.

I had real fears about a slavishly traditional performance with miles of recitative and continuo twiddling away in the background for (literally) hours on end. Yet Mr. Bicket proved himself to be a man of the theatre. We got a slightly pared down performance edition. First, no ballets (no room for dancers so no real loss there), I’m no musicologist in this era but my guess is that the recit’s were trimmed as well because the plot was so easy to follow with the supertites (reading the synopsis can literally make you dizzy). We did however lose the entire character of Oberto(!) with a little arioso in Act I and then again in Act III which is one of my favorites, Still there’s plenty left to enjoy and for the brief final chorus all the soloists participated.

The first act plays for comedy, the second for tragedy, and the third for something close to a bemused rescue, minus the witchy sisters Alcina and Morgana, of course, who end up where all bad girls go.

The thing about Handel is you can always tell who the great singers were in the cast because they got the best music. Sadly it would appear that the first cast Melisso was no great virtuoso and was only given one small aria of middling quality. Wojtek Gierlach, who has a fine bass voice, did what he could but you can’t make cashmere from cotton balls. 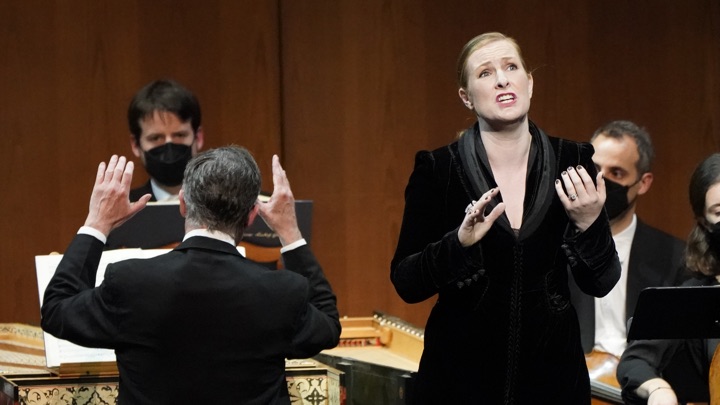 Alek Shrader as Oronte nearly brought the house down in Act I with his uproarious “Semplicetto a donna credi” which featured fioratura tossed in with animal noises. A lovely juxtaposition to his last act. “Un momento di contento” which was sung in a sweet voix mixte with delicious phrasing.

I’ve enjoyed Elizabeth DeShong here as a gallon-jug Rosina in the Barber and a quicksilver Sesto in Mozart’s Clemenza di Tito. Her participation here as Bradamante was a luxury and most welcome. She has a near faultless technique and filled nearly all her phrases with a full warm sound. That said I wish that she or Maestro Bicket had taken their foot just slightly off the gas for her Act II dazzler, “Vorrei vendicarmi”. Ms. DeShong can sing faster than anyone I’ve heard but at that speed the notes themselves didn’t sound in her voice on Tuesday night.

Paula Murrihy was the Ruggerio and she cut a very fine figure onstage in her velvet lady’s tuxedo jacket managing to straddle Handel’s gender vocal re-assignment easily. Her best moment was in Act II’s “Verdi prati” where the voice, and she herself most likely, was given extra room to breathe. Her ornaments were good and clean all evening but the character itself is slightly wan and hard to bring to life. I almost wanted more voice from her but her interpretive choices made sense in the context of the character and the performance.

As Morgana we were blessed with the deliciously vivacious Lucy Crowe. She had the audience eating out of her palm from the moment she took the stage. With voice that’s almost too big and lush for Handel’s music. Yet she met all its demands with uncommon precision and ease. She could teach lessons on how to sing a straight tone without blanching it of all quality. She turned, “Tornami a vagheggiar” into a frisky love song with the best, and most surprising, ornamentation I’ve ever heard. Pinpoint staccatos descending from on high. The audience looked forward to her every utterance and I don’t know where she’s been all my life?

The mistress of this enchanted Island is Alcina and for a woman of a certain age with formidable skills of persuasion, whether she needs to use make-up or magic, I don’t think you could find better than Karina Gauvin. The Québecoise soprano has an arsenal of baroque skills and I think we got to hear most of them Tuesday night. The tone is full and clean with a nice even scale and real quality on the top. She’s got a miraculous little micro-trill that took a moment to start working. I think she got to sing all seven of the arias Handel wrote her and she conquered all.

The Act II double-nervous breakdown, “Ah! Mio cor”, followed by, “Ombre pallide” was a tour de force not only vocally but dramatically as well. It wasn’t just a beautiful voice singing beautifully. She displayed impossibly long-breathed phrasing to astonish and pitches targeted out of thin air. Especially potent was a growling chest voice that stunned with its ferocity in one particular phrase. Ms. Gauvin certainly cast a spell over the audience more than once.

All evening Maestro Bicket’s level of accompaniment showed his true skill. Leading from the harpsichord with nary a backward glance (I kept looking for a rearview mirror) his connection to his singers was palpable and allowed them to play with the music. No overtly showy cadenzas necessary for his singers either, because it’s all in the music already on the page, and a superb sense of tempo with relation to each piece and keeping the momentum of the evening moving forward. Some of the playing even surprised in its level of brutality. Three of his players were deservedly singled out at the calls for their solo contributions during arias.

There’s one more performance here at the Music Center on Friday night and then the troupe heads up to Berkeley to be presented there by Cal Performances for one more at Zellerbach Hall on 7 November.