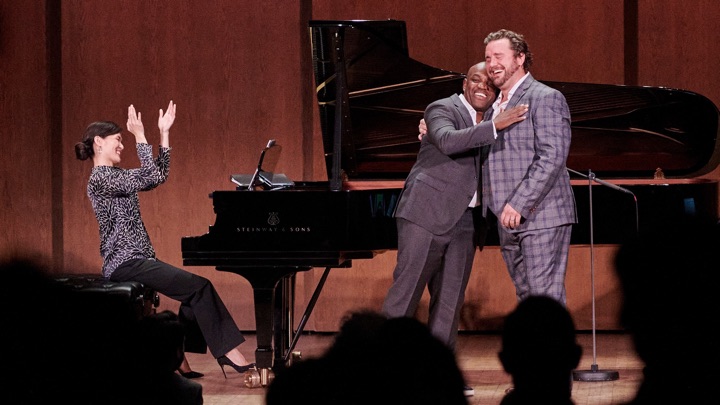 Probably no other New York City venue has ever played host to so many tenor high-Cs—and above!. The concert ended in several bouts of “Anything You Can Sing, I Can Sing Higher” that whipped the enthusiastic if less-than-capacity audience into cascades of rowdy applause unlike any I’d heard in a very long time.

While Brownlee and Spyres had performed highlights from their “Amici e Rivali” CD with orchestra and chorus at Philadelphia’s outdoor Mann Center in August, NYC got a slightly different indoor program in the very live acoustic of the Y’s beautiful wood-paneled auditorium.

It began unpromisingly with a gag-filled six-hand transcription of the overture to Il Barbiere di Siviglia during which Huang was joined by Thomas Lausmann and Bryan Wagorn. Spyres’s sparkling “Largo al factotum,” however, gave a pleasing sample of his recent flirtation with baritone repertoire (about more later), but an occasionally raw “Cessa di più resistere” failed to show Brownlee at his best. However, the bantering duet for Almaviva and Figaro once again demonstrated the delicious chemistry between the two that has made their recent collaborations so special. 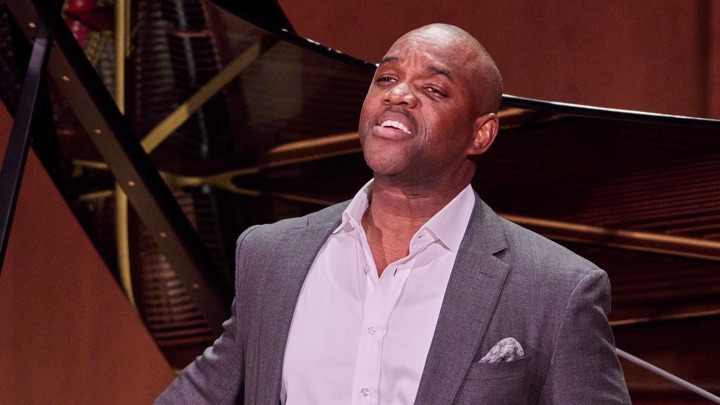 Some complained that the concert presented just four duets from “Amici” but those were the only works performed by the pair on the CD that don’t require either a mezzo or another tenor. As one rarely encounters serious Rossini operas on these shores, I was especially grateful to hear the Leicester-Norfolk duo from Elisabetta, Regina d’Inghilterra and especially the magnificent extended Ricciardo-Agorante duet from Ricciardo e Zoraide. In both they exhibited exemplary legato and spectacular coloratura with Brownlee’s lighter, higher voice perfectly complementing Spyres’s darker “baritenor.”

Brownlee’s absence from the Met has now stretched on for six years and Spyres has sung just two performances there, so the Y gets high marks for inviting these treasurable artists, but the printed program and texts left something to be desired. They promised the song “La Promessa” as part of the Barbiere suite but it wasn’t performed, and the text for Spyres’s Otello solo contained only the briefest lines of that three-part aria.

Following Almaviva-Figaro, Spyres performed an exquisite “L’esule” which displayed the sheer beauty of his burnished tenor, then Brownlee followed with a swirling, tongue-twisting song whose title remains a mystery. A pirate of the two songs luckily came into my possession: can anyone identify the second?

The program’s final items were drawn from the rarely performed Otello and showed both artists at their best. Brownlee’s urgent rendition of Rodrigo’s “Che ascolto” and Spyres’s regal “Ah! Si, per voi gia sento” erased any doubts that we were hearing two of today’s finest exemplars of the scene-changing American Rossini renaissance launched by Marilyn Horne and continued via Samuel Ramey, Lella Cuberli, Rockwell Blake and Chris Merritt, among others.

The duet “Ah vieni, nel tuo sangue” in which Rodrigo challenges Otello to a duel found Brownlee similarly daring Spyres to ever more stratospheric high notes. A screaming, stomping ovation encouraged the beaming pair—and who didn’t see it coming?—to detour from Rossini to Donizetti for a special two-tenor “Pour mon âme” from La Fille du Régiment! Their final encore was a repeat of the Otello sparing featuring even more spectacular feats of high-flying tenorial derring-do!

Those who missed the concert or the Y’s livestream might travel to Bratislava in early December for a repeat. And in 2022 Brownlee will stray from Spyres for a similar duo recital in Toulouse with young South African tenor Levy Sekgapane whose own all-Rossini CD “Giovin Fiamma” was released two years ago.

The “Amici e Rivali” recording remains essential and Brownlee’s marvelous Rossini disc from 2014 contains his Otello aria, but Spyres’s can be found (this time with full orchestra and chorus) on his newest solo disc  “Baritenor” released last month.

Words can scarcely do justice to the wild ambition and edifying achievement of this stupefying collection of eighteen tenor and baritone arias ranging in chronological order from Mozart to Korngold, via Spontini, Offenbach, and Ravel and Orff: a solo CD which refreshingly eschews a predictable “concept”!

When I first saw the disc’s contents, I was skeptical; wouldn’t his “Largo al factotum” or Pagliacci prologue sound much like a certain octogenarian tenor’s unconvincing excursions into baritone repertoire? I was astonished that they didn’t. Spyres might not bring Robert Merrill or Cornell MacNeil to mind, but his achingly moving “Il balen” from Il Trovatore made me wish I could hear him as di Luna!

As impressive as the baritone arias are (my absolute favorite is his gloriously arrogant reading of Mozart’s alternate higher version of the Nozze Count’s “Hai gia vinto la causa?”), the tenor arias prove just jaw-droppingly good. Taken together, the awe-inspiring musical and linguistic command must be nearly unparalleled. For instance, “Fuor del mar”’s grandlly fluent coloratura is then trumped by a superbly rapt Lohengrin narration (in French!) and then again by the debonair Danilo’s fizzy paean to Maxim’s from Die Lustige Witwe! An instant classic, the CD is compulsively listenable; I must be on my seventh or eighth go-round by now.

And just last Friday, Erato released Spyres in the title role of Mozart’s Mitridate, Re di Ponto, a seria written when the composer was just 14! 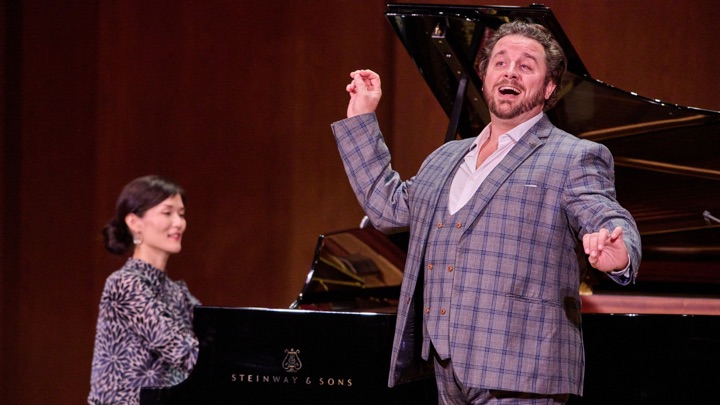 We have COVID to “thank” for this fine new recording by Marc Minkowski leading his Musiciens du Louvre. The conductor was in the midst of rehearsing a new Mitridate staging for the 2020 Barocktage at Berlin’s Staatsoper when it was inevitably canceled. Warner jumped in and brought Minkowski and his two leading ladies, Julie Fuchs and Elsa Dreisig, into the studio adding to the mix Erato exclusives Spyres and Sabine Devieilhe along with up-and-coming French countertenor Paul-Antoine Bénos-Djian as Farnace.

Mitridate has had a lucky history on records from the pioneering Leopold Hager version to Adam Fischer’s and two, Christophe Rousset’s and Ian Page’s, that, like Minkowski’s, feature period instruments. Occasionally I wish Fuchs’s Aspasia were a bit bolder and sometimes her highest notes tarnish but hers is altogether an impressive achievement in a most complex and challenging role. Dreisig as Sifare doesn’t try to be convincing as a man but sings with infectious élan especially in the ravishing “Lungi da te.” Ismene is not a showcase role but Devieilhe’s winning charm makes its effect. Her upcoming Bach, Handel and Rameau recordings will no doubt provide more nourishing pleasures.

Countertenors have rarely convinced me as Farnace; Brian Asawa’s pallid interpretation is a major blot on the Rousset set. I much prefer a gutsy mezzo like Agnes Baltsa on the Hager or Fischer’s Kristina Hämmarström. However, Bénos-Djian, a new name to me, does very well making me eager to hear him as Didymus in another upcoming Erato project: Handel’s Theodora co-starring Spyres, Joyce Di Donato and Lisette Oropesa.

Needless to say, Spyres, a veteran of Mitridate productions in London, Paris and Brussels, is in full command of the king’s killingly wide tessitura. His short, fiery arias steal every scene.

The role of Mitridate however cedes tenor coloratura flourishes to Marzio whose single florid aria is dispatched with easy aplomb by Cyrille Dubois. Minkowski’s powerfully exciting reading may already be familiar from an earlier Salzburg Festival DVD but this studio recording is finer still.

These two Warner/Erato releases will have to suffice for Spyres fans for the moment. But I understand that last year the “baritenor” recorded a new CD recital of 17th and 18th century arias accompanied by the period-instrument ensemble Il Pomo d’Oro. It’s due to appear in 2022 and I can’t wait!