Lawrence Brownlee and Michael Spyres are two singers at the top of their game, as this concert showed, virtually peerless in music as punishing as it is pretty. 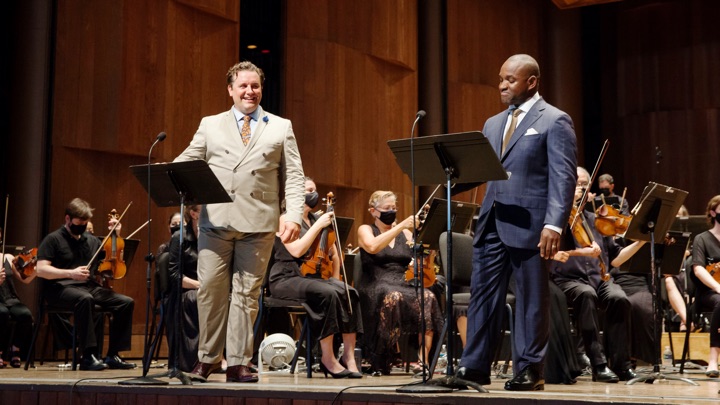 CAMERON KELSALL: Step aside, Mary and Ethel… there’s a new mutual admiration society in town. I mean that literally. Although Lawrence Brownlee and Michael Spyres titled their joint concert Amici e rivali—or “friends and rivals,” also the name of their 2020 album of Rossini arias and scenes—there was little evidence of cutthroat, adversarial tenor behavior on display at the Mann Center. If anything, the pair seemed absolutely jovial: they patted backs, high-fived and if there was any sense of competition, it was delivered in a mocking, collegial way. As it should be. These are two singers at the top of their game, as this concert showed, virtually peerless in music as punishing as it is pretty. At 48 and 41, respectively, neither shows much evidence of road weariness, although their voices are clearly still evolving, and both are eminently comfortable feeding off the energy of a receptive audience. That was the other mutual admiration society: After months of screens and stereos, the large audience fielded by Opera Philadelphia for this one-off performance seemed especially appreciative and receptive, a hopeful sign for the season to come even as Delta variant fears remain ever-present. David, I think you know I’m not the greatest fan of bel canto, but even I have to admit that much of this program thrilled me.

DAVID FOX: Well, I am a bel canto lover, as you know, Cameron. In fact, hearing a 78 recording my parents still owned of Amelita Galli-Curci singing “Una voce poco fa” imprinted itself on me when I was five or six years old. It was likely my first exposure to opera, and I was instantly hooked. Even more than that early revelation, this concert brought back another formative moment for me—as a teenager, buying an LP of Joan Sutherland and Marilyn Horne in duets from Semiramide. Brownlee and Spyres at their best delivered a similar level of mind-blowing virtuosity—who could even imagine that voices can do that?? And the material here was nonpareil for showcasing their gifts, though it did feel less like a dinner than a buffet of exquisite desserts. Semiramide is, of course, Rossini—as was most of the program here (though there were delightful side trips to Bellini, Thomas and Adam). I can’t hear his music now without smiling as I remember a dear friend’s droll remark that Rossini always makes him think of Jane Austen’s bon mot: “You have delighted us long enough.” But for me, that delight is considerable—and when delivered with this level of skill and charisma, I’m happy to have it go on for a long, long time.

CK: A long, long time would have been too long for me for one specific reason—the general discomfort that comes with al fresco concerts. Now more than ever, 18 months into the pandemic, we still see companies choosing to bring their events outdoors, and it makes special sense when Opera Philadelphia has a spot as bucolic as the Mann at its disposal. But we still had to contend with a heat index above 100 well into the evening, beads of sweat forming behind our compulsory masks and the distant chirping of some insects underscoring the orchestra (Locusts? Cicadas? Some jealous tenor crooning in the distance?) To their credit, Brownlee and Spyres braved the elements with no signs of fatigue or sunstroke, even in heavy suits, and maestro Corrado Rovaris was his usual cucumber-cool self on the podium. But anyway, let’s get to the music, shall we? 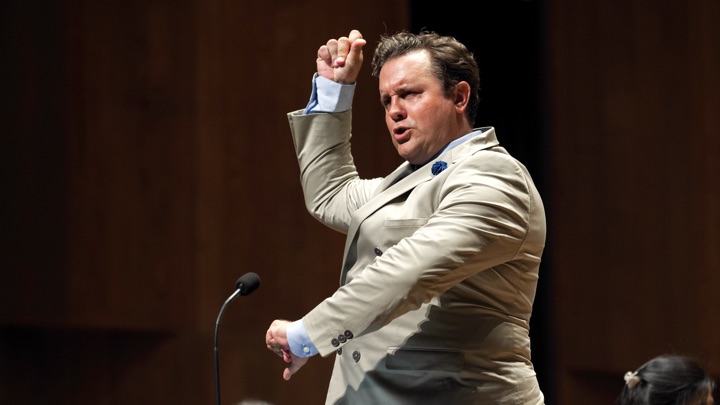 DF: Yes, let’s. And since you’ve just mentioned Corrado Rovaris, before we get to Brownlee and Spyres, I’d like to praise him as (literally) the unsung hero of the event. Bel canto takes a very particular spring and sense of forward momentum but also ever-shifting dynamics and rubato, and I truly can’t think of another conductor today who is his equal in this genre. It takes a lot for me to focus anew on the Barbiere di Siviglia overture, but that’s exactly what happened last night. Bravo Maestro!

CK: Indeed, he was superb in both the overtures that showed the fine mettle of the Opera Philadelphia orchestra—three in total, including Thomas’ Raymond ou le secret de la reine alongside the more familiar beginnings from Barbiere and Tancredi. That many might have seemed like overkill under different circumstances. (Rovaris paced the recording but with a different ensemble.) The larger number of orchestral pieces was probably needed to give Brownlee and Spyres extended moments to recover from their vocal pyrotechnics, which began almost immediately with “Ah si, per voi giá sento” from Otello, which showed Spyres’ remarkable agility in leaping from the very bottom of his range to the tip-top.

DF: Certainly, the astonishing range of Spyres’ voice was a particular winning hand last night, as he sang —effortlessly—music for tenor and baritone. The natural timbre of his voice has a darker coloration than the more honeyed tone of Brownlee’s, which makes for a delightful complement. Spyres’ agility is even more astonishing given that darkness. This will be a strange comparison, but last night there were moments when hearing him made me think of another favorite singer of mine: Cleo Laine. Like her, he employs a huge arsenal of coloristic devices. But also like her, the top notes—stratospheric and true—sound a bit spliced on. I have a hunch he may soon be moving into a somewhat different repertoire. 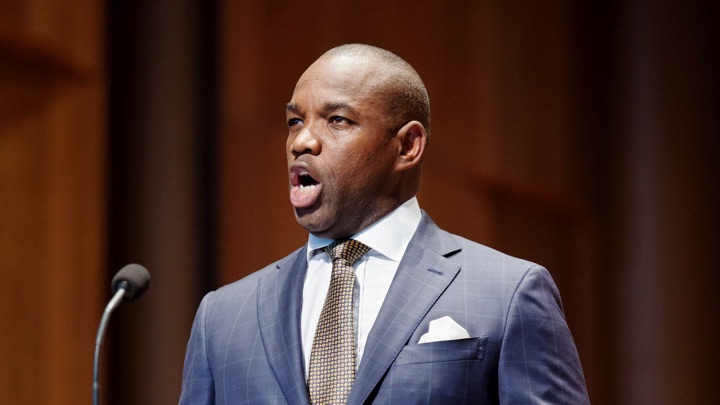 CK: Into the Woods? The Mystery of Edwin Drood? Probably not on that Cleo Laine trajectory, alas. I don’t entirely agree with you that the top notes sound appliquéd, although they are a bit more hard-won than even a year or two ago. That said, if Spyres found himself announcing engagements in the baritone fach, I’ll line up to buy a ticket. Unlike some other recent Zwischenfachs, who shall remain nameless, this is not tenorial fakery. Brownlee and Spyres skipped the Almaviva-Figaro duet that appears on the CD, but Spyres gave us a credible “Largo al factotum,” although the patter was sometimes a touch muddled. The baritone selection that really excited me was Hamlet’s Brindisi, delivered as an arresting narrative and with a solid, stylish lyric tone.

DF: I’d also point out that the “Largo al factotum”—very playful, but always making his comic points musically—and the Hamlet aria showcased Spyres’ acting chops very impressively. As for moving into baritone repertoire, I’d love to hear more. That is certainly not a transition I expect from Brownlee, who’s liquid, lyrical, highly-placed tenor is one of the loveliest instruments to be heard in opera today. I feel fortunate that I got in on the ground floor with him. I was present at the Met in April 2001 when Brownlee won the Met National Council finals, and I remember how “Ah mes amis… Pour mon ame” from Fille du Regiment drove the crowd wild. It now feels like an historic moment. But to me, the most astonishing thing is that he has been singing that signature aria—and others with similarly stratospheric high notes —for 20-plus years now, with absolutely no sign of diminishing ease. Indeed, while the voice has taken on additional warmth and amplitude, demonstrated here with “Asil hereditaire” from Guillaume Tell, the freshness and ping are unchanged. That’s pretty mind-blowing in itself. Brownlee is a technical marvel as well as a true artist, but I do have one reservation—musically sensitive as he clearly is, there’s very little in his singing below mezzo forte. Particularly in the French repertoire that he now embraces, skill at spinning soft high notes would be a major plus. I missed it here in “Asil,” which was otherwise a vocal knockout – and also in the famous showpiece aria from Postillon de Lonjumeau.

CK: It’s surely telling that as we were driving home last night, our conversation consisted largely of discussing roles that Brownlee hasn’t yet sung but should, and that the seemingly endless list included everything from Arnold in Guillaume Tell to Idomeneo! Yes, the voice is incredibly fresh, fluid and aging like grand-cru Burgundy. If this were really a competition, you’d have to declare him the winner, even if the French is accented and the dynamics are not quite what you want them to be. The sheer preservation is extraordinary. (Worth noting too he still looks youthful and bright-faced, and should be able to continue playing younger romantic leads that might appear slightly ridiculous for another man his age.)

DF: Of course, the differences as much as the shared skill sets are what made it fascinating to hear these two tenors in three duets by Rossini, each of which brought an almost Olympic sense of competitive bravado. This was especially evident—and played to the hilt—in the final number on the official program: “Ah! Vieni, nel tuo sangue” from Rossini’s Otello. As seen and heard here, it was an astonishing display of virtually everything these two singers can do—the operatic equivalent of “Anything You Can Do” from Annie Get Your Gun. As an adaptation of one of Shakespeare’s grandest and most emotionaly wrenching tragedies, it fails utterly. But as a vehicle for virtuoso vocalism, it’s dazzling.

CK: Indeed. Verdi, you look better than ever! But really, although we know both artists are capable of restraint and introspection, that’s not what this concert was about. (Hell, the event’s subtitle — “An Evening of Vocal Fireworks” — says it all.) This was a celebration and a return for Opera Philadelphia, and that’s what it felt like. In addition to Brownlee, a longtime artistic adviser to this company, it was moving to see and hear the men of Opera Philadelphia’s chorus on risers behind the orchestra, in very fine form, affirming the act of communal music-making. Despite the rather heated subjects at hand in these grand operas, the ultimate result was a lovefest, and deservedly so.