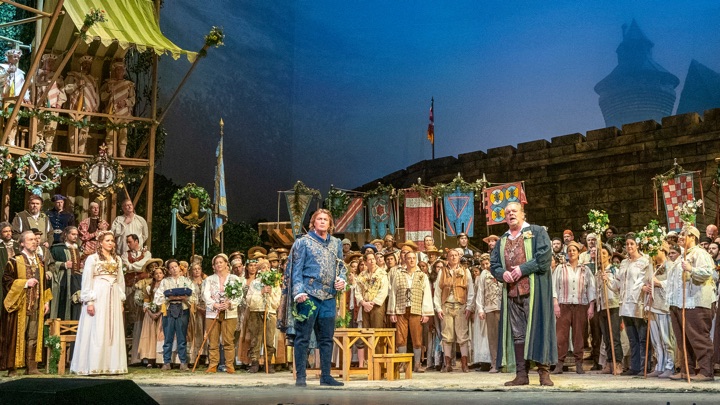 Uneasiness about transatlantic travel and reports of visa refusals initially dampened hopes as US opera companies began reopening this fall. A starry revival of Die Meistersinger von Nürnberg proved the main focus of concern for Met fans as just one of its nine announced principals lived in America.

However, all were in their places Tuesday evening as Sir Antonio Pappano returned to the house for the first time in 24 years to lead a joyous performance that did much to erase bad memories of the company’s last Wagner before the COVID shutdown: a dreary DOA new Der Fliegende Holländer.

Meistersinger has always been the Wagner opera that I’d much rather attend than just listen to. Its lengthy, involved dialogues can be challenging at home but with vivid performers on stage it’s nearly always a delight. And last night’s cast, dominated by the irascible, unbeatable duo of Michael Volle and Johannes Martin Kränzle as Sachs and Beckmesser, did much to enliven Otto Schenk’s creaky, nearly 30-year-old production.

They, along with Paul Appleby as David and Martin Gantner as Kothner, had starred in the previous revival when I saw it in 2014, and if their still-potent voices showed a few signs of the passing years, both baritones were still at the top of their game.

Those used to a warm and fuzzy Sachs may be frustrated by Volle’s unpredictable volatility. During the first act, the baritone emphasized the cobbler’s exasperation with his fellow master-singers which made his eventual acceptance of a fellow-outlier like Walther so believable. Rather than a good-hearted teasing, his mocking by-play with Beckmesser simmered with sadistic glee. 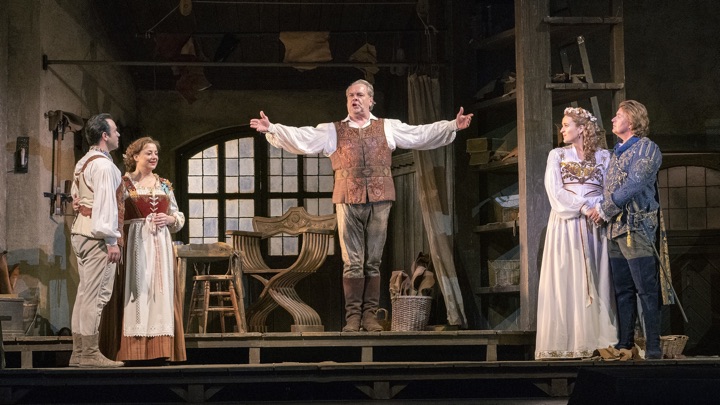 If the Sachs-Eva relationship was one-sided, the frustrated lover was Pogner’s daughter not Sachs who appeared flummoxed by her impulsive embrace and ecstatic “O Sachs, mein Freund.” An astonished Volle was genuinely moved and surprised by the village-wide unexpected acclamation during the St. John’s Day Festival.

Though he understandably tired a bit during the rigors of the nearly two-hour third act, Volle, now over 60, sang with blooming strength and vigor and acted with peerless detail, as did Kränzle who is his near-contemporary. The latter’s riotously dyspeptic Beckmesser only occasionally lapsed into caricature, as in his admittedly hilarious attempt to recreate the stolen Prize Song. During their superb interactions, I couldn’t help wondering what it might be like if they traded roles some day?

Perhaps a bit lightweight for David, Appleby was frequently difficult to hear during his long disquisition on the peculiar art of mastersinging. He recovered nicely in the final act but tried too hard to act the goofy bumpkin. Debuting Claudia Mahnke made little impression as his diminutive Magdalene. The role seemed to sit awkwardly low for a mezzo who has had a long career performing high-lying roles like Marie in Wozzeck, the Komponist and Mère Marie in Dialogues des Carmélites. Perhaps she just wanted to sing at least once at the Met?

Absent for over a decade, Georg Zeppenfeld, who recently took on Hans Sachs in a new production for Dresden under Christian Thielemann, made a very welcome return to the company as a strikingly beneficent Pogner. His stern visage belied a soft heart and his large grainy bass filled the house beautifully prompting hopes that he’ll be a more regular visitor in a variety of roles. 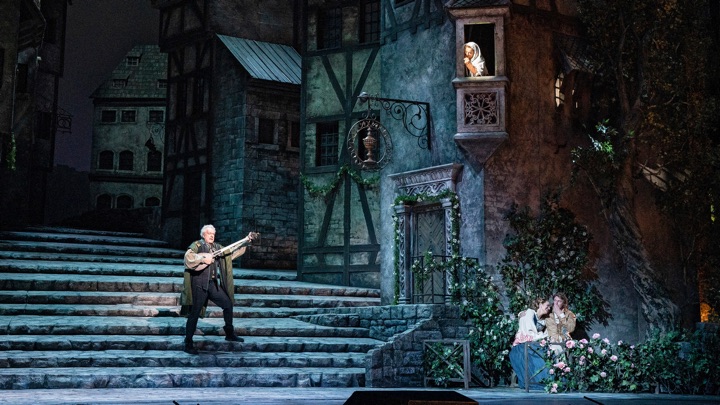 The Met, on the other hand, seems to only want Gantner as Kothner; he began roughly but warmed up to deliver well his chortling coloratura lecture to Walther. Alexander Tsymbalyuk was a deluxe Nightwatchman; the Met should give this fine Ukrainian bass-baritone more to do than this cameo and Timur!

Tuesday’s pair of lovers may likely divide opinion among those who attend this revival. Before I heard him for the first time live as Fidelio’s Florestan in 2017, based on broadcasts and recordings I was convinced I would hate Klaus Florian Vogt. Cruelly but not inaccurately dubbed a “heldentenorino” by the late Martin Bernheimer (I think) after his Met debut as Lohengrin, Vogt brings a startlingly reedy, seemingly lightweight voice to some of Wagner’s most demanding roles everywhere, particularly Bayreuth where he is a long-reigning star.

And, yes, in his early exchanges with Eva and David, he sounded quite pinched and puny. But when he launched into Walther’s first tentative attempt to join the mastersingers, he blossomed and like some of the assembled listeners onstage, I was won over. It shouldn’t work but somehow it does: his effortless, penetrating sound made the young knight’s challenging music sound like child’s play.

As he did as Parsifal at the Met in 2019, he plays “naïve” well, and the wonder of his “composition” of the Prize Song was beautifully delineated by him and Volle. I’ve been very lucky with my Met Walthers: Araiza, Heppner, Botha and now Vogt!

Under ordinary circumstances, having the anticipatory Meistersinger buzz revolve around its Eva would be downright bizarre. But this fall’s Eva is Lise Davidsen, the Norwegian soprano around whom so many future Wagner dreams swirl. A frustrating paradox ensued: Davidsen’s splendid vocal gifts were on display Tuesday night, yet they were all wrong for her role.

The fidgety coquettishness with Walther initially looked awkward but she soon settled into an earnest eagerness that was endearing. However, her lively dialogues with him and then with Sachs in the second act fell primarily in the less-interesting middle of her voice and didn’t project well at all. Her taking on the similarly conversational role of the Marschallin (announced for the Met in the near-future) might be quite unwise.

But then Walther appeared and we were suddenly transported to the opening of the second act of Tristan und Isolde: Davidsen could at last let loose her big bold soprano and it was thrilling! Vogt rushed to join her and ever so briefly we had left Meistersinger altogether. In the next act and at far greater length Davidsen (radiant in white) again exploded with a spellbinding “O Sachs, mein Freund” and you felt the entire house (regrettably just half-full) gasp and marvel at the steely amplitude of her outpouring. But Eva is no Valkyrie, and it sounded out of proportion to the musical moment.

Happily, she then showed that she could fine down her voice and spun an exquisite opening to the quintet. Then, for minutes time stood still as the other four joined her to weave Wagnerian magic. But then unfortunately Davidsen marred the sublime climax by rising to the high note fortissimo! The soprano’s fans though should definitely seek out one of the remaining five Meistersinger performances as she’ll likely not ever sing Eva again.

Many have remarked on moments that particularly moved them as they came back to live performances after months of deprivation. While my first opera was back in June, it took the cascading waves of last night’s first-act prelude to finally choke me up.

Pappano’s Wagner over the years at Covent Garden has been occasionally controversial, but I found his lovingly detailed Met Meistersinger mostly a success with the orchestra sounding enthusiastic and revivified. His third-act prelude too was ravishing. The chorus which had performed nobly in Boris Godunov too reveled in its rioting and celebrating.

Yes, I squirmed as a group of men auctioned off a young woman to the best mastersinger (WTF?!) followed by a scary encomium to Deutschland über Alles. And yet I admit (with no little guilt) that Meistersinger always makes me happy and if you can experience in the house this final (please!) go-round for the ancient Schenk, you definitely should go!

As a brief addendum as it features three of the Meistersinger principals, I’ll say that Pentatone’s new Beethoven Fidelio (recorded during April and November 2020 in Dresden) disappoints. Davidsen’s much anticipated Leonore remains a work-in-progress lacking warmth and spontaneity. Christian Elsner’s feeble Florestan lets down his savior sounding like he’s been in the dungeon for decades.