It’s back to business as usual at the Met, for better and for worse. 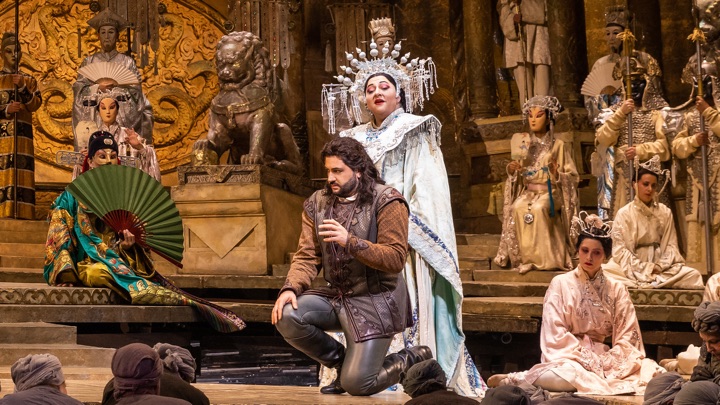 Watching the hoary glamour of Zeffirelli’s production of Turandot, now entering its 35th year, I realized the production itself is now an anachronism. It feels, increasingly, like a fever dream from another age, or perhaps a time machine. This is what opera was.

Every inch of the Met’s massive stage, which has a curious way of making even tall singers look tiny, fighting to remain unswallowed in its giant, open mouth, is covered: in people, in sets, in costumes, in glitter, in rainbow lights. Even in the ludicrous squalor of fake Peking, splashes of day-glow rainbow paint faintly glows as if from some long-forgotten rave. Oh, the jewels, the wigs, the gleaming polyester of Turandot’s hideous third-act gown! Who makes opera like this now? No one, I think. It feels (like Turandot itself) like a product of its time, a time capsule of 1980s excess.

Among my deeply conflicting feelings about this production: It’s old, tired, and extremely problematic. I felt almost ill watching this time, with a good number of white actors in “Chinese” wigs and the scuttling, scurrying obeisance of the crowd making them look more animal than human.

Its treatment of women is absurdly insulting (the last time I went without sex with a man I only murdered 11 people!), even without the racial stereotypes embodied by Turandot and Liù (not to mention Ping, Pang, and Pong), which are egregious.

One could say that these critiques are worn and tired; yet here we all are seeing Turandot again, unchanged after 35 years, so the critiques will just have to stand. The hopeful haze of progress created by Fire Shut Up in My Bones has burned away, and we’re back to what we’re used to.

As an introduction to opera, Turandot puts the art form’s greatest pleasures and greatest problems on display, unable to reconcile either. The arias are some of Puccini’s most beautiful and catchy; “Nessun dorma,” for all that it’s overplayed, can still bring little shivers down my arms when sung just right. 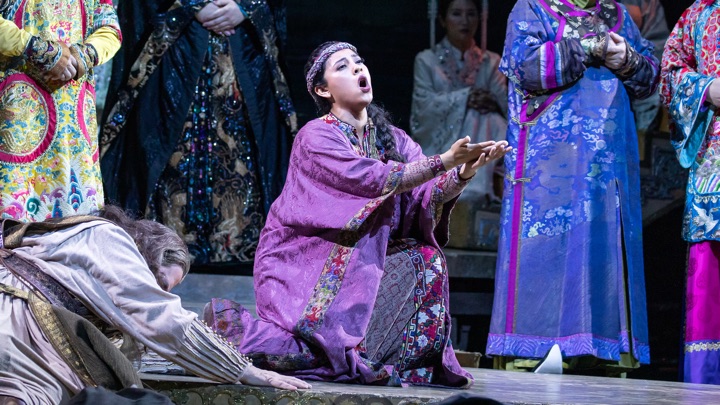 The opera is also disgustingly racist, made even worse by the consistent use of whitewashed casting and yellowface. (I think even my enjoyment of the music at times is highly suspect.) Should the Met retire this production? Probably. Yet it seems unlikely that this work will be dropping out of repertoire anytime soon, beloved as its tunes are.

Can you imagine a gritty realist production of this? Would that make it better? Or merely strip away the remaining artifice, making the problematic of its existence worse but boring now, too. Nor would I want any money spent on a new one. Save it for new works. Commission something by an Asian composer.

With this in mind, the overwhelming thing-ness of the Zeffirelli production begins to feel like a smoke screen; “Don’t think about it,” it says. Don’t think about how this text works in a modern world, just look at all the stuff! Look at the gold! The jewels! the sparkles! Clap for that extraordinary set change in Act II! Let us razzle-dazzle you.

When one has singers like we had Tuesday night, relaxing into dazzlement is seductive indeed. Musically, this was a near-unassailable performance. Marco Armiliato conducted with verve, enlivening the score, and most particularly the brass section, which sounded better than I ever remember hearing.

All of the leads were in fine voice, with Yusif Eyvazov especially delivering a positively textbook performance. “Nessun dorma” may as well be “Happy Birthday” for all the ease with which he sang it. His voice has been polished to golden, gleaming, suppleness, and last night he was full energy and intensity, even when the clunky blocking had him moving from pose to pose with no dramatic motivation.  Eyvazov is exactly what one wants in a Puccini tenor; he brings the right combination of pompousness and nobility to Calàf while still making him almost likeable.

Christine Goerke, she of the endearing Met livestream interviews (and of being an extraordinarily powerful and emotive soprano), sang the absolute hell out of Turandot last night. The air trembled around her. To my ear, there was not an off note in the whole show, and I had the pleasure of sinking in my seat as Goerke’s dynamic and forceful sound bored into my temples.. Lobotomize me, Princess! Make me forget.

(But, please, costume mistress, for the sake of all curvy women everywhere, kill that awful empire-waist Halloween-costume gown from the third act with fire).

Gabriella Reyes was equally good as Liù. “Signore, ascolta” showed an exceptionally dark, rich sound, more adult and sensual than I’m used to hearing, with a solid high register. In the third act, however, she turned a new corner, her voice lightening slightly to reveal a creamy warmth, beautifully textured and refined on top. She refreshed the whole third act, which has always slumped a bit after Calàf’s aria in my opinion.

Veteran bass-baritone James Morris appeared as Timur, with a pleasing clarity and strength to his tone.

All in all, this was, an eminently professional production by all of the artists on stage and in the pit. It’s exactly what one expects of the Met, polished singing combined with spectacle. But I left feeling more conflicted than ever about the future of this work in the modern world.

As Ping, Pang, and Pong, themselves say, “Turandot doesn’t exist.” She’s a fantasy, a ghost of early twentieth-century orientalism and here, late twentieth-century hedonistic capitalism, summoned again and again at the Met without any interest in exorcising her. How much longer can it go on before the final pieces of confetti flutter down?