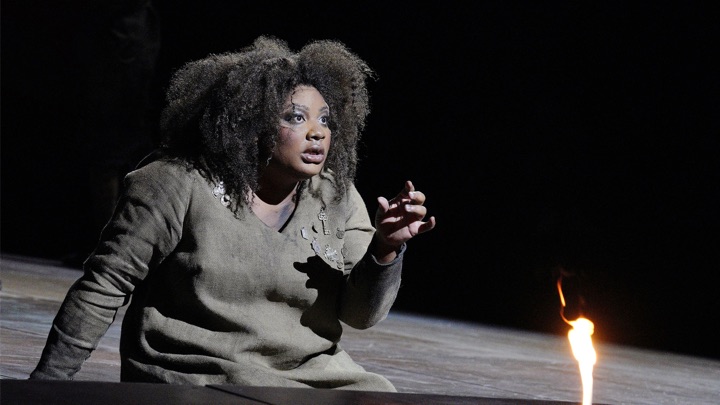 One of the big disappointments for me of an entire year being lost to global pandemic was the cancellation of LA Opera’s announced 2020/21 season. Luckily we’re not so enormous an operation that things couldn’t be re-shuffled forward. Sure we lost theatrical wizard Es Devlin’s Don Giovanni and Missy Mazzoli’s Breaking the Waves (both hopefully to be rescheduled) but the bulk of season’s offerings, with some cast changes, was simply laid on for ‘21/22. Then things got more complicated than expected.

The announced season opener was Verdi’s Il Trovatore in an existing co-production with Monte Carlo Opera, the Teatro Real Madrid, and the Royal Danish Opera Copenhagen. So naturally the sets were packed into four shipping containers bound for the Port of Los Angeles in San Pedro. Which, apparently, is where they still are due to the extreme bottlenecks plaguing ports around the globe and the lack of dockworkers. With ten days left before rehearsals were to begin it was all over local and classical media that LA Opera would actually build the set from scratch. I’m picturing our normally preternaturally composed President and CEO Christopher Koelsch weeping at his desk at this point.

So Saturday night, after yours truly has been cloistered like a novice in a nunnery for the past 18 months (and I wish I was kidding), I found my way to the Dorothy Chandler Pavilion fully vaccinated (and boosted) for my first public event save for racing in and out of my local Trader Joe’s (and only when absolutely necessary). Go, team Pfizer! Oh, and my tux still fits. Hooray (!)

Upon achieving the Music Center Plaza I was immediately greeted by one of the literally dozens of young people on hand to verify my vaccination status. After presenting my card and identification I was tricked out with a neon yellow wristband with the LA Opera logo on it so I could mingle freely amongst the attendees. Just like at Coachella.

Le tout Los Angeles were there and decked in full regalia. Many were the bejeweled masks worn with matching gowns and masked strangers felt somehow freer to compliment one another on ensemble and style in a society where we barely speak to our own neighbors of 20 years. Celebrity spotting (one of my favorite LA Opera Opening Night pastimes) was rendered virtually impossible, however. 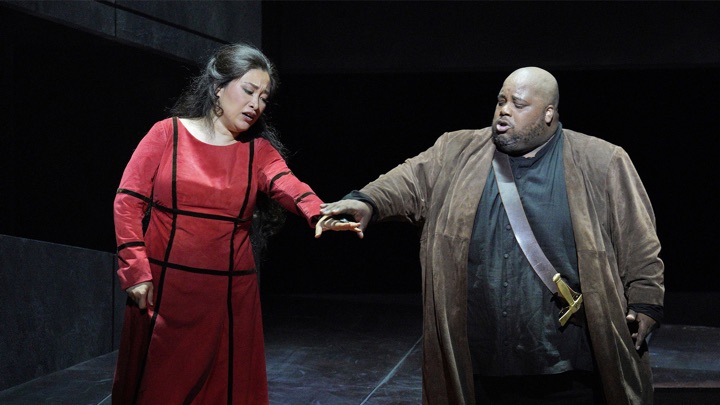 I should note that I’ve reviewed four dvd releases of Il Trovatore on these pages, probably own a dozen live and studio recordings and, having been baptised into opera fandom by the great Leontyne Price, probably had the libretto of Verdi’s great middle-period masterpiece phonetically memorized by the time I was twenty. Yet in nearly 40-years of opera going this was my first in person performance.

Infamously difficult to stage because of two running plotlines rife with off-stage events Director Francisco Negrin made it clear in a program note that he sees Trovatore as a ghost story about people haunted by their own past. My eyebrow went askance at two new characters added to the cast list in the program. The “Ghost of Azucena’s Mother” and the “Ghost of Azucena’s Son” respectively played by Christian Scott and Jimmy Harris.

Set and costume designer Louis Désiré designed a square concrete courtyard with an angled floor and surrounding galleries and trenches of varying depths. A catwalk inhabited by the Ghost of Azucena’s Mother raises and lowers at the rear accompanied by a stage spanning section of video screen. Another vertical video screen column travels left to right and back.

The men of the chorus were done up like the Walking Dead (ghosts?) while the women were in simple shifts accented with veils for the great abduction from the convent scene in Act II Scene 2. Male principles in dusters, our ladies in simple velvet frocks with a medieval line with Azucena in a long-sleeved smock with a filthy hem. So it hardly conjured 15th century Zaragosa. but then what production of Trovatore does these days?

There was a staged pantomime before the music began that included some of the production’s better effects that would have made a far stronger impression if they’d been deployed in the context of the drama. As much as I want to get behind this well-intentioned staging it actually ended up undermining some of the performers by distracting the audience’s attention at key moments. Oh and there’s a lot of propane and live fire effects happening on this stage. A lot. Dramatically though it’s mostly a muddle until an absolutely show-stopping final tableau that was so extravagant it practically redeemed all that came before it. 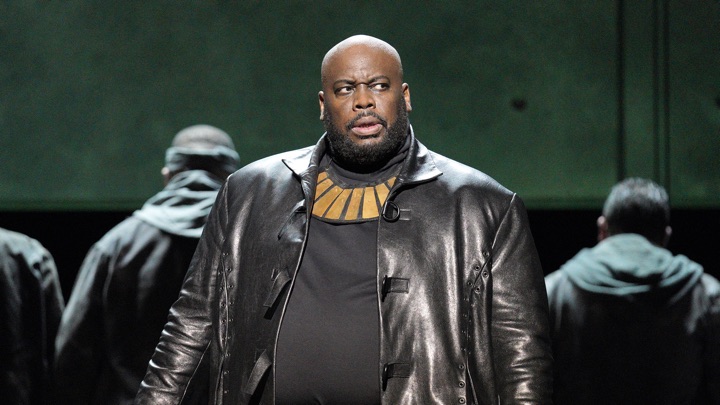 We got off to a strong start with Morris Robinson as Ferrando telling the story of the old Count di Luna and that baby to three young children. It’s one of the trickiest pieces Verdi wrote for bass and dripping with grace notes and trills and you rarely get this kind of star casting in live performance.

Vladimir Stoyanov was our Count di Luna and it’s immediately apparent how much experience he has in this role and with Verdi. I’m sorry it’s taken this long for his company debut as he’s had an international career going now for over 20-years. He wields a soft-grained voice with tremendous breath control and immaculate phrasing. At the start of ‘Il balen’ I briefly thought his slow tempo would be impossible to sustain and was glad to have been proven wrong. He is also a master at skulking about the stage as all good Verdi villains should.

I was initially disappointed when it was announced that we’d lost Angel Blue in her role debut as Leonora because of rescheduling problems. Yet with her recent, and much deserved, successes it was understandable her dance card was punched. I perked up considerably when Guangun Yu was announced for the part, since I’ve admired her in all her roles here at LA Opera including a ravishing Countess Rosina in both Corigliano’s Ghosts of Versailles and Mozart’s Nozze di Figaro plus 2019’s Vittelia in Clemenza di Tito.

Ms. Yu has a voice exquisite both in it’s quality and evenness of scale. Verdi wrote so much coloratura into the role, to say nothing of those famous high arching phrases, that its technical demands are arguably as considerable as Bellini’s Norma. I’ve never agreed with the casting of dramatic voices in a part that foremost requires maximum flexibility in aria and ensemble.

That said, Ms. Yu seemed more comfortable on descent rather than ascent in her cadenzas on Saturday night. Her passagework was fleet and the high filigree work culminated in a “D’amor sull’ali rosee” that redefined the word “limpid.” The voice is cool no doubt but as the evening progressed she managed some spectacular climaxes. She also moves well onstage and is a compelling actress when called upon. 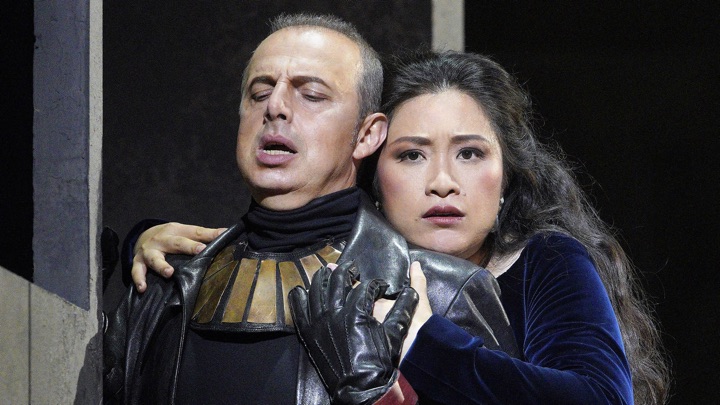 Tenor Limmie Pulliam has been something of a cult figure in YouTube clips I’ve seen pop up in the past year or two and when he was announced as the first cast Manrico (Gregory Kunde takes the final three of six performances) I was extremely curious to hear this singer in person.

He started out the performance with a burly tone and not a lot of poetry. By the wedding scene and in the lead up to ‘Ah si, ben mio’ he was doing some real piano singing of astonishing beauty. His melismas in the cavitina were quicksilver and the long phrasing and polish was all there. When he launched into “Di quella pira,” taking the first two phrases in one breath, it was one of the most exciting experiences I’ve ever had in the theater. His singing continued on that very high level for the rest of the evening. That said, Mr. Pulliam’s stature and ability to move easily onstage are a factor that cannot be ignored. I look forward to hearing him again soon.

Yet the biggest surprise of the evening came from our Azucena mezzo-soprano Raehann Bryce-Davis. I heard her last in a supporting role in Matthew Aucoin’s Eurydice but nothing could have prepared me for her portrayal of Verdi’s Romani sorceress. In a part I thought to be overplayed by almost everyone she presented a completely original interpretation that was fearless on nearly every level.

Ms. Bryce-Davis was so riveting at times, and her accents on the lower part of the role so daring, it was breathtaking. Her “Condotta ell’era in ceppo” left half the audience almost afraid to applaud rather than break the spell she’d just cast (I was one). This was also where the “Ghosts” in the staging bothered me most because she didn’t require the assistance dramatically and still managed to hold the audience in her thrall in spite of someone on a catwalk doing mime exercises behind her.

One can only wonder how much stronger the impression would have been without it. Her last act recitativo leading up to the duet with Mr. Pulliam was the first time that part of the score actually made a strong impression on me for whatever reason. More exciting is that she will surely grow in the role moving forward. Brava.

I was sorry to hear that our longtime Chorus Director Grant Gershon was leaving his post to concentrate fully on his work with LA Master Chorale. His contribution to the evening’s success showed in the full throated work of the chorus. Most especially with the men in their highly nuanced reading for the opening of Act III, Scene 1 which was a highlight.

None of this would be possible without the skilled hand of our Music Director and Conductor James Conlon. If my sources are correct his association with this opera goes all the way back to the Met in 1982 with Leontyne Price no less. So he’s been stoking these Verdian fires for a while now. A little stage/pit disconnect at times early in the evening when the chorus was hiding in their cubbies and also a few moments of tentativeness during cadenzas notwithstanding that I’m sure will disappear by the next performance.

The brass and the strings (double basses in particular) were especially tight and I was glad to hear that the ensemble that has reached world class status under his guidance has managed to hold themselves together. Maestro Conlon’s contract has been extended through the 2025 season and he has been a great gift to the company both because of his musicality and his dedication to educating his audience.

As to performance practice we did get repeats of cavatinas, only one go at the cabalettas, and all of the stretta finales (which was a nice change). Leonora got one go at “Tu vedrai che amore in terra” which has lately come back into favor. I would have dearly loved to have heard Mr. Pulliam take the repeat in ‘Di quella pira’ because it was indeed a moment.

LA Opera is also offering the option to Livestream the early October performances on their website for $30.