Last weekend, On Site Opera presented What Lies Beneath, a program of maritime-themed operatic excerpts staged aboard the 19th century schooner Wavertree (now a part of the South Street Seaport Museum). 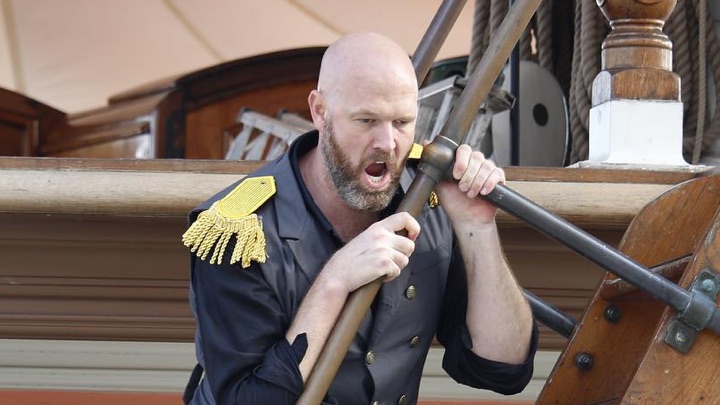 However, this ambitious selection often struggled to find its sea legs, despite a number of star turns.

In true OSO style, What Lies Beneath was a promenade production, resourcefully staged by co-directors Eric Einhorn and Winston A. Benons Jr. in various locations across the ship’s deck. At other times, the audience was split into two, with one half going towards the stern and the other towards the bow—watching two different vignettes simultaneously at opposite ends of the vessel.

Staging opera outdoors is a notoriously tricky business, and On Site Opera did not seem to have a consistent approach to overcoming its perils. The electric keyboards providing the accompaniments were amplified through a centralized cluster of booming speakers but the singers, perambulating about the ship, were only sometimes miked.

What’s more, the keyboards at the various performance locations on deck were set to radically different volumes. The keyboard by the mainsail was almost deafening (especially when sitting near the speaker) and, when combined with Rasaan Talu Green’s percussion, invariably drowned out unamplified singers; the keyboards aft and fore, however, struck a perfect balance with their respective singers.

This haphazard approach to sound design made an already loosely connected program seem all the more fragmented. Aside from the nautical topoi, there was little to link the six vignettes together thematically: two dealt with the misplaced anger of queer-coded, Melvillean sailors (Claggart’s aria from Billy Budd and Juliana Hall’s Ahab); two addressed the racialized violence of the middle passage (the Trickster’s aria from Anthony Davis’s Amistad and Damien Geter’s 1619: A Song Cycle); and two were sentimental reflections on the relationship between sea and society from the English musical renaissance (John Ireland’s “Sea Fever” and Maurya’s Lament from Ralph Vaughan Williams’s Riders to the Sea).

While each vignette was compelling in its own right, it was not necessarily easy to detect an overriding message. Nor was it always clear what this thalassic miscellany—evidently curated around the performance’s magnificent venue—was trying to say about the Wavertree and the “age of sail” that it represents.

This thematic ambivalence result in jarring moments of paradox: Ireland’s “Sea Fever,” a homespun ode to the simple pleasures of the sailor’s life, was soon followed by Geter’s 1619, a searing indictment of the maritime technologies that enabled the enslavement of Africans. If such antinomies were intentional, then not nearly enough was done to highlight the (often horrifying) ironies arising from them.

Tenor Bernard Holcomb sang the Trickster’s aria from Anthony Davis’s 1997 opera Amistad from the catwalk jutting out of the ship’s poop deck. Unfortunately, the unamplified Holcomb—a number of feet off the ground and competing with the overzealous audio system, the constant hum of Manhattan traffic, and the sporadic roar of passing airplanes—was all but inaudible from where I sat.

Davis’s score brims with color and light: moments of playful pointillism and smoky impressionism give way unexpectedly to jazzy grooves. (It is an opera that certainly deserves to be better known). Perhaps it was the limitations of the sound system or perhaps it was the awkward piano reduction, but pianist Byron Burford-Phearse never quite captured these inflections, presenting a rendition of Davis’s aria that seemed all too strident, all too unrelenting.

Holcomb, struggling to be heard over top of this, likewise performed the aria with too much frenzy, too much strain, never allowing his energy to wax and wane with meaning of the text.

If the Trickster’s aria was mired in an excess of energy, Claggart’s aria from Billy Budd suffered from a distinct lack of it. Matthew Anchel never seemed to fully embody the envious Master at Arms: gestures were stiff, movements lacked intention, and lyrics were obscured by an overly darkened bass timbre.

Moreover, the decision to costume Claggart like some villainous leather queen (replete with harness and vest) took the covert homosexuality of his character out of the realm of E. M. Forster and into the realm of Tom of Finland.

And the ensemble sang absolutely exquisitely. It was not a blended choral sound, but, rather, a vibrant heterogenous soundscape that highlighted the individuality of the singers it comprised.

Regrettably, the company chose to split the song cycle over two different points in the program, a decision which somewhat undermined the piece’s structural integrity. While the first four songs worked splendidly as a set, the last two contained some of Geter’s patchiest writing and fell flat when severed from their more arresting counterparts.

The undisputable highlight of the performance was Zachary James’s tour-de-force, world premiere performance of Juliana Hall’s Moby-Dick-themed monodrama, Ahab. Hall’s work depicts Captain Ahab at the moment of the Pequod’s destruction, caught somewhere between an insatiable drive to catch the white whale and the dawning realization of the devastation that he has wrought upon his crew.

James captured this tension perfectly, veering between roaring paroxysms and piteous whimpering as he launched himself up and down the stairs of the poop deck. Wild-eyed and metallic-voiced, James transformed the acerbic atonality of Hall’s score into a searing psychological hellscape—equal parts claustrophobic and volatile.

The evening closed with a rendition of Maurya’s lament from Ralph Vaughan Williams’s 1927 one-act opera, Riders to the Sea, sung with stoic elegance by Tesia Kwarteng. Her rich mezzo-soprano buttressed the lilting pastoralism of Vaughan Williams’s score, sounding more lustrous and less worn than your average Maurya.

Mercifully, although Kwarteng was positioned high above the audience on the ship’s catwalk, she was given a microphone and thus all the sumptuous nuances of her interpretation could be heard above the surging din of the chorus.

On a more practical note: as post-lockdown operatic experiences go, this was, perhaps, the perfect transitional step between total operatic drought and a packed house at the Met. Performed entirely outdoors, with a small, masked, vaccinated, socially distanced audience, What Lies Beneath felt very safe indeed. If you are looking for a way to ease back into opera-going, On Site Opera is definitely the way to go.