Pauline Viardot's Cendrillon hews closer to the Perrault original than either Rossini or Massenet’s more familiar retellings and is dainty in conception as a salon opera for her students. 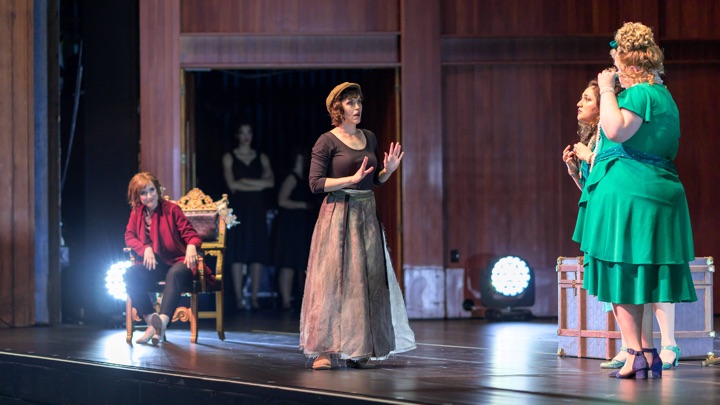 “‘Her technical skill alone is immense; in the completeness of her chromatic scale she is, probably, without a rival,’ said an article published in Fraser’s Magazine, a London journal, in 1848. But, the writer went on, ‘the principal feature which characterizes her is the dramatic warmth of her impersonations. She throws herself heart and soul into a part.’

This was the quote that struck me most from Hilary Poriss’s recent NYT intro to the legacy of Pauline Viardot, whose Cendrillon received maybe its highest profile US production to-date at Wolf Trap last weekend. I’m ashamed to admit that, outside of a memorable cameo in Matthew Gallaway’s The Metropolis Case, one of my more memorable if overly sophisticated high school summer reading books, I wasn’t familiar with Viardot’s oeuvre.

But the quote resonated because, for a figure whose legacy is so closely linked to the vocal pedagogy dynasty started by her legendary father (Manuel Garcia) who so effectively reared her sister (Maria Malibran), it less occurred to me that this sort of studied, seminal mode of singing might, for the innovation of Viardot and her milieu, portend any sort of dramatic interest, too. That “good singing” is not truly good singing unless it’s lands dramatically as well as technically. That’s a tall order that only highlights the achievement of operas composed to marry the two and what impresses about Viardot even after 200 underrated years.

Either way, though, her Cendrillon hews closer to the Perrault original than either Rossini or Massenet’s more familiar retellings and is dainty in conception as a salon opera for her students, its distinct characters, musical compactness, recognizably bel canto-style harmonic lingo, and ensemble-oriented dramatic flow mark it as challenging yet fertile territory for young singers while avoiding sounding like some sort of didactic exercise. If Cendrillon, set to her own libretto, represents Viardot’s legacy of challenge-by-example, it’s a charming and sophisticated one worth more time admiring.

Some of the work’s finest qualities shone through in its Wolf Trap presentation, an unabashed attempt to scale up a piece more intimate than the mammoth Filene Center (or even most smaller venues) might sensibly house, and inventive new orchestrations by David Hanlon (the work was originally composed just for piano accompaniment) bolstered some of the score’s finer details.

But, in a misguided effort to girlboss Cinderella into the 21st century, the adaptation grafted “spunky” English-language narration by the Fairy Godmother, a swaggering Alexandra Nowakowski, whose subtle tremulousness gave her pearly coloratura a celestial cast, in between set pieces. Not clear if this was director Amanda Conlon’s innovation, since otherwise the staging was cute, musical, and clean, but it managed to both condescend (who there didn’t know the basic premise of Cinderella?) and infantilize (at the end, Cendrillon turned to the audience and said, “I get to write my own ending!”)

Shannon Jennings, a soprano who exudes her own animated earnestness, stood at the center of the guileless evening as Cendrillon. Her ample, slightly covered soprano carried easily and her thorough commitment to bookishness, enlivened by solid singing, in what could easily be mistaken for a prima donna role was impressive.

Yet sparks flew most acutely in her interactions not with Prince Charming, a steady if slightly bleaty Christopher Bozeka, but with his valet, as sung by tenor Joseph Leppek, who trades places at the beginning with the Prince (à la Rossini) to suss out the fairest in the land unencumbered by wealth. His singing swelling way beyond chamber opera size, Leppek elevated a supporting role into something much meatier with noticeable depth in his lower range and a panache unique among his colleagues. Gretchen Krupp as Armelinde made a similar impact, lending her arrestingly pungent mezzo to the preening antics of one of Cendrillon’s stepsisters. And Jonathan Bryan, as their father, sounded smooth and firm across his limited range.

Cendrillon, which runs about one hour, formed the first half of a double bill with Gustav Holst’s oppressively boring Savitri. Taken from the Sanskrit Mahabharata, in which a steady wife bargains with Death for the life of her husband and eventually wins on a technicality, it has all the makings of your favorite modernist monodramas with three times the characters and none of the musical interest.

It fell upon Leia Lensing in the title role to carry the show. Her mellow mezzo weathered the rangy part, written to be more cantillated than outright sung, without strain. If she never seemed galvanized by the music, that’s more the fault of the score which places relentless and unvaried emphasis on the character’s internal inquietude.

In both operas, Kelly Kuo conducted the small orchestra with detail and consistency and, most notably in Cendrillon, ensembles satisfyingly coalesced with assuredness and ease. These performances may have signaled the formal conclusion of Wolf Trap Opera for the summer (only concerts with higher profile singers remain), but, especially in the case of the former opera, it hopefully signals a refreshed beginning for both Viardot’s piece and the careers of several of the very worthy singers that performed it.