When LA Opera finally decided to put a toe in the water and mount its first production since the start of the Covid-19 pandemic, it was Igor Stravinsky's opera/oratorio Oedipus Rex. 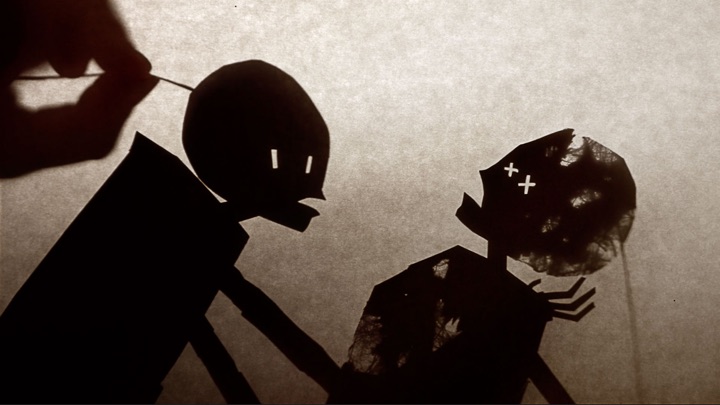 Igor Stravinsky settled in Los Angeles in 1940 just a year after arriving in the United States for a brief lecture stint at Yale. Seeking to not only avoid the Nazis, he was also in search of a warmer climate to soothe his various ailments. He’d also become disenchanted with the Parisian public’s reactions to his compositions and America was far more inviting with commissions and wealthy patrons.

He quickly settled in a fairly modest three-bedroom home in the hills just above the Sunset Strip. It was there that he and his great friend Aldous Huxley hosted their famous Saturday brunches which included many of the famous writers, musicians, composers, and conductors who had all fled the growing political scourge in Europe.

His influence over the cultural life of our city was immediate. His famous Le Sacre du Printemps had already had its west coast debut with Eugene Goosens leading the Hollywood Bowl Orchestra in 1928 and Stravinsky himself made his first appearance with the Los Angeles Philharmonic just seven years later. 1940 was also the year of the debut of Disney’s Fantasia the great centerpiece of which was Stravinsky’s Sacre set to the images of the creation of life and the Mesozoic period with its blood-thirsty Tyrannosaurus Rex. Through the years in fact the Sacre has become a sort of compass rose of the Philharmonic’s repertoire with each new music director putting his own stamp on the work.

So it should come as no surprise that when LA Opera finally decided to put a toe in the water and mount its first production since the start of the Covid-19 Pandemic it would be the great man’s opera/oratorio Oedipus Rex.  The entire production has been generously underwritten by Terri and Jerry M. Kohl and “>can be viewed for free, although a donation of any size is encouraged.

Oedipus Rex is a powerful work that has sat on the fringes of the orchestral repertoire since its premiere and not without reason. It’s musical difficulties are only matched by the challenges in staging it. The composer’s wish was to have the singers masked. He chose to set the text in Latin with only a narrator to relate the events of the story to the audience. It’s popularity in the opera house has grown since the 1960’s and culminated in Julie Taymor’s bleakly-opulent production for the Saito Kinen Festival which was filmed, broadcast on PBS, and released to home video.

This new production stands amongst the very best of modern interpretations. Not only because of the strength of the musical team assembled but the ingenious visuals that tell the story throughout..

The Orchestra and Chorus of the LA Opera were filmed together and separately utilizing the full stage of the Dorothy Chandler Pavilion (which is a lot vaster than I thought) with the orchestra members masked and everyone socially distanced. Then the soloists were filmed at the apron with a rear projection screen behind them. Shadow puppets designed by the Chicago group Manual Cinema relate the story elements at key moments and all of this is masterfully combined by director Matthew Diamond. 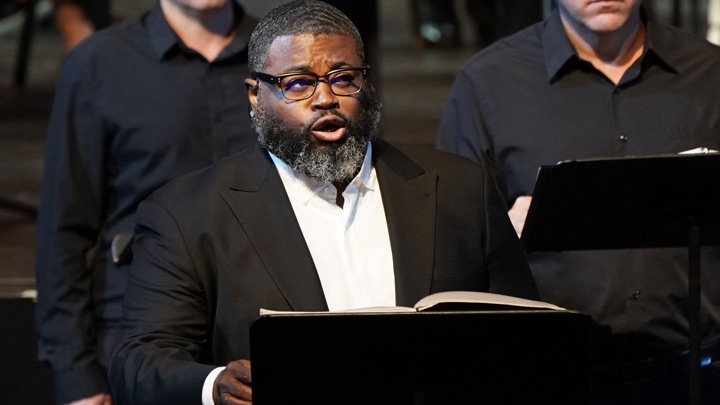 I have to recognize the technical team first and foremost for the best sounding recording I’ve ever heard of this piece. What must have been a logistical nightmare in combining all of these instrumentalists and singers performances required an army of technical staff listed in the closing credits. I was astonished, again and again, by the clarity of the playing and the skill with which it was captured and presented.

Stephen Fry was engaged to read the narration written by Jean Cocteau and nimbly translated into English by e.e. cummings. What with all of Hollywood in their backyard it was an inspired choice. Mr. Fry obviously knows his way around the classics and I can hardly imagine finding a local movie star who could bring the same combination of amiability and gravitas to the proceedings.

A veritable dream cast of singers starts with Russell Thomas as Sophocles’ doomed King. An oblivious leader ruling over a country stricken by plague (stop me if you’ve heard this one before). Let’s face it, Stravinsky didn’t write the most grateful music for the voice. It’s a challenge to everyone’s technique and the writing for Oedipus is particularly schizophrenic vocally. Consequently the tenors charged with the leading role fall mostly into two disparate categories. Those who are good on the high clarion passages, who are usually of the Helden breed, and the Mozart singers who find the more introspective parts a good fit. No such compromise is necessary with Mr. Thomas who proves his incredible versatility yet again. He sails through the role with nary a sign of strain or discomfort. His public utterances ring out generously and he’s able to scale down to a mesmerizing whisper when it’s required of him.

John Relyea does the hat trick of singing both Creon, the brother of Jocasta, and the Messenger in the final scene. Creon is the real meat here and Stravinsky builds his single aria like an orchestral pile-on against the bass culminating in that long held note that is essentially the climax of the role. Mr. Relyea looked to me like he was suffering an indisposition, but he’s too much of a pro to actually sound like he is. His single sentence repeated utterance of the Messenger in the final scene is resounding in all the right ways.

The blind soothsayer Tiresias enters next, sung by Morris Robinson. I feel fortunate every time I hear this man sing. The voice is so round and plush and his command is total.

I should mention that up until now the 16-members of the LA Opera Men’s Chorus have been doing a superlative job with the heavy lifting that’s necessary in this work. Stravinsky’s rhythms and word setting are so unbelievably tricky and to sound this strong with just these voices, plus being socially distanced (no leaning an ear on the guy next to you), has to be like qualifying try-outs for the choral olympics. Now they have to sing the lung-busting “Gloria” welcoming Jocasta to the stage. Not once but twice. As I recall (vividly from my galley years in the Baltimore Symphony Chorus) it sits on an A-natural for the tenors. And sits there. These gentlemen cover themselves in glory and I bow low.

Now we get to the really good stuff because our Jocasta was the formidable J’Nai Bridges. First off she looked like a million bucks in a form-fitting, black lace, off the shoulder dress with matching lace cape that mirrored her shadow puppet counterpart in the video presentation. Then she starts to sing and her intensity is only matched by the elegant (and dare I use the word) contralto tone that is just flowing from her. 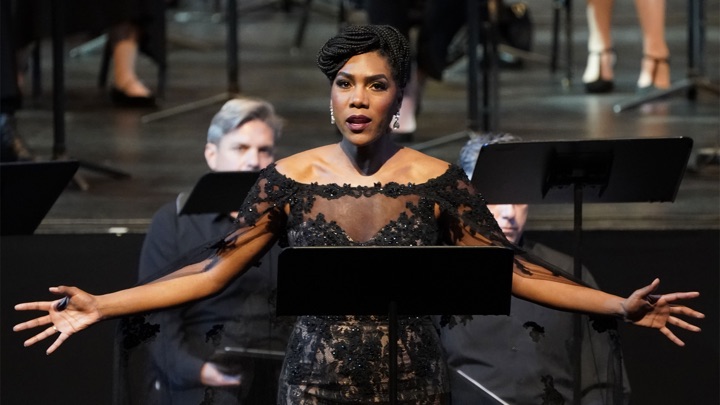 It would be dishonest not to mention that the very tip-top of the role seems to tax her here but I’m calling that situational. Mr. Stravinsky was writing for the bottom of this voice and it’s lush in the extreme and all I could think of was Saint-Saëns’ Dalila (please someone hear my prayer). She also gets the most pungent lines in the latin when we get to the “Oracula mentita sunt” and she’s fierce and compelling in all the right ways.

Finally budding Heldentenor and (I’m very happy to report) member of the young artists program here, Robert Stahley, proved in just his few lines that this is a singer to watch out for.

Music Director and Conductor James Conlon demonstrated again and again what an extraordinary leader he is. The challenge of keeping everyone together with the social distancing would be difficult enough in a standard work let alone something as exacting and precise as this. Plus being masked and only able to communicate with his hands and eyes. The orchestral performance is remarkable for its inciviness and strength. Nothing tentative; relentless in its forward motion just like the story.

The contribution of Manual Cinema; Drew Dir who storyboarded and designed the puppet characters and then directed and edited these segments, along with Lizi Breit, Sarah Fornace, and Julia Miller who all worked as puppeteers along with him cannot be praised highly enough. Stick figures of the simplest design possible in a monochrome color scheme with backgrounds and lighting that owe much to German expressionist cinema.

The confrontation at the three crossroads, the discovery of the abandoned infant Oedipus, Jocasta’s suicide were all strikingly rendered in these semi-transparent images. When Oedipus throws open the palace doors after blinding himself he’s actually sobbing. It’s a stick figure and the way the moment is portrayed is extraordinary. Also the hands of the animators act as commentators on the action which proves especially moving in the final moments.

LA Opera has had its share of artistic triumphs over the years and this has to rank among its finest. I’m hoping someone’s planning a commercial release because I only count one dvd currently available and this performance is too good to be lost to the cloud. It’s streaming at the LA Opera site until July 18.