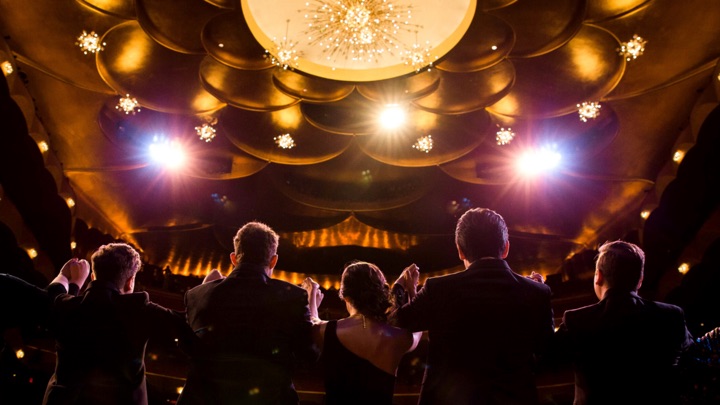 The Laffont family’s sizeable donation is undoubtedly a huge boon for the National Council. Indeed, the discrepancy in funding between this competition and the Metropolitan Opera’s mainstage events has never been more evident than in this new online modality.

That being said, the online format garnered a multinational viewership of over 6500 people (far more than could fit in the Met’s auditorium), and will no doubt attract more viewers on-demand. Although the competition’s ten young finalists did not have the chance to sing on the Met stage, one hopes that this digital platform will provide them with greater international exposure than any in-person event.

The ten contestants were spread out across the globe. Each had their own accompanist and their own camera set-up. Two were streaming in from South Korea, performing their numbers at five in the morning. Others were dispersed across the country. Only one streamed in from New York City.

The staggering logistical challenges posed by this set-up necessitated a number of changes to the usual organization of the competition’s program: while, in past years, the performers sang one number in the first half and one in the second, this year, the performers sang both their numbers as a set, making it more difficult to compare the voices of the ten finalists.

Other aspects of the program cannot be explained away by the new digital format: a remarkable preponderance of Mozart (including two performances of “Deh per questo istante solo” from La Clemenza di Tito); a surprising paucity of Italian bel canto repertoire; and (perhaps strangest of all) two performances of “I Want Magic” from André Previn’s 1995 A Streetcar Named Desire (an aria originally written for National Council winner Renée Fleming, and which naturally invites comparison with the operatic superstar).

The first to take on Previn’s work was Brittany Olivia Logan, who brought a rich, powerful tone and a mesmerizing stage presence to bear on this aria. And while the longer phrases of her second number, “Senza mamma” from Suor Angelica, seemed to pose a greater challenge to the soprano (particularly in the softer middle portion of the voice), Logan hit her stride as the aria went on, finding moments of light and shade in the sustained Puccinian lines.

Emily Sierra was a paragon of poise and control in her performance of “Deh per questo istante solo,” seemingly unfazed by the strange, angular leaps of Mozart’s adagio. Sierra brought a healthy dose Mozartian drama to the allegro, easily catching the quickfire mood changes without overplaying them. (Sierra’s ornamentations deserve a special shout-out here: they were absolutely exquisite). Sierra camped it up for her performance of “Ich lade gern mir Gäste ein” from Die Fledermaus, hiccupping and gesticulating with champagne-infused vigor; yet, her luxuriant velveteen tone still led a welcome air of class to the number.

Erica Petrocelli’s “Come scoglio” didn’t always exhibit the kind of color and contrast that one might expect from this aria. The lower register, in particular, lacked bite, while higher passages often felt a tad overblown; I yearned for her to find some moments of levity and vulnerability in Fiordiligi’s character. Her performance of “Amour, ranime mon courage” from Roméo et Juliette was more successful: better suited to the size and scope of Petrocelli’s voice, this aria allowed her to lean into Gounod’s brazen Romanticism.

One of the highlights of the afternoon was Duke Kim’s performance of “Dies Bildnis ist bezaubernd schön” – a refreshingly weighty interpretation, of unrelenting and unexpected fervor, delivered with bucketloads of tenorial squillo. His second aria, “Pour mon âme!,” was a less ideal choice. Kim’s high Cs, while certainly very robust, were nowhere near as sweet as the rest of his voice. Fortunately, Kim did not deign to treat this aria as a mere showpiece, finding rare moments of adumbral contrast in Donizetti’s glittering score.

Emily Treigle’s firm, muscular mezzo-soprano lent conviction and intensity to Gluck’s “Addio, addio, o miei sospiri,” although her coloratura could occasionally be a tad tight, and maybe a little sluggish. She delivered a similarly supercharged performance of “Deh per questo istante solo,” dispensing the allegro with plenty of pluck and verve.

The phrasing of Timothy Murray’s “E fra quest’ansie in eterno vivrai” was often slightly too deliberate for my taste, but his interpretation was impassioned and his upper register, in particular, was exciting and sonorous. His performance of the Count’s aria from Le Nozze di Figaro carefully balanced drama and musicality, particularly in the recitative, which had a wild, rollicking energy.

Murrella Parton possessed a sunny, forward tone – very different from the other soprani in the competition, and well suited to her first number, Verdi’s “Tacea la notte placida.” Her delightfully nuanced performance of “I Want Magic” demonstrated an exquisite attention to the text – heartrendingly delivered and beautifully tailored to Previn’s music.

Hyoyoung Kim exhibited a striking high-register coloratura in her performances of “Caro nome” and the “Bell Song” – equal parts metallic and buoyant. However, I had hoped for a bit more give and take in the less flashy portions of the arias – both in terms of dynamics and rubato. Although these numbers were beautifully rendered, both were sung a tad too uniformly for the high-stakes dramatic narratives they depict.

Jongwon Han’s sweet, silky baritone perfectly contrasted the dark, brooding textures of “Ves tabor spit” from Rachmaninoff’s Aleko. His “Catalog” aria, by contrast, was charming and witty, with a slightly heavier, punchier tone, Han proving that he was unafraid to explore the darker corners of his voice.

Prizes of $20,000 were awarded to the five winners: Emily Sierra, Raven McMillon, Duke Kim, Emily Treigle, and Hyoyoung Kim. The remaining finalists received $10,000. Of the five winners, Duke Kim and Emily Sierra were, for me, clear frontrunners. Their Mozart interpretations in particular were outstanding and (hopefully) herald a new generation of Mozartians at the Met. These are certainly singers to watch!