“Spring has sprung,” announces MasterVoices’ director Ted Sperling with a smile at the beginning of Part III. And indeed, even the doomsayers among us (and I count myself one) can’t help but feel signs of cautious optimism, as the world we knew slowly but noticeably begins to re-emerge. 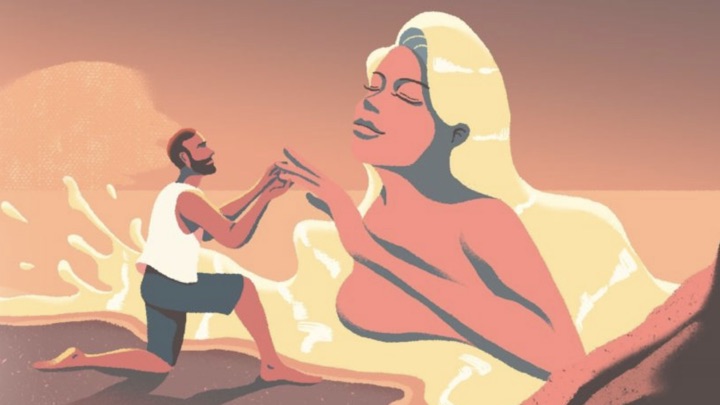 Among the online creative projects that have anchored the pandemic is this four-part exploration of Adam Guettel’s intriguing puzzle-box of work, Myths and Hymns. It’s an engrossing project, since virtually every element of the piece invites questions—beginning with exactly what it is. Is it a song cycle, an oratorio, a series of tiny miniature operas? Is it serious or comedic? Is it (as the title suggests) about Greek antiquity and religion? Or is it contemporary?

To all these questions, I offer a resounding “yes.”

And I can think of no group better positioned than MasterVoices to give Myths and Hymns a platform. I say this despite the fact that here, they are displaying becoming modesty, since the work focuses more on solo performers than the chorus.

But the MasterVoices, though often in the background, are its life’s blood. And that, too, feels right for this ensemble, who have proven over and over to be one of New York’s most treasurable—and flexible—resources. As a superbly cohesive classical ensemble, they’re at the top of the list for traditional choral music. When given the opportunity to explore outside the box repertoire, as they do here, they’re even better.

Part I of MasterVoices’ Myths and Hymns rolled out via YouTube in January, when I reviewed it here. Since then, Parts II and III have come out, and I’m catching up with both now. The final installment will be unveiled in May. Each is less than 30 minutes, and I would recommend watching them individually, and then—when they’re all together and available on YouTube—watching again. I think you’ll find the new connections open up with each viewing.

Till then, a few of the notable moments in this group:

Part II is subtitled “Work,” but as with all of Myths and Hymns, the topic is viewed in a very broad way. After a choral introduction (“Up and Down and Over and Over”) that suggests assembly line monotony, we veer into territory that is ambiguously religious.

Countertenor Anthony Roth Costanzo offers a hauntingly sung invocation in “Children of the Heavenly King,” before being joined for a brighter more march-like “At the Sounding,” which also brings in more A-Team guests: soprano Ailyn Pérez and tenor Nicholas Phan. (Costanzo, by the way, is a major force in this particular section, including as a director, and his presence here captures his distinctive combination of earnestness and impishness—for his legion of fans, this is a veritable “Arc de Triomphe”!)

Some will, I’m sure, enjoy the spoken word section of “Sisyphus,” read winkingly by John Lithgow, more than I did. For me, it’s too twee. I’d direct you instead to two lovely and more lyrical sections—“Life is But a Dream,” sung by Shoshana Bean with unusual and very pleasing restraint, and especially the haunting “Build a Bridge,” gorgeously delivered by Michael McElroy.

Part III is subtitled “Love,” but again it’s a complicated set of intertwined scenarios. The emphasis here too is on soloists, and I particularly enjoyed seeing and hearing Cheyenne Jackson, in excellent voice, in a more serious mode than usual.

Two extended sequences illustrate Guettel’s ability to create fleeting but powerful dramas which last only minutes. “Come to Jesus,” imaginatively directed by no less than Victoria Clark, is a meditation on connections made and missed in contemporary life. Soprano Shereen Pimentel confirms the fine impression she made in Ivo van Hove’s West Side Story, and Drew Gehling is her appealing partner.

Medusa again takes on Greek mythology in a deeply quirky way, with Nina Bernstein giving voice (largely through speech and sobs) to the title character, along with additional narration by John Branch as Perseus, son of Zeus. As with Sisyphus in Part II, this isn’t my favorite Guettel mode, but I did appreciate the significant contribution of the vocal ensemble—especially MasterVoices’ mellifluous baritone, John Brancy.

For me, the best moment here is the last—soprano Dove Cameron in “How Can I Lose You?” a charmingly elliptical little waltz that reminds us that Guettel is the grandson of America’s own Waltz-meister, Richard Rodgers. Cameron is enchanting in every way, and the vignette is delicious.

Finally, as an encore, I strongly recommend that you watch MasterVoices’ Tribute of Gratitude to New York, where the group sings Randall Thompson’s ravishing “Alleluia” over a wonderful collection of images. It’s six minutes that I guarantee will make you simultaneously smile and weep.

We do have much to be grateful for… including MasterVoices as a continuing, vibrant presence in our cultural life.