Conceived by Adam Guettel as a song cycle that explores human relationships to the gods across the span of history into today, Myths and Hymns has been seen and heard in concert and staged settings, and some of the individual songs are often performed in cabaret. 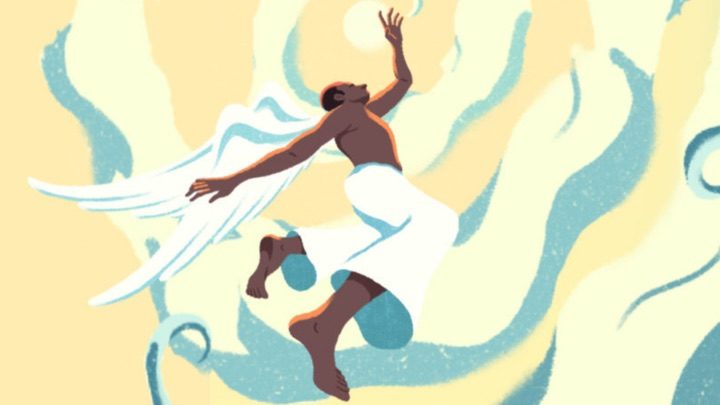 As New York culture elite resumes go, you’d be hard pressed to do better than this: Adam Guettel is a third-generation musical theater composer (his grandfather is Richard Rodgers, and his mother is Mary Rodgers). As a boy soprano, he appeared in 32 performances at the Met, including six as Yniold in Pelléas et Mélisande. Guettel, who also writes lyrics and occasionally performs as a singer and instrumentalist, is alum of Phillips Exeter and Yale.

But I hasten to add—if the legacy is blue-chip, Guettel’s own achievements are still more so. Probably his best-known work is The Light in the Piazza, for which he wrote both music and lyrics, and to my mind it’s one of the two greatest musical theater scores of the last 25 years (the other is Grey Gardens). Something close to an operetta or chamber opera, LITP is a magically sensual, tuneful extravaganza.

And both are quite different again from Myths and Hymns, which has now been around for 25 years in various forms. Conceived by Guettel as a song cycle that explores human relationships to the gods across the span of history into today, it has been seen and heard in concert and staged settings, and some of the individual songs are often performed in cabaret. “Migratory V” has been recorded by Audra McDonald, Betty Buckley and Judy Kuhn, among others.

That song is one of six seen in a wonderfully eclectic 30-minute video presentation by New York’s beloved MasterVoices ensemble, performing with a group of soloists that is every bit as distinguished as Guettel himself: they include Renée Fleming, Julia Bullock, Norm Lewis, Kelli O’Hara, Joshua Henry, Jose Llana, Capathia Jenkins, Take Six and more. (See what I mean about eclectic?)

This particular “drop” (as the kids say) is a first chapter in what will ultimately be four releases and a total of 24 songs. Three more installments will be released in February, April, and May at which point the entire work will be available for streaming free of charge on YouTube through June 30.

My plan is to write about them in groups as they are released, and possibly to do some summing up commentary at the end. I encourage you to watch them that way, too. But already, based on this installment, I’m prepared to believe that MasterVoices’ epic project will be the best showcase Myths and Hymns has yet received.

The musical values are, of course, superbly served—the list of participants alone should tell you that. To my mind, the streaming platform is pretty much an ideal way to experience this piece, which works as well in excerpts or in random order as it does when taken as a whole.

There is, of course, a thematic arc—really, “arcs” plural—to Myths and Hymns. But the COVID quarantine gives new resonance to Guettel’s music and lyrics. This section is called “Flight,” which indeed is a motif in several of the source stories (Icarus and Pegasus among them). But as we repeatedly watch and hear the soloists consider the heavens and some sense of upward momentum, we are more keenly aware than ever of how fragile and earthbound we mortals be.

Each sequence is directed and designed as a separate entity. Self-recorded videos of the soloists are augmented by fanciful animation, as well as some artful location photography.

Icarus is to me the most accessible of these songs, an irresistibly smooth R&B number that playfully puts the famous story in a wry contemporary context. Norm Lewis sings gloriously across a huge range—indeed, this is the best I’ve heard him sound in years—and he’s paired with the similarly terrific Mykal Kilgore and, of course, MasterVoices themselves.

Pegagus. If Icarus is the catchiest song here, this is quirkiest, and it will tell you a lot about the variety of Guettel’s palette. It begins here with a spoken introduction by the divinely quirky—indeed unique—Annie Golden, who, by the way, is a Myths and Hymns veteran. As it moves on, the style evolves, offering interesting opportunities to Jose Llana (winningly boyish and clarion-voiced), Capathia Jenkins (also clarion, and lots of fun!) and Elizabeth Stanley (also fun, and vocally virtuosic). By the way, that’s Guettel himself whom you’ll glimpse playing the guitar.

Migratory V. Usually performed as a solo, this song gets the Rolls Royce treatment by a trio of star sopranos—Fleming, Bullock and O’Hara, no less, who individually and collectively limn the emotion in a moving ballad whose title evokes the characteristic pattern of birds in flight. (Please tell me that some clever soul thought to record Bullock, Fleming, and O’Hara in “Sing for Your Supper,” as an encore bonne bouche to be used some context or other!)

I’m still in awe that the close harmonies could be so skillfully achieved in isolation, but of course, that’s MasterVoices’s brand. I’m equally impressed by the visuals, created by artists including director Lear de Bessonet, illustrators including Yazmany Arboleda and Cloud Chatanda, and others. (I’m also in love with the names!)

Okay, now it’s your turn to enjoy it. You might also want to check out this episode of Stars in the House, which features interviews and conversation with a number of the participants.