It was a meaty program. But both singers had the chops for it. 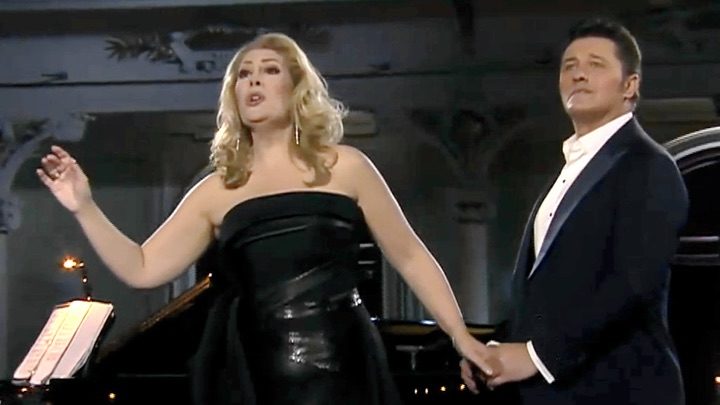 Sondra Radvanovsky and Piotr Beczala triumphed in the latest Met Stars Live in HD offering on Saturday afternoon, with a program that was unashamedly dark and unremittingly beautiful.

The soprano-tenor duo presented a stylish selection of Italian and Eastern European repertoire in the cavernous Historische Stadthalle in Wuppertal, Germany, surrounded by an impressive array of flaming candelabras.

This decidedly gothic affair was a welcome change after Bryn Terfel’s schmaltzy Christmas special and the Met’s frothy New Year’s gala. These are dark times. And, rather than trying to cheer us up, Radvanovsky and Becza?a chose a program that reflected all the pain and heartbreak of our troubled epoch.

But it wasn’t all doom and gloom. The concert was a resounding love letter to grand, romantic opera, packed full of high-octane, high-stakes arias and duets.

“With a program as spectacular as that, you must be more eager than ever to return to the opera house,” declared host Christine Goerke after the recital had concluded. She was right. This was a Met-sized performance, full of all the fire and passion you’d expect from the operatic stage.

It was a meaty program. But both singers had the chops for it. Neither showed any signs of wear and tear despite the taxing repertoire and, in fact, only sounded better as the recital went on.

Most importantly, every number suited the pair perfectly. Both are seasoned interpreters of the Italian high romantic repertoire and it really showed. They both know how to endow this repertoire the weight it deserves while also lending it a certain finesse, finding welcome moments of light and shade.

This was especially true of the three Verdi excerpts which started the program.

Radvanovsky’s “Pace, pace, mio Dio” was a tour de force – every phrase perfectly poised, every note impeccably shaped. Her Leonora was appropriately severe (perhaps hardened by years of hermitage) but hear-wrenchingly earnest: the messi di voce and portamenti were never overdone, delivered with a kind of matter-of-factness, well-suited to the bleakness of the subject matter.

Beczala’s “Quando le sere al placido,” by contrast, was full of hot-blooded passion and tenorial histrionics. His high register was in particularly fine form, delivering the aria’s climax with bucketloads of squillo. The softer passages were a little grainy to start with; however, as he warmed into the aria, he found a much sweeter tone, which he put to fine use in the final cadenza.

Fireworks ensued when both singers joined together in the love duet from the second act of Un ballo in maschera. Here, each singer brought out the best in the other: Radvanovsky’s proclivity for high-register pianissimo brought out a new softness in Beczl?a, while his brighter tone provided a fiery edge to her rounder, warmer sound.

The first half of the program was topped off with three excerpts from Andrea Chénier – again, splendidly delivered by both soloists. I enjoyed the steely resolve of Beczala’s “Come un bel dì di Maggio.” The tenor perfectly captured the sublime message of political optimism behind Giordano’s opera. His performance reminded me that, for all that Andrea Chénier is a tale of tyranny and injustice, it is just as concerned with the power of art to heal the soul, even in the darkest of times.

The floating high notes of Radvanovsky’s “La mamma morta” were perfectly balanced against the soprano’s grittier lower register. This is, of course, a storytelling aria, calling for a broad range of vocal colors from the interpreter: Radvanovsky pulled out all the stops, navigating the aria’s expressive twists and turns with precision and verve.

The pair crowned their Chénier segment with a gut-punching performance of the opera’s final duet. The two stars have a very subtle chemistry: it is not overly ardent or even particularly warm, but it has a slow-burning intensity and a genuine sense of musical reciprocity.

The second half of the program opened with three more verismo masterpieces. In her performance of “Sola, perduta, abbandonata” from Manon Lescaut, Radvanovsky’s gentle Puccinian lines seemed to melt into each other, lending the aria an implacable momentum despite her dirge-like tempo. Her “Io son l’umile ancella” was similarly intoxicating – its drama elegantly understated and its vocal arc shrewdly crafted.

This Polish operatic treat pitted a dense, turbulent accompaniment against a driving, upward-tending vocal line, resulting in a heart-stopping performance from both singer and accompanist.

The highlights of the concert (if it is possible to pick out highlights from such a uniformly outstanding program) were the excerpts from Rusalka which ended the concert. 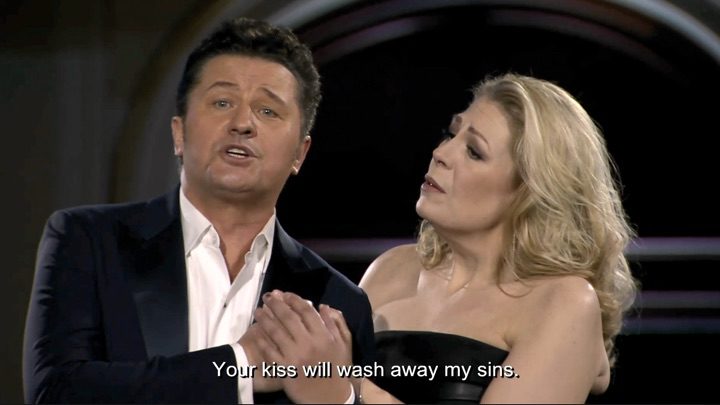 Radvanovsky delivered one of the most beautiful performances of the Song to the Moon that I have ever heard – despite spending most of the aria choked up in tears! Rich, warm, focused, tender – it was everything that you want a Rusalka to be.

Once again, Radvanovsky took the aria at a particularly leisurely tempo. But this slower pace was well-suited to her voice: not only did it give her plenty of room to blossom in the more climactic moments, but it also allowed her to show off her ability to sustain even the most delicate pianissimo seemingly indefinitely.

And, as if my heartstrings had not been tugged hard enough, the program ended with an emotionally charged performance of the opera’s final duet.

Rusalka has one of the most tortuous endings in all of opera. The eponymous heroine experiences love for the first time, but she must watch her love die in the process. It was the perfect companion to the bittersweet experience of watching these Live in HD recitals (which are at once a marvelous taste of the opera house and a painful reminder of how long it’s been since I’ve been in one!).

The duet was impeccably performed by both performers. It was as if Dvo?ak had composed every phrase specifically to show of the beauty of these two voices. I particularly enjoyed Beczala’s ghostly falsetto (which he brought out after the deadly kiss) – it perfectly matched the sumptuous tone of Radvanovsky’s soaring high register.

I have now seen all of the Met Stars Live in HD recitals – and each has been wonderful in its own unique way. But I can safely say that this recital was my favorite by a long shot.

The artistry on display was breathtaking. The performances were nuanced and thoughtful. The program was perfectly curated. Both artists were on the top of their game. And their sheer emotional commitment was mesmerizing.

So, if you need a healthy dose of emotional catharsis in this cold, miserable January, get yourself a ticket to this recital. It is almost guaranteed to have you welling up!