Take it as a high compliment to the harrowing, riveting Soldier Songs that I was grateful it lasted only one hour. My nerves couldn’t have handled more. 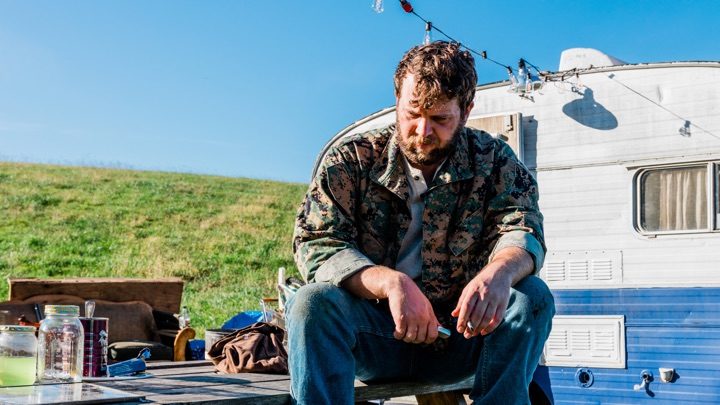 The title of composer and librettist David T. Little’s opus suggests a song cycle, and if heard in a concert context, that might be how the work comes across. Formally, it might also be a cantata. But in this brilliantly realized streaming production from Opera Philadelphia, Soldier Songs is unquestionably an opera—though one that features a sole singer-actor, the extraordinary Johnathan McCullough—with the scale, grandeur and theatricality the medium can deliver.

McCullough plays the unnamed protagonist, who appears to be in a PTSD haze. Our striking first glimpse of him a few minutes into the action almost doesn’t register as human. Wrapped in what looks like a flannel blanket, the figure might instead be bag of laundry.

It’s a gut-punch metaphor that echoes throughout Soldier Songs. Within minutes, though, he emerges as vulnerably, heartbreakingly mortal. We understand quickly that he is, in fact, mentally running through his combat from the confines of a squalid trailer where he apparently lives now, isolated in some kind of no man’s land.

“I Want to Be a Soldier” begins one narrative passage. But clearly, that experience itself is a collage, disoriented and confused. In the protagonist’s mind, toy soldiers merge with real combat, good guys with bad guys. He seems addicted to the violence of video games. What will happen if he gets shot, he wonders, concluding that he will just play the game again.

Still later, the perspective shifts again—now the soldier seems to have merged in his mind with a surviving father receiving the news of his son’s death. “Bring Me Back My Son,” pleads that parent, in one of the work’s loveliest passages, hauntingly punctuated with phrases of patriotic and anti-war songs heard in counterpoint underscoring.

Little’s Soldier Story score reflects the jumble of the protagonist’s experiences, as it moves through a gamut of styles that range from rock, to a more contemporary classical (often atonal) palette, to stretches of lyrical beauty.

Percussion plays a major role throughout, with piano anchoring the small but richly colored orchestrations. (Corrado Rovaris, Opera Philadelphia’s Music Director, is the unseen conductor here.) The vocal writing to me often evokes the twists-and-turns of Benjamin Britten, and it gives many opportunities to hear the high quality of McCulough’s rangy baritone.

But this tour-de-force performance is far more than singing. This is film acting of an extremely high caliber. That McCullough also directs here, and co-wrote the screenplay with James Darrah, is even more impressive. As with Zachary James’ visual album Call Out, which I reviewed in this space last week, I continue to be gobsmacked by the range of talents that the pandemic has revealed. (If we lived through COVID in the 1950s, would we have discovered that Birgit Nilsson was also a nascent Ingmar Bergman?)

Polymaths abound here—as I mentioned above, composer Little also wrote the libretto, which is based on interviews with combat veterans. Darrah also designed the production. The marvelous cinematography is by Phil Bradshaw.

I won’t say more about Soldier Songs, because it’s best to discover it on your own and let the power of its story unveil itself. But watching it, I remembered back to Opera Philadelphia’s first festival, in 2017, where Lembit Beecher’s I Have No More Stories to Tell You told a similar story of PTSD and its effects. A hallmark of the company has been its commitment to bringing opera to real people and events, and vice versa. That’s never been truer or more needed than it is today, and they are meeting the challenge with exceptional grace.

The Academy of Music may be dark, but Opera Philadelphia’s light of engagement in the community and beyond has never burned brighter.