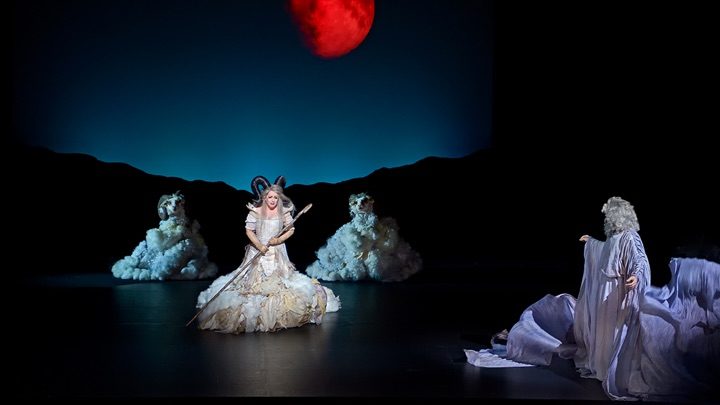 On Tuesday—the broadcast can still be watched, on medici.tv for another week, I believe—Les Arts Florissants presented one of their fanciful, supremely elegant opera productions at the Opéra-Comique, and livestreamed it to those of us who can merely dream of being in Paris. The piece was Titon et l’Aurore (Tithonus and the Dawn), a “heroic pastorale” of 1753, composed by Jean-Joseph Cassanéa de Mondonville, a highly successful sortie in the culture wars of the era of Madame de Pompadour.

Those who remember Les Arts Florissants’ triumphant Atys, Médée, The Fairy Queen and Les Indes Galantes will be charmed and diverted and thrilled by the singers, the stage effects, the band, the ballets of various species—and, especially, the marionettes. Dancing sheep! Flying sheep! Flying sheep who dance!

The score marks a tuneful transition from Rameau to the classicism of Gluck, with intriguing harmonies and active figures, rushing strings for bitter storms, curious blends of woodwinds (recorders, pipes, flutes, bassoons) for the mysterious coming of Dawn or the winsome birdsong that follows, sheep-bells and castanets to keep time, led by William Christie with the danceable snap that is his usual manner in the lighter music of this era.

The orchestras of Paris at this time were the largest and best-trained in Europe (young Mozart went nuts at their precise, incisive downbeat), and Christie gives us some idea of the shock and charm they delivered. I do not know the score and cannot say how much of the effects and touches are authentic Mondonville and what Christie may have “adjusted” for modern exacting taste. The sound is at once genuine and advanced for the era, often prefiguring Gluck’s descents into the Underworld and his celebratory dances.

The plot is the tale of the goddess of Dawn (Aurore) who falls in love with a common shepherd, Tithonus (“Titon” here). Besotted, she obtains immortality for him from the Gods—but forgets to request eternal youth as well. In the myth he becomes ever more decrepit, until she transforms him into a grasshopper, who can shed his old body and be reborn.

Interwoven with this tale is a prologue in which Prometheus steals the fire of the gods in order to bring his clay sculptures to life as a new race—human beings! But how can they make use of their new existence? For that, Love descends (in silver lame court costume) to teach them pleasure and pain. We see the results in Aurore’s affair with Titon, and its complications when Éole (Aeolus), lord of the winds, full of passion for the lady, produces a spectacular thunderstorm, raveling cloth in artistic ways and surging orchestration and dancing surges.

Éole is such a windy brute he gets nowhere with the lady, but Palès, a “pastoral” goddess (rams’ horns curl from her ears), who has rather a thing for Titon, agrees to aid his intrigue. Éole speeds up Titon’s life—he grows an enormous beard and a humped back and loses his hair, right before our eyes, and his voice grows uncertain and cracked before our very ears. Aurore is crushed, but Love returns to reverse time and reward true lovers.

To make this slight but merry tale a few sophisticated notches more enjoyable, Les Arts Florissants have entrusted the production to Basil Twist, the musical American puppeteer. If your cast (as in the Prologue) consists of a dozen lifesize terracotta sculptures who come to life and three marionette Graces dancing in mid-air, a master puppeteer is just the man you need. He can make anything dance, from cloaks to stage-high curtains, to choruses of shepherds and sheep.

Twist is also credited with the costumes, from the metallic gown of Aurora (with stars and planets floating in the air around her spiky, beamish coiffure) to the billowing capes of breezy Aeolus, three ivy-clad dryads, and the sets, which include twisting blue lights in the heavens (auroras, don’tcha know?) and an array of heavenly bodies in various hues and states of gibbous undress.

Twist is fond of having figures in black (ergo invisible) manipulating the human-size (or sheep-size) puppets in courtly dances. There are twirling projections of breaking dawn and clouding heaven. (The lighting is by Jean Kalman; the video by Daniel Brody.)

The singers are well chosen, for distinction of a sort of bell-like beauty that can quiver and strain when rage or fear distorts the sense of the song. Reinoud Van Mechelen is the importunate, faithful and jealous Titon, and his lyric tenor is capable of surprisingly high flights as well as abrupt aging. Gwendoline Blondeel, his Aurore, has a silvery tone that can turn melancholy or cheerful by dulcet turn.

The other soprano, Julie Roset, Amour, sexually effervescent and clearly anything but binary, tosses vocal filigree over everything sentient, reassuring those newly brought to life that love is worth all the bother. Mezzo Emmanuelle de Negri, as Palès, has less joyous emotions to express: amorous frustration. Even the coos of her attendant sheep do not appear to cheer her up.

Marc Mauillon does not require anything terribly lyric as the raging, jealous Éole, but his outbursts and attempts to tame them to the ear of his frustrating beloved are always vivid, his imprecations and incantations much fun. Renato Dolcini grounds the opening scene with a burly bass line as Prométhée, and his torch initiates the special effects.

There were one or two elements of this presentation that would not have been possible in 1753, but the audience of that day, I am quite sure, would have been as thrilled and as touched by the show as anyone today.