The performance of an opera, indeed, seems almost a third narrative, atop the dreamer under the scientific microscope and the larva turning into a butterfly, and the mingling is not always clear—but then, clarity never seems to be the intention. 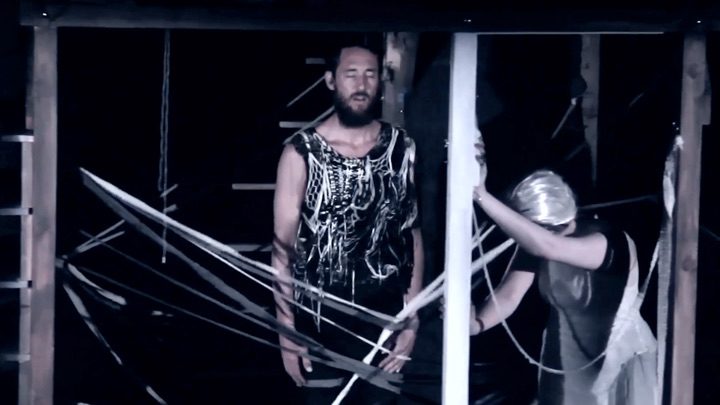 The press materials reassure: “It’s a story, it’s not a story. It has elements of story,” and I congratulate them for being on the level! Wide Slumber for Lepidopterists does not exactly combine sleep lab experiments with the life cycle of the butterfly or the moth, but it rambles through both narratives, evolution and meditation within the cocoon and sleep state/insomnia, somewhat simultaneously.

The libretto (by Canadian poet A. Rawlings, from her book) is indefinite as to narrative, and the music (by Icelandic composer Valgeir Sigurðsson) episodic, repetitive, sometimes vocal and sometimes noisy.

Credits for the piece include scenic design, prop design, animation, choreography, lighting and video, beside the director Sara Martí—a clutter of designers besides the composer and the librettist appears to be the hallmark of new opera nowadays.

Certainly the visuals of Wide Slumber are far more intricate, winning and attention-catching than the musical texture, and the sounds are so various that several attitudes towards what opera may be seem to be intruding and colliding. It is performance art with operatic aspirations.

The performance of an opera, indeed, seems almost a third narrative, atop the dreamer under the scientific microscope and the larva turning into a butterfly, and the mingling is not always clear—but then, clarity never seems to be the intention.

Drawing unexpected links between the three forms of storytelling appears to be the link, and the interweaving sets and costumes and lighting designs and films and patterns make up many more. The images toss and turn with the ruthlessness of new life bulging and bursting an old cocoon.

The intermittent music recalls Philip Glass at the point where he intersects with Stephen Sondheim, and if you have never before noticed such an intersection, that’s really quite reasonable. There are half-melodies murmured, whispered and chanted, and words that seem portentous or scientific, that begin half in the lepidopteran world but end up in the realm of a laboratory for sleep study, with a focus on the distortions of insomnia. The music contains ease and uneasiness but never assault; it tends to soothe or rhapsodize.

This hour-long spectacle—like the other two streaming operas Prototype is presenting this year—professes nothing so old-fashioned as named roles interpreted by individual performers, but there are three singers who perform in classical or folkish style.

I especially noticed an alto named Ásgerður Júníusdóttir, whose deep, thrilling, beautifully supported tones, rising at times to a full, wonderfully lyric upper register, reminded me of all three of Wagner’s Norns at once. As she was shedding lengths of cloth to emerge from a chrysalis, this was highly appropriate.