As Julia Child, Jamie Barton is clearly having the time of her life. 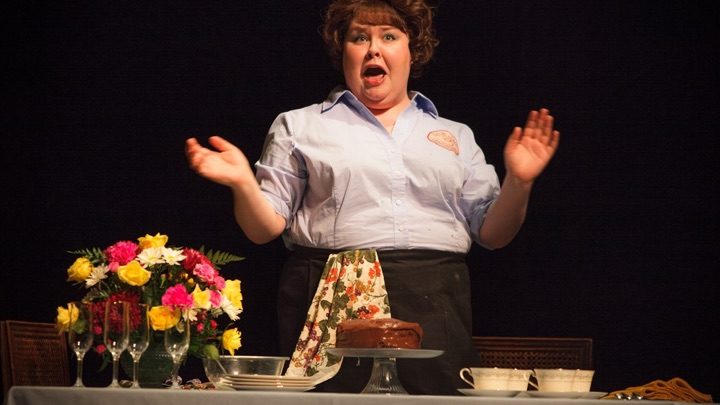 I often try to explain Philadelphia to friends from my Los Angeles life, and it isn’t easy. What they especially don’t get is the odd mix of sophisticated big city culture and friendly small town vibes. Think of it as part Judy at Carnegie Hall and part Judy singing “Howdy, Neighbor” from her tractor.

For that reason alone—though there are many more—I’m going to send them to watch Bon Appétit!, a 50-minute streaming performance that airs this week free-of-charge on Opera Philadelphia’s channel.

The core of the program is a charming, light-hearted opera monodrama by composer Lee Hoiby that pictures Julia Child in one of her famous television cooking shows, preparing a signature chocolate cake recipe. Seen here, with mezzo-soprano Jamie Barton in sensational form, it’s a delight. I’ll say more about that in a minute.

First, though, I want to point out the commentary that precedes and follows it. Starting off are comments by OP’s General Director and President David Devan; Board of Directors Chair Peter Leone; and Director of Community Outreach Veronica Chapman-Smith. These three really capture that essence of the Philadelphia I love.

On the cultural innovation side, this is a company that has risen quickly to prominence for a kind of imaginative thinking we rarely see in opera. The yearly O Festivals, which I hope will soon resume, are the real fruition of this, but even the existence of Opera Philadelphia’s very own channel (which can be watched online or through a number of TV devices, including Roku) reinforces Devan and company’s boldness.

What’s even more notable here is the heartfelt warmth in their descriptions. Chapman-Smith is particularly inspiring, as she narrates stories of OP’s community outreach—especially to Philadelphia school students—that is another hallmark of the company.

The directness, good cheer, and yes—even folksiness—that Devan and the others dispense is the balm we need now… and, frankly, stands in sharp contrast to the tenseness and fractious negotiations we’re seeing from at least one of the world’s most prominent opera companies, whose forays into streaming have had some astonishing successes, but quite a few glitches, too.

No glitches here, in a production filmed and shared by Houston Grand Opera. Both video quality and the general look of the show are flawless.

As Julia, Barton is clearly having the time of her life. The vocal demands are minimal. Hoiby wrote the piece in 1989 for Jean Stapleton, who of course was more actor than singer. But hearing Barton—in full command of her fabulous, barnstorming mezzo—is still a thrill. What’s even more compelling is her absolute ease in front of a camera. (Jonathan Easter provides the fluent, off-screen piano accompaniment.)

This is all done in direct address to the camera and includes a copious amount of actual food preparation. Julia being Julia, there is a glass of wine or three involved, too.

I doubt that the great Stapleton herself would have seemed any more comfortable than Barton, whose cheerful yet always slightly devilish personality would light up any television comedy. Make sure you stick around after the Hoiby piece ends. The credits are a hoot, which include several bloopers with Barton barely able to contain merriment.

Following that comes a final conversation, this time between Barton and Devan, the latter reinforcing the company’s social values as he describes Barton as an activist for women, queer people, and marginalized communities. Their mutual admiration and affection is palpable as they talk of possible future collaborations between OP and Barton that will actually bring her to the Academy of Music Stage. I’ll drink to that!

Bon Appétit! streams through January 15 on the Opera Philadelphia channel.