The gang’s all queer

If the original version of The Prom had zazz—to borrow from one of the show’s signature numbers— Ryan Murphy’s adaptation barely achieves fizz. 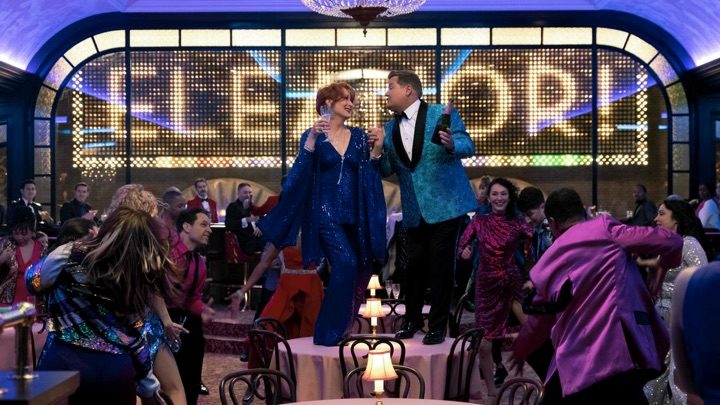 Cameron Kelsall: Ryan Murphy has essentially become the artistic director of Netflix. Flip through your landing page and you’re inevitably greeted by dozens of his projects: Ratched, The Boys in the Band, The Politician and so on. Murphy brings an unapologetically queer sensibility to everything he produces, and it’s encouraging to see a mainstream entertainment company fully embracing and promoting that. But his output is not without flaws, like his reliance on a core cadre of actors who tend to give indistinguishable performances across a variety of programs; an inconsistency of tone and tendency to leave storylines hanging in serialized dramas; and a penchant for self-aware campiness. The latter issue comes to the fore in The Prom, adapted from a 2018 Broadway musical about a lesbian teenager in the Midwest who causes a miniature culture war when she asks to take her girlfriend to the fete of the title. The musical itself—which centers on a group of washed-up hoofers who descend on the small town to preach tolerance—was charming and heartfelt, not least because it featured a cast of journeyman theater actors essentially playing heightened versions of themselves. Murphy’s treatment, starring A-listers like Meryl Streep and Nicole Kidman, is by contrast garish and overproduced. If the original version had zazz—to borrow from one of the show’s signature numbers—its adaptation barely achieves fizz.

David Fox: I have a hunch that Shonda Rhimes‘ recent Netflix deal may challenge Murphy’s rule-the-roost hegemony, but there’s certainly no question that his imprint is very dominant—at Netflix, and here in The Prom. And, as you say, not in a good way. Honestly, this is the kind of review I really dislike writing. The project itself virtually spills over with good will and positive energy. The queer-is-beautiful message is very welcome, and lends itself to the equally cheer-worthy sense that the many famous actors who appear here in roles large and small (the latter include Tracey Ullman) are endorsing that message. Again, all of this is good. But then there’s the result, which like so many recent Murphy projects looks simultaneously dumbed down and cranked up. Most of the actors do everything short of literally winking at the camera in an effort to make sure that no “in crowd” theater joke goes unnoticed. (And we’re not talking Wildean wit here, trust me.) I did not see the Broadway production, but I’d hazard to guess that it’s the kind of show that really works best in modest circumstances. That is about as far from Murphy’s wheelhouse as you can get. While I appreciated Streep’s sense of campy energy, and her look—halfway between Shirley MacLaine and Patti LuPone—is likewise fun, the overkill of the first ten minutes nearly drove me out of the room.

CK: Despite being a bona fide Broadway musical, there was something refreshingly small-scale about The Prom onstage—no doubt owing in part to the fact that it was adapted from existing source material, a rarity nowadays. (It was partially inspired by a real-life case of homophobic discrimination from 2010.) And Streep’s role was played by Beth Leavel, who, despite being a Tony winner and vocal powerhouse, is nowhere near a household name. Leavel’s Dee Dee Allen was a legend in her own mind, but when Meryl Streep gives a star performance, there’s no pretending. She is a star, and here, that kind of defeats the purpose. I’d also say the Broadway production captured both the energy of New York theater and the ethos of small-town Indiana, where the prom controversy takes place; here, Murphy’s film aesthetic, from the geographically inaccurate 45th Street of the opening scene to the anonymous suburban town that looks more like Southern California than the rust belt, is all wrong.

DF: I agree that Streep simply can’t be believed as a second-tier Broadway performer, but I basically enjoyed her more than several of the others. As for her singing, it’s not a dulcet tone, but I do think she knows how to deliver a number, and she has good pitch and a sense of rhythm (something I noticed in “The Ladies Who Lunch” trio at the Zoom Sondheim Gala.) I certainly liked Streep better than James Corden, who to me usually has two modes: preening, where he’s annoying, and maudlin, where he’s insufferable. There’s a lot of both here.

CK: I find Corden unbearable generally, but I don’t want to completely place all the blame on him here. The character he plays is written as a swishing stereotype, a neutered gay pet who speaks in showtunes. That’s how Corden plays him, and some critics have cried foul because he is straight. The question of queer minstrelsy deserves a larger, more focused conversation, but the writers should bear as much of the brunt as him for the shortcomings.

DF: Agreed, and I’ll have more to say about the deeper politics of The Prom—and Murphy’s adaptation—in a minute. But I want to go through a couple of other central performances. Kidman looks exactly right as an aging Roxie Hart wannabe, but comedy is certainly not her middle name, and her performance doesn’t really register. (Kidman’s singing over the titles of “Dream a Little Dream of Me” on HBO’s godawful The Undoing is far more impressive than what she does here.) I did like Andrew Rannells, whose genuine Broadway credentials are on view in both his excellent singing and his zingy delivery of the lines. And one cameo really delighted me! Sometimes—there’s Mary Kay Place—so quickly! But I’d also have to say that here, her sense of authenticity (now that’s a Midwesterner!) also underscored how little there was of that elsewhere.

CK: Two other performances deserve positive mention. As the leader of the PTA who spearheads the charge to cancel the prom, Kerry Washington is refreshingly unafraid to be unlikeable. It makes her ultimate change of heart seem less perfunctory. And in what I consider the standout turn, Keegan-Michael Key is warm and winning as the kindly school principal with a secret love of Broadway. He also sings surprisingly well. He’s been on Broadway already and in Hamlet at the Public—perhaps a stage musical isn’t far off.

DF: I loved, Key, too—truly adorable in every way, and also very human. A kind of modest performance and all the more charming for that. Charming is a word I’d use also about Jo Ellen Pellman, who is introduced in this movie in the starring role of Emma, a lesbian high school student who functions as the fulcrum for the plot. She sings and acts well, and I expect to hear more from her. But her presence also illuminates something to me that’s very problematic in The Prom. Pellman is physically a dead ringer for Drew Barrymore, and also has some of the latter’s very feminine emotional translucency. These are welcome qualities in themselves, and nobody is suggesting that Emma needs to be particularly butch—but Murphy and company’s notably soft take on the character seems designed for mass palatability.

CK: The costume choices for Emma look very chic—tailored jumpsuits, oversized cashmere sweaters, high-waisted gauchos—as if she had already fled to Williamsburg. I do recall the character being presented as more of a soft-butch on stage. When she put on an ugly powder-blue prom dress at the end of the first act, it looked awkward. Here, Emma’s sleeveless cocktail dress fits like a second skin. I do think there is a tendency, even when gay artists like Murphy are in the driver’s seat, to make lesbian characters more feminine and gay men more masculine on film—unless, of course, they’re meant to be entirely sexless, like Corden’s Barry Glickman.

DF: Watching The Prom, throughout I felt that for all the show’s celebration of queerness, there’s an unpleasant overtone of complacency and privilege. The lesbian couple here could not be more open-hearted and likeable. The world in which all of this takes place has a Wisteria Lane gloss. And most of all, the central conceit—that missing a prom is a traumatic life injury from which there may be no coming back—suggests a life pretty cloistered from real hardships.

CK: Having been a high school student more recently than you, I can understand how, to a 17-year-old, it might indeed be traumatic. But what troubles me is that mainstream queer art often focuses so heavily on assimilationist tendencies—let’s go to the prom, get married, have kids, move to the suburbs and find our true happiness in some facsimile of straight life. I don’t mean to dismiss hard-won freedoms like marriage equality, but at the same time, the unspoken subtext is that straight audiences can only relate to our stories if they mirror their own.

DF: I think what you call “assimilationist tendencies” is something that irks me across the board about The Prom, which wants simultaneously to be seen as giving voice to a kind of otherness, while being profoundly middle-of-the-road as a theatrical work. It feels like it checks off lots of contemporary musical theater style boxes while offering little originality. I’d certainly say that’s true about the score, which is tuneful but never memorable. I can still imagine the show having some charm and appeal in a community theater or school production. But the relentless glare of Ryan Murphy’s film is pretty unflattering.