Bel canto, from a distance

I’ll just note that Cameron and I listened separately; we didn’t compare notes; and on our own, came up with the same list of top three singers… none of whom were among the actual winners. 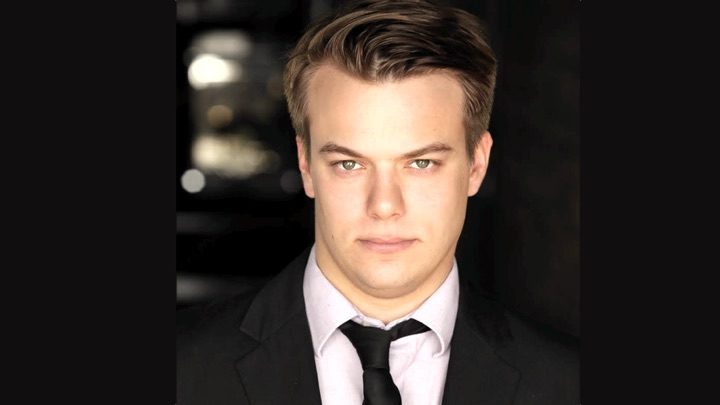 David Fox: Another year, and another reminder that cultural life is not the same, eh, Cameron? The Academy of Vocal Arts’ signature Giargiari Bel Canto competition (which focuses on opera, though not exclusively bel canto) was, of course, by necessity done virtually this time. To AVA’s credit, I thought they did an accomplished and admirably smooth job in adapting this event to video. Each of the 12 young singers had their pre-recorded moment, accompanied by Danielle Orlando at the piano, with distancing protocols clearly respected. That it was done in their home theater (the live competition is usually held in the Kimmel Center’s Perelman Theater) felt very right. I actually appreciated the sense of intimacy, and seeing the individual singers more as rising artists and less as “contestants.”

Cameron Kelsall: AVA’s Helen Corning Warden Theater is one of Philadelphia’s hidden gems, a beautiful jewel-box with elegant murals and great acoustics, where we’ve spent many lovely nights. It was nice to see it again, even if only through a television screen. It was nice, too, to see AVA taking a bigger leap into creating content for streaming. After a somewhat rocky experiment in live broadcasting last month with the Music, Give Us Hope recital—which was musically superb but technically shaky—the production quality all-around was on par with that of Opera Philadelphia, which launched its streaming channel just one day earlier. And the event served as a reintroduction to the public of many second-, third- and fourth-year resident artists who have been unwittingly silenced for months.

DF: Yet, of course, it is a competition. And this year, I felt more than ever the strange way in which those two identities—musical event and contest—are very different experiences for us as critics and audience members. There’s the concert, which to me, as always in an assemblage like this, had its peaks and valleys. But then, there’s also the question of who wins—which this year felt more perplexing than usual. Without revealing too much (you’ll need to read to the end for the details), I’ll just note that Cameron and I listened separately; we didn’t compare notes; and on our own, came up with the same list of top three singers… none of whom were among the actual winners.

CK: We could probably drum up 2,000 words alone on what critics, industry professionals and the lay audience expect from an event like this, and how those expectations differ. (For the record, this year’s official judging panel was composed of soprano and AVA alumna Angela Meade, Opera Philadelphia music director Corrado Rovaris and Seattle Opera general director Christina Scheppelmann.) We will get into that eventually, but to start, should we give our impressions of the singers and the material they chose? 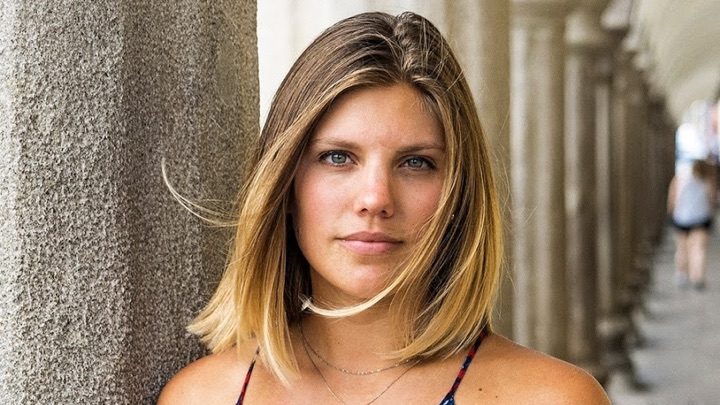 DF: Yes, let’s! The way I see it, this year’s singers break into a three different groups: the ones who won the three prizes (actually four, if we include the audience favorite award, which was given a day or two later, after tabulating the results); the three who were our picks; and the other six. How about if we consider them in those categories?

CK: Sounds like a plan. Why don’t we start with the six who would fall into the honorable mention category, since that’s the largest?

DF: That works for me. In order of appearance: Tenor Sahel Salam (“Ella mi fu rapita”) has a good instrument, but the top is precarious, and he doesn’t bind the music into a graceful line. Soprano Renée Richardson (“Depuis le jour”) has a terrific instrument, but she too doesn’t always sculpt the music into long phrases, and the top doesn’t have much float. Mezzo Pascale Spinney (“Vois sous l’archet” from Les Contes d’Hoffmann) has been an asset to AVA’s operas, but seemed off-form here, and this aria is a real dud as a competition solo. Titus Muzi (“Avant de quitter ces lieux”) shows some promise, but the lightness of his tone makes me wonder if he’ll develop into a tenor. Chelsea Laggan (“O ma lyre immortelle”) had some very good moments, but I think the long line of this aria revealed some unevenness; the voice still seems a work in progress, though certainly a promising one. Aubry Ballarò (“Come per me sereno”) has a lot of stage charm and pretty tone, but the difficulties of this aria show her limitations.

CK: I can say that we agree generally across the board, although I had a more favorable impression of Laggan’s performance—and her instrument in general. We often talk about how rarely today you hear a young singer who actually sounds like a mezzo, and to my ears, Laggan has that instantly recognizable quality. I placed her fairly high in my personal rankings, though outside the top three. Richardson also rates fairly high in terms of promise, although the repertoire she’s being guided toward seems off—to me this has the makings of a real spinto sound, not the elegantly lyric quality you want in “Depuis le jour.” Likewise, I don’t think Salam has the free, ringing tenor top that you expect in the kind of music he often sings—a noticeable problem here—though perhaps worse is his hurky-jerky recital “acting.”

DF: How about if next we consider the actual prize winners, in reverse order? Cameron, why don’t you start this time.

CK: Both the Judges’ Prize and the Audience Award went to bass Eric Delagrange, who performed Ferrando’s narrative from Il Trovatore. I confess I’ve often found Delagrange a frustrating artist, and this performance did little to change that view. The voice seems very artificially colored, and for a piece of music that requires a strong legato line, little was evident. Perhaps to make up for a lack in musical discipline, he overcompensated with an oddly contortive physical performance—it was somewhere between Igor in Young Frankenstein and an Egon Schiele drawing. Orlando didn’t help matters with her disjointed, highly percussive accompaniment, which played into Delagrange’s worst impulses. 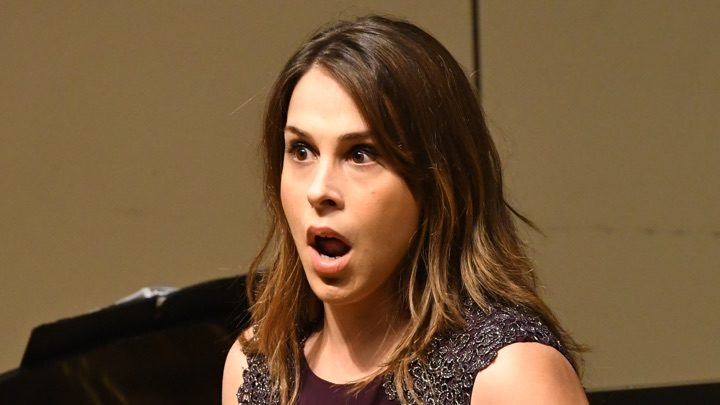 Mezzo Anne Marie Stanley: “To my mind she was the strongest of the three who placed.”

DF: Delagrange’s status as an MVP at AVA is clear from his frequent appearances in both operas and concert programs, and when he’s at his most centered, he’s a charismatic stage performer. But I agree that the challenges of this aria—which really is bel canto, with trills, grace notes, and most of all, as you say, legato—didn’t play to his strengths.

CK: The challenges of “Marietta’s Lied” also didn’t suit Kara Mulder, who came away with the grand prize. In terms of interpretation, this aria calls for a spellbinding personality, ideally someone who can marry a bewitching stillness to an absolutely graceful vocal line. In terms of presentation and affect, Mulder brings to mind the talent portion of a beauty pageant. Her voice is naturally lovely, but her performance here lacked specialness. I would venture that she, like many in the current generation of rising sopranos, learned this aria from Renée Fleming’s recording—which also means adopting many of The Beautiful Voice’s vocal mannerisms. All I’ll say is, there are things you can get away with when you sound like  Renée Fleming…

DF: Agreed across the board. Mulder does have a strong technique and a fine instrument, but the end result here was workmanlike rather than magical.  As for mezzo Anne Marie Stanley, who took the second prize, to my mind she was the strongest of the three who placed. In “O mon Fernand,” the voice was notably even over a very wide range, and she has a sense of stage presence, and quite good French. (She actually did this role at AVA, though not in the performance we saw.) But again, for me the quality of individuality and really making a personal imprint on the music wasn’t strong enough.

CK: The three singers whom we independently ranked as our top choices certainly put that personal stamp on the music they chose. To me, none was more exciting than mezzo Alice Chung—who I’ll go out on a limb and say might be the most interesting and promising resident artist I’ve found at AVA in the past decade. The voice is huge and gorgeously colored, and in performance, she’s excelled at everything from the comic Despina to the formidable Zia Principessa of Suor Angelica. Here, she sang Azucena’s “Condotta ell’era in ceppi” with an actual feel for the score’s intricacies—it is bel canto, as you said—and a riveting dramatic intensity. This is a voice that could possibly develop in so many ways, including perhaps as a zwischenfach dramatic soprano. I would be shocked if she didn’t win or place highly next year. 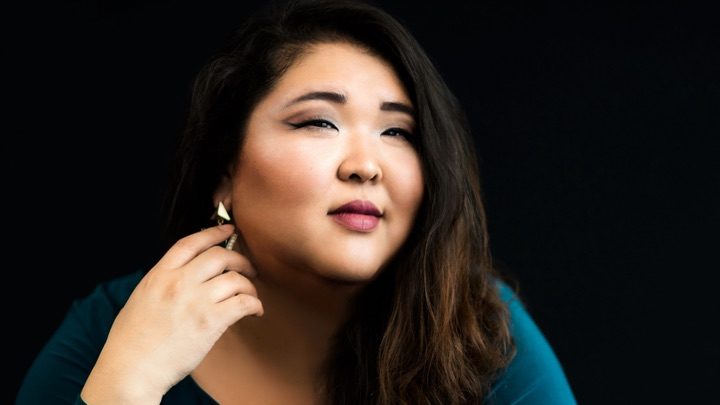 Mezzo Alice Chung “might be the most interesting and promising resident artist I’ve found at AVA in the past decade.”

DF: I could effuse at length about Chung, who as you say has been a major asset in every role she’s done at AVA. But I’ll be relatively brief, since you’ve hit the points I would be making. Here, in a long and famously outlandish melodramatic narrative, every word and emotion had specificity and punch, and the voice rings out with grandeur. I thought for sure she’d be either the first or second place winner—but competitions apart, I see a major career on the horizon. Close to her for me was Griffen Hogan Tracy. In “Il lacerato spirito,” he showed exceptional promise and musical elegance. The voice is clearly still young, but a true basso cantante, and the musical line was so natural and unforced—now this is legato!

CK: There is a sense of repose and vocal ease you often get with the best basses, and Tracy already has that. I imagine his instrument will only get stronger and more refined as the years go by. The last singer who really impressed us was baritone Daniel Gallegos, who sang the brindisi from Thomas’ Hamlet. Gallegos has the kind of velvety timbre any baritone would kill for—you can see him being equally successful in bel canto and Verdi—and a strong florid technique.

DF: He was very much on my short list last year, with a haunting performance of “Questo amor, vergogna mia” from Puccini’s Edgar, which I also think is a real kick-ass competition solo: largely unfamiliar, beautiful, and very memorable. Actually, I thought that suited him better than that Hamlet aria, but in both as you say, the velvety texture of the voice is exceptional. We’ve both talked here about specialness and individuality—it may seem to be asking a lot of a student, but we all know that those are the singers who become stars. And my money is on Gallegos, whose sound is personal and blue-chip.

CK: Gallegos is in his fourth year at AVA, meaning this was his last shot at winning Giargiari. It’s a shame he wasn’t among the top performers—he deserved it. But sometimes our favorites don’t make the cut. The competition has endured for over 40 years and will be back in 2021—whether in person or virtual remains to be seen. But it will be intriguing to see who returns to compete, what music they choose, and what kind of development will occur between now and then.

DF: I’m so looking forward to disagreeing with the judges again next year!