Music, give us hope

It was hard for me not to get choked up, watching two of AVA's most promising young graduates having to make this opportunity for themselves, and doing it with such palpable good humor. 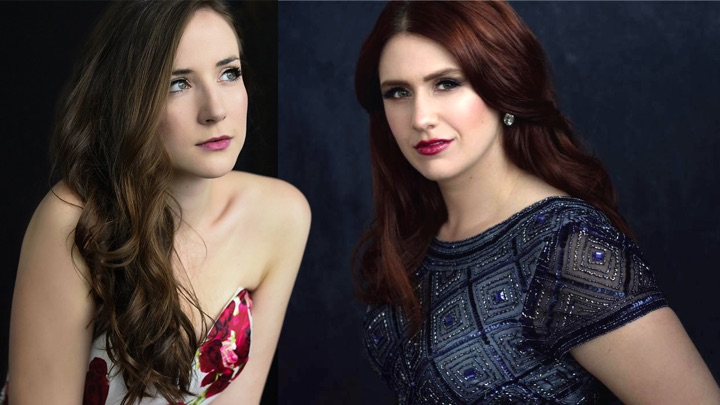 Cameron Kelsall: The last live opera performance I saw BC (before Coronavirus) was La Favorite at the Academy of Vocal Arts, which I’ve long said is one of the great gifts to music lovers living in Philadelphia. Having proximity to a world-class training ground allows local audiences to discover young singers at the very beginning of their development and follow them as they forge their professional careers. (In the last two decades, AVA alums have included the likes of Joyce DiDonato, Michael Fabiano, Angela Meade, Ailyn Perez, Bryan Hymel and Joyce El-Khoury, to name just a few.) Two recent graduates—mezzo Hannah Ludwig and soprano Alexandra Nowakowski—have unfortunately seen their upward trajectories momentarily stifled by the Covid-19 pandemic and the subsequent pause on live performances that followed. For that reason alone, it was moving to watch them make music together, along with accompanist Jose Melendez, in a live-streamed recital poignantly titled “Music, Give Us Hope”. The hour-long event was full of personality, plus a few technical glitches—it was streamed through an iPhone in landscape mode—but it did indeed give me hope that I’d be hearing even more from these voices in the future.

David Fox: Cameron, you touched on the sense of personality, which throughout the New World of Zoom performances from people’s homes has been for me the biggest point of interest. Ideally, there can be something truly genuine and sweet about it, and this recital—which, I should say from the start, I also found highly rewarding musically—had that sincerity factor in a big way. It was hard for me not to get choked up, watching two of AVA’s most promising young graduates—who were well on their way to significant careers here and abroad—having to make this opportunity for themselves, and doing it with such palpable good humor. It was also wonderful to see again, even at a distance, AVA’s beautiful Helen Corning Warden theater, where you and I (often together) have seen so many operas and concerts. It’s only a few blocks from my apartment, but of course in today’s terms, that doesn’t mean accessible. Yet “accessible” is exactly the word I’d use to describe the concert itself, which for me was a touching blend of optimism and reality; with two singers who in one sense are already sophisticated professionals, and in another, young people struggling with forging a career in an uncertain time.

CK: The theme of accessibility touches on several important points. Not much good has come from the pandemic in my humble opinion, but one positive byproduct of the pivot to streaming live performances is the increased reach it allows. With something like opera, long branded as elitist and out of touch, that could actually provide a turning point for how the entire art form is perceived. On a related but different note, the program—devised by Nowakowski and Ludwig themselves—was accessible in the best possible ways, offering a cross-section of recognizable standards and classic arias, alongside interesting art songs and lieder. There was something for everyone, from the novice to the die-hard, and it was all delivered at a relatively high level.

DF: Yes, like some of the best efforts of the Met to offer from-home performances through technology, Nowakowski and Ludwig found an appealing mix of material, each piece of which clearly meant something special to them, and that came through. Nowakowski began the recital with “Over the Rainbow,” which certainly emphasized the theme of yearning for something better, while still enforcing a sense of positivity. I’m generally resistant to this as a piece for an opera singer, but she delivered it with simplicity and grace. It certainly showed off her mid-range, which is unusually substantial for a lyric coloratura, and she nailed the final phrase in a single breath with a superbly managed, soft high note. If either of the singers was nervous, it didn’t come through at all—they seemed the last word in naturalness.

CK: “Over the Rainbow” is overdone under normal circumstances, and I fear it will be even more prevalent in the future, but Nowakowski’s delivery was the first I warmed to in a while. You basically said this already, but I want to reiterate how pleasing it was to hear her employ surprisingly supple chest tones, not to mention bell-clear phrasing and a real way with the text. She could be a cabaret singer par excellence.

DF: Agreed, I just want to throw in that her suppleness and wit was also a hallmark of the Zerbinetta she sang as an AVA student, which I found at least as good as some very famous exponents of the role.

CK: Ludwig, too, dipped into the musical theater idiom with “Climb Ev’ry Mountain”—another showpiece that can seem tired and familiar, but which here also took on extra resonance. Yet both singers also excelled in opera, with the highlight for me being a reprise of Lakme’s Flower Duet that the pair sang for a graduation recital two years ago. As then, their voices melded beautifully, with a rich, dark lower line from Ludwig and sweet, high singing (and great staccati) from Nowakowski. There was a moment of visual dissonance as the two women sang separated by a plexiglass divider—welcome to 2020!—but it was also one of those spiritually uplifting instances where the beauty of the moment allowed you to briefly forget the weirdness right in front of you.

DF: The Lakme duet was a highlight for me, too—a familiar piece that felt fresh through the obvious camaraderie of these two. To take nothing away from the exceptionally polished Nowakowski, since first hearing Ludwig, I’ve been a total fanboy. It’s a voice of a kind one rarely hears today, especially in a young artist—a true mezzo with substantial weight and color in the low range, but also a quite brilliant top register. There’s a plushness that’s almost golden age in her sound, and I also love the slight flicker vibrato. One of her solos here is the “Villanelle” from Les Nuits d’Été, and here she reminded me of Nan Merriman, which is about as high praise as I can give.

CK: Ludwig opened the program with “An die Musik”—in excellent German—and I agree that it’s a rare sound, and one that deserves to be heard across a wide range of repertoire. She was also wonderfully easy-going in her remarks between numbers, showing a lot of unforced humor that made me wish the program included a comic song or two.

DF: I thought Nowakowski also radiated charm and good humor. I loved her comment before singing (very well!) “O mio babbino caro,” that it’s become the operatic anthem for five-year-old sopranos; and also warning us before she and Ludwig sang, with sumptuous richness, a portion of the final duet from L’incoronazione di Poppea that this would not be a performance for Baroque purists! Point taken, but it was certainly gorgeous on its own terms.

CK: This year is all about taking things on their own terms, isn’t it? But even under the most extreme circumstances, I can think of few other ways I would have wanted to pass an hour last week. And luckily, the recital remains available indefinitely on YouTube, generously provided free of charge by the artists. (If you’re so inclined, donations can be made at through Venmo @artforeveryone and PayPal). Listen to Ludwig and Nowakowski now, in the comfort of your homes, and rest assured you’ll be hearing them on grander stages somewhere over the rainbow.