A couple of misfits

Diana Damrau and Joseph Calleja presented an uneven program in a lavish setting this weekend in the most recent entry in the Met’s concert series. 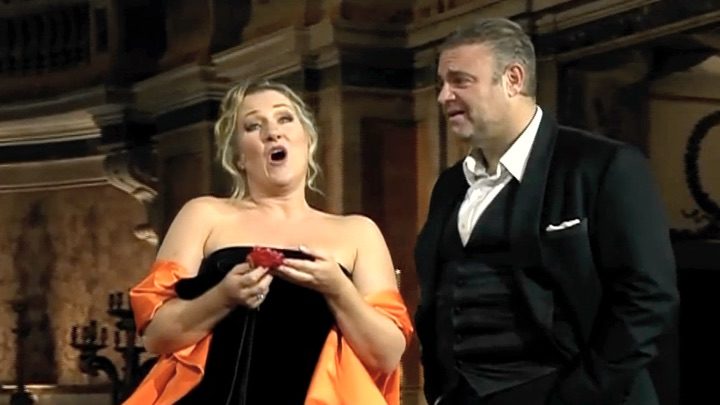 Vocally, these two are not a match made in opera heaven. Damrau’s light tone, which ranges from a chirpy innocence to crystalline splendor, did not fit with Calleja’s brash, brawny tenor.

Maestro Roberto Moreschi, with his sensitive and sparkling accompaniment, had a big job to do, and performed admirably by smoothing over the worst of the mismatch in his singers and filling the cavernous Palatine Chapel.

Damrau’s choice –nervously hailed by both Angel Blue and Peter Gelb as “courageous”— to sing all new repertoire produced mixed results. As Gelb put it: “I don’t know if Diana will ever sing Tosca on the Met stage.” Me neither, Mr. Gelb. While she sang it beautifully, it felt both vocally and physically wrong to me, leaning so far into Tosca’s innocence and flightiness that it lifted the character off the ground, losing the toughness and inner strength that makes her able to fight off Scarpia, and the deep compassion that provokes her to lay out the candles around his body.

The Met’s choice to play excerpts of the singers in favorite roles during the breaks is a double-edged one. Sometimes it gives a fascinating look at the growth of singers over the years. In this case, the selection of Damrau sing “Addio del passato” in a 2018 performance only served to show us how much better suited she is for that role, which brings out a maturity and weariness that perfectly balances all the heady bubbliness of her voice.

Calleja fared much better as Cavaradossi, who he played as half-loving, half-distracted, and totally self-involved (so, perfectly). His “E lucevan le stelle” was a bit loud for my taste, but he approached the aria, particularly the final notes, with exceptional bravura and strength.

The Donizetti was equally strange, and suited neither of them very well. Calleja is simply not convincing as Nemorino. Nemorino is kind of a dweeb. Calleja looks and sounds more like the football star who would be giving Nemorino a wedgie. It didn’t work for me vocally with Calleja struggling to move his voice through the coloratura. Ms. Damrau was similarly not quite right for Adina; her voice is too kindly and laden with pathos. I am a huge fan of hers, generally, in part because she radiates sincerity, both in voice and in person. She can do evil, and she can do ingenue, but flirty and flighty doesn’t quite work on her, at least not for me.

Their physical chemistry was equally mismatched, an awkwardness which was put to good use in the Micaëla/Don Jose duet, where Damrau was perfect as the girl next door that your mother unsubtly hints would be good for you who you think is kind of annoying. Vocally, this was also a favorite, with Calleja easing off the throttle and serving some sensitive phrasing. Calleja’s “La fleur que tu m’avais jetée” was his finest piece on the program, funneling his giant voice into a focused beam of sound, imbuing it with beautiful sensitivity, control, and ending on a glorious decrescendo. Calleja looked relaxed and handsome in the role, perfectly embodying Don Jose, a man whose powerful physicality and confidence make his obsession with Carmen into a ticking time bomb, waiting to blow when she dumps him.

The last section of the program suited both singers better, with Damrau’s perfect execution of the Czárdas from Kalmán’s Gräfen Mariza, which brought out the darker palette in her voice and showed off her seductive side in a convincing way (She looked awesome throughout, with a rotating cast of colorful boleros over her black velvet gown). Calleja’s “Granada” was equally sexy and fun.

The two ended the show with a swift turn into pure cheese, singing “Non ti scordar di me” by Ernesto de Curtis, famous for his “Torna a Surriento” often heard in souvenir music boxes and in Italian restaurants. I found it exceedingly delightful in its sappy goofiness, with Damrau providing little improvised “ahs” while she and Calleja slow-danced. Awwww. Cute.

The last number was a bit of a letdown, with a duet of the Gounod “Ave Maria,” famous for being at every Catholic wedding or funeral I’ve ever been to, (let us know in the comments which “Ave Maria” reigns supreme-I like the Schubert because I am basic). It was slow, very, very sincere and brought the mood down to positively soporific. They should have ended on the de Curtis.