HERE’s Zoom opera, all decisions will be made by consensus, is not merely an opera written to be performed on a digital platform, but an opera that critiques the platform itself, laying bare all its social and aesthetic limitations. 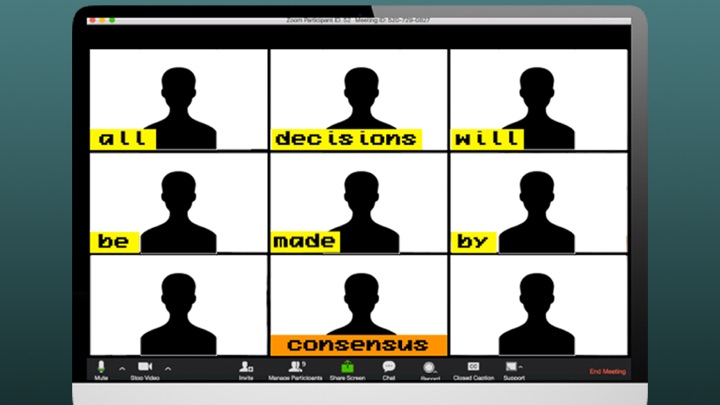 As most opera companies are scrambling to stream old performances during the quarantine period, HERE Arts Center in New York has, in record time, put together the world’s first Zoom opera. And it is brilliant.

If you, like me, have suddenly found your entire life transferred onto Zoom, you will no doubt be familiar with all its strengths and weaknesses. However, if you are lucky enough to have been spared this seemingly inescapable technology, all you need to know is that Zoom is an online teleconferencing platform—like Skype, but slightly more accommodating of large organizations.

In a Zoom meeting, you can participate via audio and/or video, type into a chat bar, share content off your computer, and even give yourself a green-screen-style backdrop. In the midst of the Coronavirus lockdown, it is being used by businesses, schools and universities, community organizations, and social groups all over the globe to remain connected.

HERE’s Zoom opera, all decisions will be made by consensus, is not merely an opera written to be performed on a digital platform, but an opera that critiques the platform itself, laying bare all its social and aesthetic limitations.

The opera’s creators, composer Kamala Sankaram, librettist Rob Handel and  director Kristin Marting, brand their work an “operatic experiment”. However, it felt like it was not so much the operatic artform that was the subject of this experiment, but Zoom itself. Indeed, it was as if Sankaram and Handel were using opera (and all its musico-dramatic conventions) to probe the aesthetic limits of this now-ubiquitous platform.

all decisions does not have a plot per se, at least not in the narrative sense of the term—rather, it presents a single digital vignette, a fleeting glimpse into some fictitious, musicalized Zoom meeting. The performers, all simply sitting at their computer screens, play a rag-tag group of activists attempting (unsuccessfully) to organize a protest over Zoom; they drop in and out of the Zoom session, talking over each other, occasionally left on their own to muse. The entire experience lasts barely 15 minutes.

Sankaram’s score is bright, chic, vibrant—seamlessly vacillating between a cool post-minimalism and back-beat electronica. The composer has become a formidable figure in new opera, her prolific output marked by a chameleonic style and fearless dramatic sensibility. all decisions showcased her ear for complex rhythmic layering and impeccable musico-dramatic pacing. Throughout the score, moments of pulse and stasis were effectively balanced against strident aleatoric interjections—all set to a stylish electronic backing track.

The tone fluctuated between the mundane and the surreal. Banal chatter—familiar to anyone who has ever held a meeting over Zoom—occupied much of the opera’s duration: the secretary informed the other characters that she is taking minutes; the meeting’s chair (the velvet-voiced Paul An—a vocal and dramatic standout) shouted “Daddy’s working” to a child off camera (who later made a surprising cameo appearance); and a particularly chatty participant (Sankaram herself, an impressive performer in her own right), realizing she is talking over someone, leaned into the camera to leer “Oh sorry, you go!” ad nauseum.

All the characters seemed to be at crossed purposes, veering so wildly off topic that it was impossible to know what they were meant to be protesting in the first place. One character (played with zest by Hai-Ting Chinn), wearing cat fluffy ears, spent much of the opera describing the plot of a sci-fi movie which she couldn’t recall the name of (at the end of the opera she finally remembered: “Doomsday Machine– the movie’s called Doomsday Machine”).

A right-wing agitator (Adrian Rosas, decked out in a green beret) spoke conspiratorially about a “redneck revolt”, claiming to have access to firearms (at the end of the meeting he stood up, inadvertently revealing that he was not wearing pants).

A veteran protester (venerable avant-garde vocalist Joan La Barbara) rolled her eyes at the younger activists (“I was levitating the Pentagon from before you were born”), while another participant (Zachary James, with ineffable comedic timing) regaled the group with inane digressions about ikebana flower arrangements and Nordic LARPing.

For the most part, the characters sang these banalities all at once, creating a rich, multi-layered cacophony as they compete for their slice of the sonic bandwidth. This intricate polyphony gave the opera an intoxicating energy, a sense of drive that undercut the relative stasis of the dramatic action.

However, it was the softer sections of the work which were the most striking. At one point, the meeting chair led a group meditation as everyone’s background changed to the aurora borealis—we were left with only a faint ticking noise, a whimsical moment of serenity in amongst the chaos.

At another point, all other participants disappeared, leaving La Barbara’s character alone onscreen. In an extended monologue—half-spoken, half-sung—she outlined an emergency procedure (presumably intended for her children) to be put into place if she goes missing after the protest. Her tone was warm, calm, heartfelt, with a note of melancholy, perfectly underscored by the gentle swell of Sankaram’s harmonies.

And it packed a surprising emotional punch: the jarring earnestness of La Barbara’s performance, a stark contrast to the madcap hubbub of the rest of the opera, provided a welcome touch of humanity. It is a testament to La Barbara’s skill as a performer that she was able to communicate such emotional weight through all the distortion of the digital platform.

Indeed, for all its zany, caustic humor, all decisions is a relatively serious commentary on the politics and ethics of technological mediation, asking how the technologies we use to stay connected function to restrict or stifle political or social activity.

The opera’s characters find themselves unable to forge emotional connections, unable to coordinate a coherent political strategy; instead, they are almost entirely preoccupied with negotiating the technology purportedly designed to help them. The opera seems to ask if these technologies, which have been cast as our saving grace in these exigent times, can really be asked to meet all our needs in this time of extreme isolation. It questions whether the internet alone is capacious enough and flexible enough to bear all the richness and complexity of our political, social, and aesthetic exchanges.

In the performances I saw, Zoom itself provided its own answer to these questions. I watched the opera twice—on their Facebook livestream on Friday and via Zoom on Saturday. During the Friday performance, one of the singers froze during her solo (separate from the carefully engineered freezes elsewhere in the opera), leaving an unplanned gap in the performance. The fictional disruptions dramatized in the opera thus became real-life obstacles to the performance itself.

While I am loath to pass comment about singing on a platform as notorious for its poor sound quality as Zoom, all the performances were delightful. This motley cast of singers, who might have sounded ill-matched in the opera house, formed a heterogenous soundscape over Zoom’s heavily compressed audio. La Barbara’s earthy straight-tone blended well with James’ more speaky sound, while the brighter voices of Chinn and Sankaram were the ideal counterparts to the richer voices of Rosas and An.

The two performances I viewed were radically different; improvisation was built into the score itself, an effective means of combating Zoom’s notorious sonic lag. Characters developed in different ways, emotional trajectories changed, and vocal lines coalesced into new textures. Even the electronic backing track (apparently operated live by Sankaram herself) sketched out new temporal parameters for the work with each performance.

Ultimately, in proving that they could make an opera over Zoom, the work’s creators showed that live opera is at once too immense and too intricate to be contained on any digital platform. Doing so not only provided delightful entertainment in these trying times, but offered a tantalizing glimpse of the live operatic experiences we can look forward to when this lockdown is over.