As long as women have been preyed upon, Don Giovanni has been relevant. 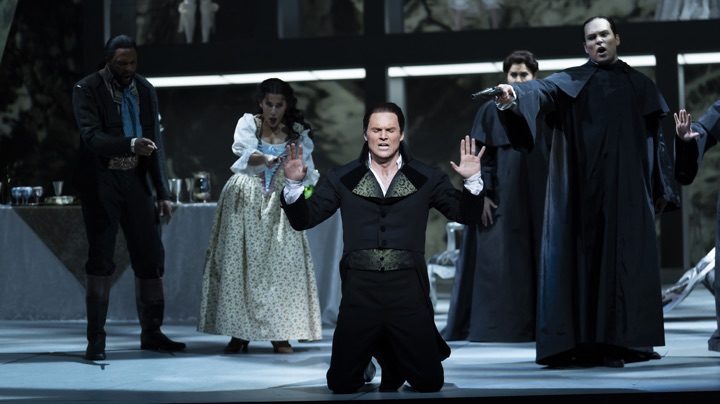 At the end of Washington National Opera’s new Don Giovanni, after the sextet or protagonists has hinted at what might lie ahead, Donne Anna and Elvira and Zerlina link hands upstage to form a final tableau. It’s an evocative image, like Botticelli’s enigmatic Three Graces from Primavera, and it looks significant, but does it have much new to say about Don Giovanni? Not really.

As long as women have been preyed upon, Don Giovanni has been relevant. But in 2020, as society has started to consider the intersectional component of oppression and privilege, the point Don Giovanni seems to most acutely make is that if we’re going to make any sort of steps towards equality (or calling out what colors our lived experiences differently), we have to do it as a team.

Mozart and Da Ponte gave us a screwball comedy ensemble of characters from various walks of life to demonstrate this idea and then upped the ante by making the dynamics within that group (and between that group and Don Giovanni) even more complex.

However, this new staging by E. Loren Meeker only engages sporadically with the parts of Don Giovanni that resonate in 2020 versus those that resonated in 1975 in which a trio of women, seemingly at different stages of similar lives, pursue a villain to his ends.

For a piece that played to an opening night audience that included Justices Ginsburg and Kagan, I would have preferred a little bit more to chew on, especially when much of what remained was mostly chemistry-free, space-filler blocking between the principals unfolding without consistent sense of pacing to the music. 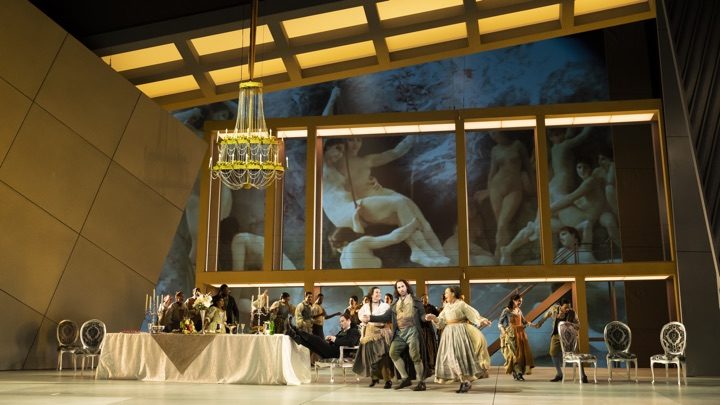 It didn’t help that the staging stood somewhat at odds with its design aesthetic, the whole company inexplicably clothed in costumes originally designed by Jean-Pierre Ponnelle and the opera unfolding amidst white walls, ramps, and scaffolds (also being used by WNO’s production of Samson et Dalila, by Erhard Rom) that only vaguely suggested the opera’s myriad locations.

For a piece in which the nuanced spatial dimensions are as important to the progression of the plot as the unique constructions of hell, purgatory, and heaven are to the Divine Comedy, the dueling and unspecific aesthetics of the production’s design seemed to blur or overcomplicate relationships that are fairly clear to begin with. S. Katy Tucker’s expressionistic and scribbling projections emphasized that muddling point.

If the production was hobbled by its own duality, Ryan McKinny in the title role seemed diminished by the sameness of his take on the role. His intense, forthright delivery of a vocal line characterized by a blunt and incisive handling of text has made him a go-to for 20th-century roles (especially by John Adams).

However, in Mozart, his compact bass-baritone doesn’t bloom, much less streamline into the sort of the dreamy phrasing that draws a distinction between cruel master and suave seducer throughout the opera. Happily, though, Kyle Kettelsen delivered that in spades as Leporello, his comic timing understated and his singing smooth and sinuous. The catalog aria, in particular, stinted on neither lilt nor verve.

But outclassing them all was Vanessa Vasquez as Donna Anna, wielding a healthy, shaded soprano that bursts forth with tang. Both dramatically expressive and technically deft, her Donna Anna confirmed to me what I suspected after hearing her Mimì last year: Vasquez is one of the most original, exciting artists working in the lyric-soprano repertoire today. She tossed off each of her arias with simplicity and pathos, “Non mi dir” emerging as note-perfect as I’ve heard it.

If Alek Shrader as Don Ottavio was intimidated by her, it might explain the disconcertingly croaky performance from an artist I have long admired. With his voice lacking any clarion quality and sounding unusually constrained, it came as a relief that “Dalla sua pace” was the only aria afforded to Ottavio in this production that still clocked in about 3 1/4 hours. And while Evan Rogister’s tempi never felt oppressively slow, the conducting was wanting in litheness and transparency from the orchestral playing throughout.

The rest of the cast fared well, most notably Norman Garrett’s energetic Masetto and Vanessa Becerra’s delicately sung Zerlina. Keri Alkema has found a more congenial role in Donna Elvira than in last-season’s Tosca, easing her somewhat generic though dramatically punchy soprano in until she unleashed fire in the second act’s “Mi tradì.”

WNO’s Don Giovanni runs in repertoire through March 22 with Samson, another opera about how hellfire can singe period hairdos. May it bring the house down in more ways than one.