Not everyone is happy about the Beethoven sestercentennial. 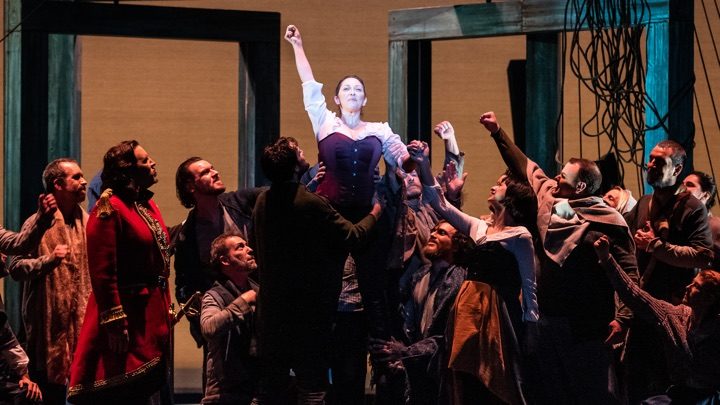 This is a big year for Beethoven. Musical institutions of all stripes have hastened to commemorate the 250th anniversary of the composer’s birth. Over the course of this year there will have been full cycles of the composer’s symphonies, his string quartets, piano trios, and piano sonatas, along with symposiums, festivals and a host of other Beethoven-themed events.

And, on Wednesday night, there was Opera Lafayette’s second New York performance of the 1805 version of Beethoven’s Leonore, which I will return to shortly.

Not everyone is happy about the Beethoven sestercentennial. Many pundits have called for a complete Beethoven boycott for the duration of the anniversary year – first on twitter, and then in an article in the Chicago Tribune.

It is not Beethoven himself that these boycotters object to, but, rather, what Beethoven has come to stand for.

Beethoven has become the quintessential “Great Man”, a towering emblem of musical genius. His works, we are often told, are consummate “masterpieces”, their prodigy seemingly transcending the limits of human talent. No other composer (bar, perhaps, Mozart) has been subject to so much mythologizing, aggrandizing, and hero worship.

Yet, a new generation of concert-goers have come to interrogate this towering legacy, challenging Beethoven’s ubiquitous presence on our concert programs. Many have observed that the notions of “greatness” or “genius” or “masterpiece” are social constructs, and, therefore, subject to longstanding social biases. 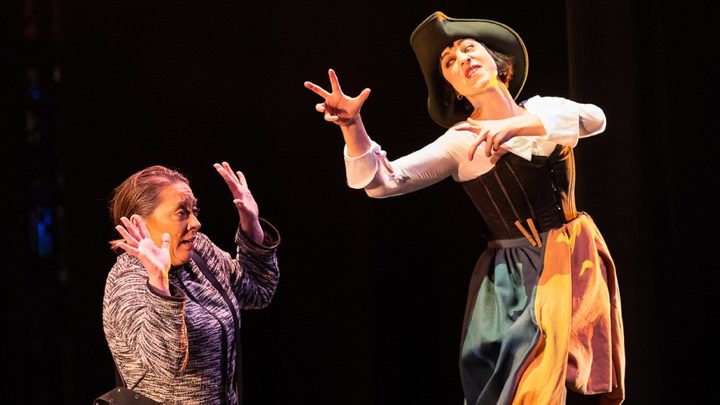 The so-called “Great” composers of the musical canon are almost always white and almost always men. Consequently, the music we consider to be “masterpieces” is bound up in systems of patriarchy and racial hegemony, rather than in any objective metric of musical “greatness”.

Beethoven has become, to some extent, a victim of his own success. For many people, he has come to stand in for all that is wrong with classical music programming in the 21st century, a political cipher emblematic of a wider social problem.

Indeed, Beethoven was no transcendent genius. He was a working composer, a businessman trying to make ends meet in turbulent times, his skill set no more exceptional than other working composers of his time (like, say, Rossini or Reicha).

His compositions, his musical language, were not the result of some exceptional stroke of inspiration, but were the product of social and economic conditions beyond Beethoven’s control. His pieces were not “masterworks” but commodities circulating in Vienna’s complex, politically contingent cultural economy.

And yet, it seems to me that, in exclusively boycotting Beethoven, we continue to treat him as a legendary or exceptional figure. We continue to pave over this workaday history in order to present him as an incomparable, monolithic figure. Boycotting him, bringing him to the center of today’s musical debates, only serves to bolster the hazy mythologies which surround his legacy.

Rather, it seems to me that the best way to counter narratives of Beethoven’s “greatness” is by emphasizing his life as a working musician, painting him not as genius, but as laborer – we might even say, a musical entrepreneur – composing within a distinct economic context. 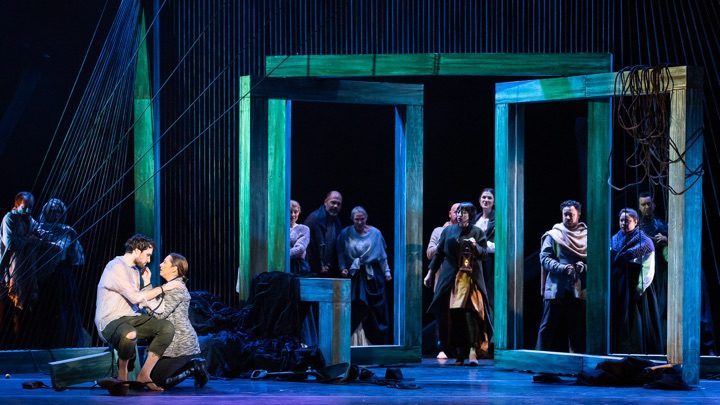 Which brings me to Opera Lafayette’s “Leonore Project”, a three-year undertaking aiming to “recapture the origins of this touchstone of the operatic canon”, which culminated in their production of the 1805 Leonore this month. It seems to me that, through this project, Opera Lafayette has found a perfect way of dealing with Beethoven’s legacy, situating the composer within his cultural milieu while also reclaiming him for the 21stcentury.

Nothing else in Beethoven’s corpus emphasizes the quotidian labor of composition than his work for Vienna’s Singspiel theaters. These works exist mostly in scattered fragments: there are a handful of made-to-order numbers written individually for Singspiele by other composers, and sketches for an abandoned collaboration with Schikaneder – the piecemeal products of a working musician’s banal and irregular slog.

Leonore/Fidelio emerged from the failed collaboration with Schikaneder, but its libretto was more or less pilfered from Gaveaux’s 1797 opéra-comique, Léonore, ou l’Amour conjugal (which Opera Lafayette performed in 2017 to kick off their “Leonore Project” – a DVD is available).

It was begun out of economic necessity (the Theater an der Wien provided Beethoven with a residency), but its success was mired by a number of exigent factors, namely the Napoleonic occupation of Vienna and a lack of suitable singers.

What was supposed to be Beethoven’s breakout operatic triumph dissolved into a decade-long process of musical and dramatic revision: first there was the three-act 1805 version, then, the two-act 1806 version, and, of course, the 1814 version commonly performed today – each subsequent version contained revisions by a different librettist.

All three versions – the first two known as Leonore and the last known as Fidelio – are jumbled together under the same opus number, collectively a testament to the chaotic conditions of its production.

On Wednesday night, Opera Lafayette’s performance of the 1805 Leonore demonstrated that Beethoven’s Singspiel remains so important precisely because it exists in so many imperfect, fractured forms. Through their “Leonore Project”, Opera Lafayette seems to resist the narrative that Beethoven’s works were perfectly formed, transcendent, self-contained masterpieces by presenting this Singspiel as messy, disunified, historically contingent, and, ultimately, in dialogue with the operatic conventions of its time.

This was partially achieved through Opera Lafayette’s deluxe, detailed program booklet. More high-end than your standard playbill, this booklet carefully laid out this complex history of this work through a series of brief essays, situating the 1805 Leonore between Gaveaux’s opéra-comique and the canonical 1814 Fidelio.

The booklet also included the sheet music and editorial notes for Will Crutchfield’s new reconstruction of Florestan’s long-lost aria (recently featured in a New York Times article), which was created especially for Opera Lafayette’s production.

However, while the booklet offered countless musical and historical insights, it was the performance itself that offered the most visionary rethinking of Beethoven and his legacy. Conductor Ryan Brown’s lean, no-nonsense take on Beethoven’s score eschewed ponderous reverence in favor of a raw immediacy which made this centuries-old opera sound almost brand new.

From Opera Lafayette’s period orchestra, Brown conjured a formidable sound world, powerful without being forced, and granular without being coarse or rough. This was Beethoven at its grittiest: Brown, forgoing romantic blend, presented Beethoven’s orchestration warts and all, the violins leaning right into the strings, the horns blaring cuivré, and the woodwinds bringing their colors to the fore.

As a result, quicksilver changes in texture and dynamics were accentuated: every crescendo, every change in orchestration became a thrilling micro-event, equipped with an enticing sting in its tail. Through these sharp-edged gestures, Brown made it abundantly clear that this was not your Grandmother’s Beethoven: from the overture (“Leonore II”, the first of four that Beethoven would write), there was a delightful sense of spontaneity – even danger – bolstered by Brown’s brisk, unfussy tempi.

Indeed, after so many half-baked Eroicas and under-cooked Egmonts, the experience of hearing Brown’s revelatory interpretation was not dissimilar to that of the prisoners in Beethoven’s opera, who step out into the fresh air and proclaim “O, welche Lust!”.

The production, too, foregrounded immediate emotional impact over interpretive fuss. The action was bare, earnest, unburdened by excess choreography, playing against an austere, Noguchi-esque set. And it was utterly enthralling.

The effect was often very moving: Leonore’s reunion with Florestan, for example, was captured with a heart-warming simplicity, while the grim irony of Leonore digging Florestan’s grave was genuinely harrowing. Even the opera’s moralizing finale, often so ham-fisted in its tone, was staged with such sincerity that it was, at times, almost tear jerking.

This no-frills production stripped Leonore of all its hifalutin Romanticism, and the opera was all the better for it. Indeed, this direct, unpretentious approach proved the perfect dramatic counterpart to Brown’s conducting.

Occasionally, the comic moments fell a tad flat, played with the same clear-eyed veracity as the more dramatic moments. Sudden, jarring changes in tone are part and parcel with these so-called “rescue operas”, which, for the most part, emerged from primarily comic genres. Tomas’ production seemed cautious to lean into these shifts in tone, preferring to draw out lines of consistency and continuity between numbers.

The cast seemed very at home in this dramatic style. The dialogue was delivered with clarity and intention without ever feeling stiff or declamatory, and the shifts between speech and song were adroitly managed (Opera Lafayette, well accustomed to French opéras-comiques, has this more down pat than most major opera houses).

The main event of the evening, the newly reconstructed aria for Florestan, was given an impassioned performance by tenor Jean-Michel Richer. His full-throated Florestan was deliciously defiant, hardly worn down by months of imprisonment and starvation.

This was afforded, in part, by Richer’s rich, hearty middle register and forceful, rugged low register, which helped to turbo-charge the third act’s many ensembles. Yet all this vocal fire never felt one-dimensional or overblown, Richer finding plenty of levity and nuance in the act’s moments of lyricism.

Nathalie Paulin’s slow-burning Leonore began rather gently, Paulin presumably pacing herself through the lighter material of the first act. It was not until her second-act aria that Paulin’s Leonore truly bloomed, revealing a warm, spry voice, strongest and most flexible in its middle register. In the third act, Paulin proved more than capable of matching Richer’s power, although the high Bs in their duet were often a tad harsh and might have benefitted from a gentler approach.

Down-to-earth and unsentimental, Paulin’s Leonore was the perfect counterpart to Richer’s fervent Florestan, exhibiting a resolute stoicism that only made Leonore’s do-it-yourself prison-break all the more believable. Consequently, her few moments of passion or pathos had a much greater impact, expressive by dint of breaking through Leonore’s otherwise unwavering composure.

Matthew Scollin made for a genuinely terrifying Pizarro, his iron-fisted villainy matched with a stentorian vocal color, equal parts dark and steely. If the high notes in his “Ah! Welch ein Augenblick” were a tad pallid, Scollin made up for it with the thrilling energy with which he dispensed Pizarro’s clipped, declamatory phrases.

By contrast, Pascale Beaudin’s peppy Marzelline brought plenty of buzz and excitement to the first act, engaging in a lively choreography with a basket of freshly washed prisoner’s sheets during the opening numbers. What her voice lacked in power it made up for with a sweet, luminous vocal quality and a captivating musicality.

Keven Geddes lent a bright, clear vocal quality and a charming sense of comic timing to the role of Jaquino, Marzelline’s would-be suitor. While his intonation could be slightly precarious in the higher passages, his diction was razor-sharp throughout.

All in all, Wednesday night’s performance of Leonore was a crowning achievement for Opera Lafayette, a testament to an arts organization at its most resourceful, most creative, and most industrious.

In placing Beethoven’s 1805 Leonore in dialogue with Gaveaux’s opéra-comique, in inventively reconstructing the opera’s long-lost aria, in highlighting the many aesthetic and political challenges that hindered its conception, and in giving it a refreshingly honest, grounded performance, Opera Lafayette has shown that Beethoven’s Singspiel is still in the process of being reformed, rethought, and renegotiated.

Opera Lafayette has made a strong case that Leonore is so important because of, and not in spite of, its aesthetic quirks. They have crafted a Leonore that wears its fraught conception on its sleeve, exposing a Beethoven subject to creative (and financial) failure.

Through their intervention, it becomes clear that Leonore’s creator was not Beethoven the genius but Beethoven the human. And that is precisely why the “Leonore Project” is so important in re-evaluating Beethoven’s legacy during the Beethoven anniversary.