That question hung in the air when Teatro de la Zarzuela Madrid revived Tomás Bretón’s opera Farinelli for first time since its premiere in 1902.

Performed in a concert version in a new adaptation by playwright María Velasco, Farinelli was seen on the opening night, February 15 – the first of the two sold-out shows – conducted by the company’s newly-minted Music Director, Guillermo García Calvo.

Born in Salamanca with humble beginnings in 1850, Tomás Bretón y Hernández went on to become an important Spanish conductor and composer of Spanish opera. Although now he is most known for his 1894 género chico zarzuela La verbena de la Paloma, Bretón’s inspiration was always to create a serious Spanish opera, incorporating the great European forms of that time (from his years of study overseas) to promote national music.

Bretón wrote a total of eight grand operas, starting from Guzmán el Bueno in 1867. After a couple of failures, Bretón finally achieved his most successful opera with La Dolores that opened in the same theater in 1895, followed by performances in Barcelona.

Farinelli was also part of the ambitious, and ultimately doomed, project for a permanent place for La Ópera Hispana, leading to the construction of the greatest theater that has existed in Madrid, Teatro Lírico. Inaugurated in 1902 with works including Ruperto Chapí’s Circe, Ricardo Villa’s Raimundo Lulio alongside Farinelli, it was closed and dismantled six years later, and the building was burned down in 1920.

Little is known about what motivated Bretón and his librettist Juan Antonio Cavestany to choose the story of the famous castrato for such an important occasion. The story itself most probably came from France, particularly with Eugène Scribe, who in 1839 came up with Carlo Broschi, Nouvelle Historique. Scribe took the liberty to invent many of the scenes there, including a love story.

At the first glance, the story shared many similarities with Claire van Kampen’s 2015 play with music Farinelli and the King, that played in Broadway in 2017-18 season and reviewed by my colleague Christopher Corwin here. In fact the opera would provide a nice counterpart to the play. While the play dealt more about King Philip V of Spain (especially as played by the mercurial Mark Rylance), the opera focused on the individuality of Farinelli, his (tragic) love life, and his relationship with his father and his friends while being employed in the court of King Philip (the King was not a character in the opera).

In the excellent program notes by important Spanish musicologist Emilio Casares Rodicio, he pointed out that Wagnerism, Italian verismo, French opera and historicism coexisted within the score of Farinelli. One glance at the stage solidified that notion, for Bretón employed a large orchestra and a large chorus – acting mostly as Greek chorus – for Farinelli. Interestingly, unlike the zarzuelas, Bretón limited the number of roles to a handful; only Carlos Broschi (Farinelli), his lover Beatriz (stand-in for the singer Elena Pieri), his father Jorge, his friend Alberto, and Philip V’s doctor (the comic relief of the opera).

The opera is structured into a Prologue and three acts. As customary for concerts in Teatro de la Zarzuela, each was preceded with a rather lengthy monologue describing the act. In this concert, Velasco’s monologues were executed with such a great conviction by the actor Emilio Gutiérrez Caba that it turned into riveting performance on its own. I was particularly taken aback by the intensity of them, particularly the one before Act 3, where the question “What is normal?” was explored and applied to our own life! 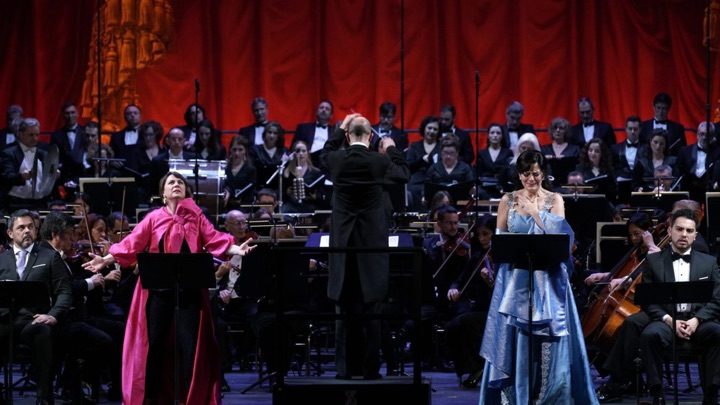 The Prologue served as detailed introduction and exposition to the characters (except for Beatriz and Alberto). Unlike the actual history, King Philip V heard Broschi while staying in his father’s inn and it cured his insomnia. That led for his castration (to preserve the voice) and his singing in his court. Broschi wanted to bring his beloved Beatriz, but Jorge strongly objected to it (the reason would be revealed in Act 3.)

Both Wagner and Italian verismo were evident in the chorus-dominated Prologue. The mood was light and playful, closer to opera buffa. While the real Farinelli lived in the heyday of Baroque operas, I assumed that such scores weren’t accessible at the time of Farinelli’s composition (for instance, Handel’s renaissance didn’t start till 1920 Göttingen Festival) and as a result Bretón composed a thorough bel-canto aria for Broschi in the Prologue, “Dejo esta estancia lúgubre y sombría”. In an ironic twist, this rather gloomy aria turns to be the one that healed the King and led the divo to his castration and fame.

Act 1 started several years later in the Palace, where Farinelli already made a name for himself. The chorus has turned nosy and sarcastic, and the opera’s tone changed to be more serious. This act introduced two new characters; first Farnelli’s friend Alberto who tried to enlist Farinelli’s help to woo the singer Beatriz, and in successive scene, Beatriz herself, who recognized Farinelli and threw herself in his arms!

I found it fascinating that Bretón chose to set the two central roles both to mezzo-sopranos (albeit one as a trouser role); in any other operas, the role of Beatriz would definitely be assigned to a soprano. I believe this was one of very few operas with two mezzos in the central roles!

While the program, as mentioned, listed Wagner and verismo as the major influences, there was one other name that crossed my mind, particularly in this act: Giuseppe Verdi. This act ended with a beautiful quartet for Farinelli, Beatriz, Alberto and Jorge (“¡Carlos, querido Carlos!”), recalling the famous “Bella figlia dell’amore” quartet from his Rigoletto.

Act 2 consisted of two sections; the first was back in the Palace, where Farinelli continued denying that he loved Beatriz, despite of her insistence that he was lying. The highlight for this part was definitely Beatriz’s heartbroken arietta “Como el ave en la selva”, followed by the tragic breakup between Farinelli and Beatriz.

The second part started with the most Germanic sounding part of the score, the hunting scene, before Farinelli launched into his barcarolle song “Soñolientos murmullos del bosque umbrío”, as he stood on the Royal Falua.

All hell broke loose in the last Act, which described the wedding of Beatriz and Alberto. Once again, the act was divided into two big scenes; the first one climaxed with the revelation from Jorge that Beatriz was also his daughter, therefore she couldn’t be with Farinelli!

The final scene (“Salve, Madre bendita de los amores”) was undoubtedly the most verismo of them all, as it clearly mirrored the famous “Regina coeli” from Pietro Mascagni’s quintessential verismo opera Cavalleria rusticana – which arrived in Madrid merely seven months after the premiere in Rome in 1890 – particularly when a central role rode above a praying chorus to express his/her feelings!

Please don’t get me wrong, despite of all those apparent influences, Farinelli was sounding undeniably Spanish, as it could only be written by a Spanish composer. I think Bretón truly achieved what he was looking for with this opera, so its long neglect was completely unjust, in my humble opinion!

Teatro de la Zarzuela assembled a top-notch cast for this presentation, and it elevated the performance that I saw that evening to extraordinary level. Chief of all was the Farinelli of mezzo-soprano Maite Beaumont. I had known Beaumont from a pair of the late Alan Curtis’ Handel recordings, as she memorably sang Zenobia in his 2003 Radamisto and Ruggiero in 2007 Alcina.

While she might have lost some agility and freshness in her voice, she remained an extremely committed performer, and her characterization of Farinelli – a truly demanding role – was very spot-on. Decked in black clothes draped in a pink cape, she moved from naïve Broschi to the despairing Farinelli at the last scene with gusto, never lost intensity or focus.

Teatro de la Zarzuela solved the “problem” of having two mezzos by having two very different mezzos. I was a bit taken aback when I first heard Nancy Fabiola Herrera sang Beatriz; hers was a round, full-blown Verdi mezzo compared to Beaumont’s lean Baroque voice.

The juxtaposition of her voice and Beaumont’s took a while to get used to, at least to my ears. Even their appearances contrasted each other, as she was dressed in strikingly beautiful baby blue gown! But Herrera’s dark voice color and elegant phrasing soon paid dividend especially in the Act 2 great duet “Tengo que hablarle” with Farinelli, shortly before the hunting scene. In that heartbreaking scene where Farinelli literally cut the ties with Beatriz, the difference of the voice made each character feel whole and very real, and the effect was catastrophic!

Thrown into the love triangle was the young Mexican tenor Leonardo Sánchez, who shone as Farinelli’s friend and eventual love competitor, Alberto. The role itself was rather thankless, and the opera didn’t have time to develop the character, but with his earnest and doe-eyed interpretation, Sánchez managed to gather’s the audience’s sympathy, and you couldn’t help but rooting for him!

As with the parallel role of Giorgo Germont, the part of Jorge, Farinelli’s father needs to be handled sensibly and with extra care. The veteran baritone Rodrigo Esteves was the perfect man for it; he was soft and caring in the Prologue and firm and tough for the final act.

With his great comic timing and warm persona, David Menéndez’s Doctor provided some respite from all the emotional intensity on stage, and Manuel Fuentes rounded up the cast nicely, making full use of his handsome voice in the small role of the conductor of the Royal Orchestra in the beginning of the second act.

In Farinelli, the chorus played an extremely important part, becoming a character on its own. Even the program notes pointed that fact out, “It is not excessive to note that we are facing a choral work. Of the 26 scenes, the choir is missing in only six.” Coro Titular del Teatro de la Zarzuela, under the direction of Antonio Fauró, truly rose to the occasion, alternatingly from friendly banters, to sarcastic comments and sad laments with great gusto.

At the center of it all stood Calvo, who masterfully combined those great forces with Orquesta de la Comunidad de Madrid, shifting through the many different musical styles, to create a coherent reading of the opera. Calvo – also the Music Director of the Chemnitz Opera – is a known Wagnerian conductor, and that manifested in very exciting hunting scene in Act 3.

Calvo, who worked closely with the singers as shown in the video below, also demonstrated great sensitivity towards the singers, letting the voices soar without burying them with the thick orchestra sound.

It was a truly historic and memorable night, and I hope this wouldn’t be the last time the opera re-surfaced. It was encouraging to see many recording devices on stage, so that such an important event could be treasured by many others. I wish that the success of this would lead to more explorations of the Spanish operas (Chapí’s Circe next, maybe?) in the future!