While last year’s finals were dominated by early nineteenth-century bel canto arias, this year’s finalists took on a remarkably broad range of music from a variety of repertoires. 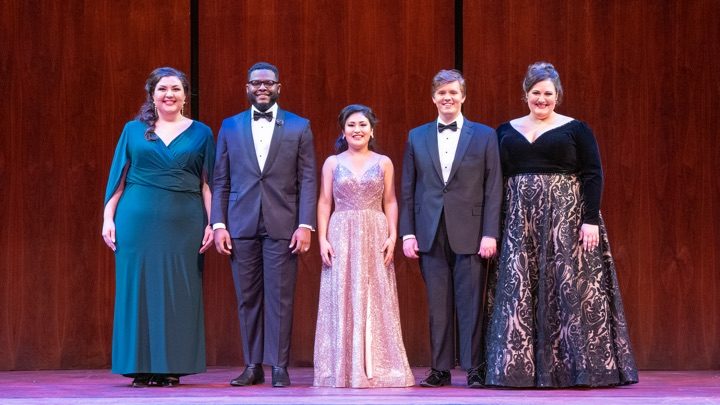 Possibly the most exciting aspect of the Met National Council Auditions is experiencing, first-hand, the kind of artists the next generation of opera singers are growing into. The event is an excellent showcase not only of the kind of repertoire these emerging artists are interested in performing, but also of the various musical approaches they take towards this repertoire.

While last year’s finals were dominated by early nineteenth-century bel canto arias, this year’s finalists took on a remarkably broad range of music from a variety of repertoires. Indeed, these young artists exhibited an impressive versatility, demonstrating wholeheartedly that they are well equipped to take on an increasingly diverse operatic landscape.

This breadth of repertoire often made for some jarring juxtapositions. Gabrielle Beteag, one of the evening’s winners, presented the most extreme contrast in her choice of repertoire. Her first aria, “Give Him this Orchid” from Britten’s The Rape of Lucretia, was delivered with heart-rending pathos, vividly capturing the shame and anguish of Lucretia’s shattered innocence.

This was paired with an electrifying performance of the Witch’s Hexenlied from Hänsel und Gretel, complete with an elaborate, high-camp dance routine – all jazz hands and samba hips. Beteag endowed these arias, poles apart in their musical and dramatic style, with the same careful attention to musical detail, her tone warm and rounded, with a powerful head voice that extended low into her range.

Two other winners, Blake Henson and Alexandria Shiner, paired sizeable nineteenth-century arias with twentieth-century American fare. Despite a few ill-placed breaths, Shiner delivered a radiant performance of “Dich, Teure Halle”, revealing a voice of substantial size and cut. However, it was her performance of “To This We’ve Come” from Menotti’s The Consul that was the highlight of the evening, a searing dramatic tour de force sung with crisp diction and an even, lustrous tone.

While Menotti’s aria might be read as a fiery outburst against tyranny and bureaucracy, Shiner’s interpretation was cold and desolate, projecting a profound sense of hopelessness: the aria’s final lines (“the day will come I know, when our hearts aflame will burn your paper chains”) were delivered with such icy devastation that they seemed almost ironic.

Henson’s powerful baritone rivalled Shiner’s voice in terms of size, with a vigorous high register which cut easily across the house. However, his tone was more uneven – gravelly or husky in places, and sometimes a tad forced.

Henson gave a spirited performance of “Ah, je meurs, l’âme joyeuse” from Don Carlos; while I am glad he chose to sing it in French (that Don Carlos simply sounds better in French is a hill I am ready to die on), his vowels were so warped and rounded that it was often difficult to make out the text.

By contrast, his performance of “Oh, Lawd Jesus, hear my prayer” from The Emperor Jones showed an acute dramatic sensitivity to the text, with Henson drawing on a broader range of vocal colors to match the polychrome modernism of Gruenberg’s score.

The other two winners, Denis Vélez and Jonah Hoskins, did not cultivate the same variety in their choice of arias, sticking, instead, to tried and true operatic classics. Vélez matched vocal control with musical nuance in her performance of “Depuis le jour”, wielding a fresh, glossy sound well suited to this dreamy French repertoire. Her “Tu che di gel sei cinta” was also elegantly rendered, if a tad safe dramatically; regardless, Vélez showed a great affinity for Puccini’s soaring phrases and will no doubt emerge as a compelling interpreter of the verismo repertoire as her career progresses.

Hoskins conjured an impressive vocal display in his “Pour mon âme”, his sweet, clear lyric tenor making light work of the aria’s many high Cs. Hoskins showed a flair for showmanship, brimming with charm and charisma as he ornamented his final C with a stratospheric upper neighbor note. His “Sì, ritrovarla io giuro” was much less flashy, lingering in his quieter, more cumbersome middle voice. Still, Hoskins was the youngest singer on the program and is already in possession of a remarkable vocal talent; over time, this lower register will undoubtedly become stronger and more supple.

The other finalists gave admirable performances across the board, no doubt complicating the judges’ decision. Chastiti Lashay harnessed a muscular chest voice and rich high register in her performance of “I Want Magic” from A Streetcar Named Desire, and a fervent, glowing tone in her “Io son l’umile ancella”.

Lindsay Kate Brown’s performance of “Deh! Proteggimi, o Dio!” from Norma was vocally robust but lacked variety and intention; her “Da, chas nastal!” from Tchaikovsky’s The Maid of Orleans had much more focus – both musically and dramatically – sung with a mesmerizing intensity which effectively captured the conviction of Jeanne d’Arc’s religious zeal.

A sprightly stage presence did much to compensate for the smaller size of Xiaomeng Zhang’s voice, and, while large sections of his “Vedrò mentr’io sospiro” and “Mab, reine des mensonges” were inaudible in such a large house, the baritone proved adept at shaping vocal character.

While Jana McIntyre sang with a brisk, buoyant tone, she encountered intonation issues in her coloratura which surfaced, periodically, throughout both arias. Yet, her “O zitt’re nicht” possessed a delightful sense of Mozartian line and her “A vos jeux, mes amis”, a captivating energy.

Bertrand de Billy’s conducting left much to be desired, his tempi heavy and lugubrious and his phrasing a tad tentative, as if the arias were under-rehearsed: with such young singers, de Billy might have helped them along with more drive and support from the orchestra.

Lisette Oropesa proved a warm, lively host, proudly announcing her own generous financial contribution to this year’s prize pool; it was touching to see one of the Met’s most acclaimed stars give back to support these young singers in the early stages of their careers.