A change is gonna come

In the opera world, one of the pieces that underwent a multitude of changes in its reception was undoubtedly Richard Wagner’s longest and most Germanic opera, Die Meistersinger von Nürnberg. 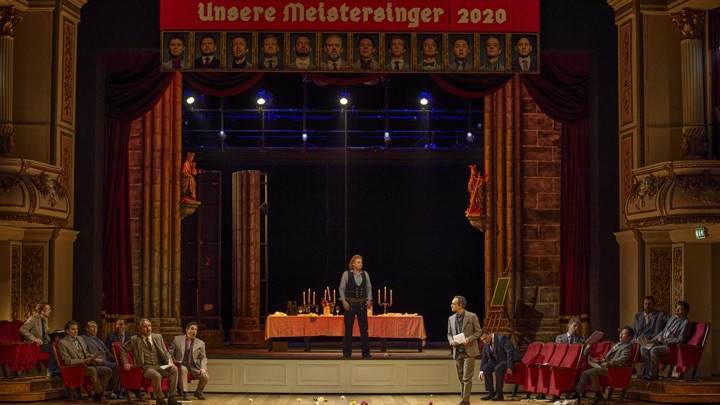 Heraclitus the Greek philosopher used to say, “The only constant in life is change”, a wise principle that governs everything from the Universe to our daily life. Change is also continuously happening in the arts – in theaters, in operas – both in how the presenters evolve with time, and also in how the audience responds to it. In the opera world, one of the pieces that underwent a multitude of changes in its reception was undoubtedly Richard Wagner’s longest and most Germanic opera, Die Meistersinger von Nürnberg.

Originally intended to merely be a comic follow-up to Tannhäuser, the story took on a life of its own – via Schopenhauer’s influence and Wagner’s own difficult chapters of his life – to be an acute observation of the importance of the arts (particularly of music) in our lives and in society at large. After the successful premiere in 1868 and subsequent spread all over the world (reaching the Met in 1886), the opera, particularly Hans Sachs’ final speech from Act 3, became the rallying point of German nationalism, culminating in the usage of it as Nazi propaganda.

After the World War II, Die Meistersinger’s fortune seemed to be reversed. The first Bayreuth production after the war removed any references to Nuremberg so much that it was dubbed Die Meistersinger ohne Nürnberg (The Mastersingers without Nuremberg). Even more damaging was Wagner scholar Barry Millington’s argument, in his 1991 article “Nuremberg Trial: Is There Anti-Semitism in Die Meistersinger?”, that Beckmesser represented a Jewish stereotype.

Since then, opera directors – in the words of critic David Karlin reviewing Barrie Kosky’s production at Bayreuth – “shift uneasily in their seats when trying to plot their path through the minefield that is Die Meistersinger von Nürnberg”, resulting in the multiple reimagining or reinterpretation of the opera. Wagner himself, for example, made an appearance in Kosky’s, while Stefan Herheim’s imaginatively turned the story into a parable about the making of art (inside Hans Sachs’ head).

Nevertheless, despite the fierce controversy that tends to follow, Die Meistersinger interestingly continues to be relevant in our life. Philip Hensher, in a fine article prefacing the 2017 Covent Garden production remarked, “When the curtain goes up […] the audience will be faced with not just a supreme entertainment, but five hours of apt questions for the age of Brexit, Pegida and Trump. Who belongs here? Who decides?”

Jens-Daniel Herzog’s mounting of Die Meistersinger, that I saw at the beautiful Dresden Semperoper on February 16, was along the lines of such reinterpretations. The production was premiered at 2019 Salzburg Easter Festival with the same forces and roughly the same cast, a co-production with Semperoper Dresden, the Tokyo Bunka Kaikan and the New National Theatre, Tokyo. (It will travel to Tokyo in June). 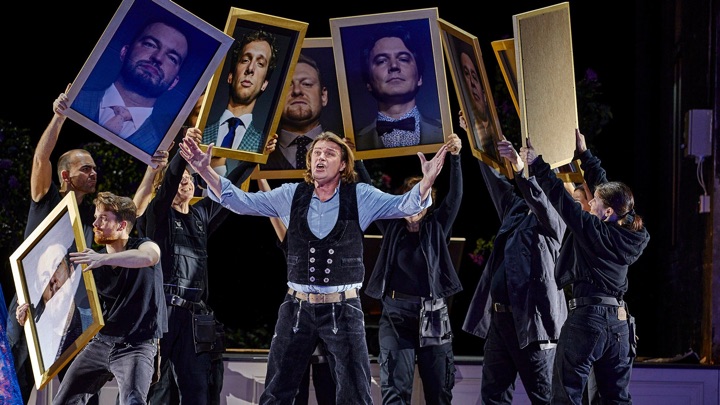 Just like the piece, the show itself encountered major changes along the way, particularly in the role of Eva; in Salzburg, Jacquelyn Wagner replaced Genia Kühmeier, who withdrew for private reasons, and in Dresden, Camilla Nylund took over for the whole run except the final one (that I went), where Sara Jakubiak was announced for the role just 10 days prior!

I came to this performance with a lot of apprehension. Most reviews from Salzburg peppered with “confusing theater-in-the-theater”, and I was prepared to hate the production. Lo and behold, not only did I thoroughly enjoy it, I also thought it was fully realized and dramaturgically (by Johann Casimir Eule and Hans-Peter Frings) sound! Obviously, just like any other reimagined works, the actions on the stage didn’t always match the texts, but the spirit of the opera was definitely there, and Herzog stood firm in his vision, creating a coherent staging.

Rather than the theater-in-the-theater concept, to me, the “Nuremberg” in Herzog’s ideas pointed out to a small community behind a small opera company. If you stopped and thought for a second, it was pretty easy to draw parallel from managing a small town and managing a small opera company! That opera company had its clerk (Beckmasser), its rich donor/banker (Veit Pogner), its leader who happened to also be working in the costume/shoes department (Hans Sachs), etc.

Von Stolzing was still the same outsider that tried to break into the community with the intention to secure the rich man’s daughter. The song contest was no different from the Operalia or Cesti competitions. Within that context, everything in Herzog’s vision fell into place nicely, and the re-thinking wasn’t as radical as others!

Herzog’s concept was brought into fruition no small thanks to the richly detailed and highly colorful sets of Mathis Neidhardt. Neidhardt painstakingly cloned the boxes of Semperoper to be placed on either side of the stage, and in the middle he effectively put a giant turntable that rotated between the stage area of said opera house and Hans Sachs’ and others’ offices. That allowed smooth transitions between scenes without any breaks, essential for the fight scene in Act 2 and the festival in Act 3. Fabio Antoci’s excellent lighting contributed greatly in providing clarity to where to look during each scene, and Sibylle Gädeke’s everyday work clothes sold Herzog’s vision further!

However, the greatest strength of Herzog’s staging to me was – in working closely with the singers – how detailed he individualized each character, both in mannerisms and in movements, especially since many of them differed from the conventional roles. I will dwell on this more as I discuss each singer below but suffice to say that the resulting effect was so wholesome that it provided me with a lot of food of thoughts and fresh relook on the opera, long after it ended. 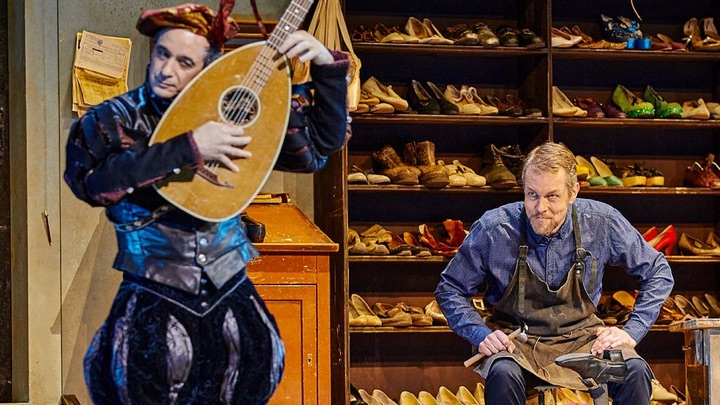 Herzog even – as a sign of times – threw a little female empowerment moment (in a basically male opera) with the ending; it was Eva, not von Stolzing, who rejected the idea of being a Meistersinger by tearing up his picture and leading him to run away! Also, by making Beckmesser a more sympathetic character and setting the problematic Act 3 monologue as a conversational piece between Hans Sachs and von Stolzing, in my humble opinion Herzog found a happy medium that enabled him to dig deeper into the humanism aspect of the opera, a truly admirable achievement!

While the production was great, the musical aspect of it was on a whole different level altogether. The main selling point for me (despite the reviews) was obviously the conducting of German conductor Christian Thielemann.

From the moment the great Vorspiel was played, his conducting could only be described as truly glorious. Compared to the 2008 video above, that evening he seemed to be calmer and more elegant. A self-identified (cultural) conservative, he put emphasis on clarity and transparency, and every single detail could be heard easily.

I couldn’t help thinking how the Vorspiel was a perfect “musical trailer” for the whole opera; a fact that never crossed my mind before. There was a great sense of joy, and yes, pride, permeated the score, and by the time the trumpets blared in triplets at the climactic moment (taken at slower pace) it was true goosebump-inducing moment!

He maintained the pace and complete control over the whole opera. The Prize song was marked with expressiveness and legato phrasing, and the quintet of Act 3 with full tenderness. He even found beauty in Beckmesser’s serenade in Act 2. If I might nitpick, I just wished the whole fight scene that ended Act 2 wasn’t as tightly controlled but rather more incendiary. He was also very sensitive to his excellent singers, almost never covered them with the orchestra; while at the same time he wasn’t afraid to let the orchestra rip!

Thielemann was blessed with an excellent cast that was fully committed to the production yet remained highly individualized. There was nary a weak link in it, and as a whole I felt that they were stronger than the 2008 cast from the trailer.

A consummate musician, he projected deep emotion both in the lyrics and in his body language. Herzog didn’t specify Hans Sachs to be the usual saintly father figure, but a full flesh-and-blood, who had desires, ambitions and longing himself. When he confessed his feeling to Eva, you could almost feel his lust; likewise, the sense of frustration was so evident while he sang about cobbling was a hard work! The opera ended with Hans Sachs laughed while Eva led von Stolzing away: no doubt he was agreeing with Heraclitus that change was inevitable!

Von Stolzing in this version was closest to the texts, but as embodied by Klaus Florian Vogt, here he was also child-like, naïve and gullible. He clearly despised the Meistersingers, but he was also easily duped into entering the song contest, and at the end, he was seen to be almost agreeing to join the Meistersingers at the end had Eva not made the decision for him. Vogt probably could sing the role in his sleep, but yet he still managed to find new nuance for von Stolzing. His lyrically bright voice sounded stronger than the last few times I heard him, and it conveyed the youthfulness required for this reading.

Adrian Eröd’s Beckmesser was truly a study of how to reimagine a character. He, too, was a veteran that managed to find new room in the interpretation. His Beckmesser was not loud or overbearing or played for laugh. He was just a member of the guild that was peeved at the arrival of this boorish person vying for Eva.

There wasn’t anything remotely comical in his Act 2 Serenade and when he also ended up playing the fool in Act 3, it was all part of being human. Eröd carefully varied his singing to express emotions while maintaining sounding natural, making his Beckmesser rather friendly. As mentioned, this was the first time I heard Beckmesser’s Serenade sounding sweet and lovely!

Despite shorter time for her to rehearse, Jakubiak felt completely at ease with the (almost) modern take on Eva. Here she was a full woman, free to make her own choices, and even to lead von Stolzing to think. Her voice sounded warm and round, and she matched Vogt beautifully in their duet. She also provided a lot of contrast with her rich father, Veit Pogner, sang with booming voice by Vitalij Kowaljow. Like any businessmen, there was something cunning in his take and during the long monologue in Act 1, you could almost see that he had ulterior motive to present her daughter to the song contest’s winner!

Sebastian Kohlhepp’s David and Christa Mayer’s Magdalene served their roles sufficiently in the conventional way, although they weren’t really portrayed as lovebirds. Kohlhepp, with his darker timbre, made a sharp distinction with von Stolzing (as they tended to have similar voices), and he acted believably as the comic relief of the opera. The comprimario roles were all filled with capable voices, and they worked well as a team, with special mention for Oliver Zwarg’s dignified Kothner.

With such a high-level music-making and a thoughtful and thorough production, the evening turned into a very special occasion indeed. A long and heartfelt standing ovation followed the performance I saw, showering the singer, the chorus, the orchestra and especially Thielemann for such a spectacular experience. Truly, a better Die Meistersinger would be hard to find!