Although I usually pretend that I don’t have the diva-worship gene, sharp-eyed readers of parterre box will know that since I joined the site in 2011 as “DeCaffarrelli” I have often swooned as an Ann Hallenberg-fanboi. 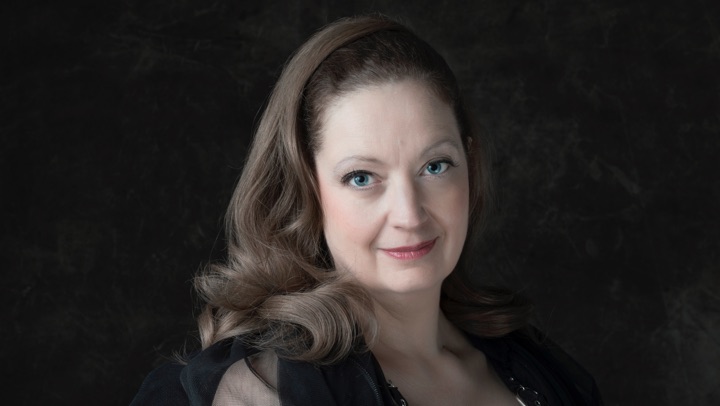 So naturally I was psyched for the Swedish mezzo’s ballyhooed concert Thursday night at Zankel Hall, astonishingly just her second-ever appearance in New York City. I must plead guilty to being its primary hype-ster; however, the roundly enthusiastic audience response to her all-baroque program suggested I haven’t been wrong in my long-held enthusiasm.

While I suspect many there were hearing her in person for the first time, the nearly two-and-a half hour concert was our fifth encounter after Berlin followed by Paris, Brussels and Krakow. Like all prima-donna fanciers, I even had to cope with the crushing disappointment of a prima donna cancellation: in 2004 she was supposed to appear as Licori in Vivaldi’s La Fida Ninfa at the Théâtre des Champs-Elysées but a slip in my program announced that Anna-Maria Panzarella would be taking her place.

Panzarella was wonderful but I missed Hallenberg whom I had “discovered” in an ear-opening Berlin Hercules two years earlier. At least there exists a scratchy broadcast of another Fida performance so I still got to hear her “Alma oppressa.”

Although she was regularly appearing in ecstatically received operas and concerts in Europe and building a large and irresistible discography, the US remained uninterested as even now her engagements here since a debut in Duluth (!) over 25 years ago can still be counted on one hand. I’d have been front and center at her much-belated first NYC appearance in Vivaldi’s Juditha Triumphans at Carnegie Hall in early 2017 but I was just out of the hospital.

Happily, Carnegie Hall invited her back and she and the Venice Baroque Orchestra appeared at Zankel as part of a four-city tour which continues tonight in Boston and ends in Champaign-Urbana on March 5. Performing eight da capo arias mostly by Handel and Vivaldi, Hallenberg again and again displayed her familiar—and exceptional—qualities: spectacular coloratura facility wedded to an intensely inviting musicality which always served the composer rather than her own self-aggrandizement.

If the opening “Dopo l’orrore” from Ottone was unduly modest, the ornately twittering interplay with concertmaster Gianpiero Zanocco in “Quando il flebile usignolo” by Pietro Torri proved wondrously beguiling. As usignolo means nightingale, presumably the aria’s inclusion was a nod to the concert’s puzzling title “The Swedish Nightingale,” which references a very different Swede, soprano Jenny Lind who toured the US presented by PT Barnum.

Two impressive Vivaldi arias followed; Hallenberg took a refreshingly straightforward approach to the celebrated “Gelido in ogni vento” from Farnace refusing to drag it out endlessly in the manner of several recent singers. The fiercely florid “Armatae face,” an encore from the Juditha of three years ago and the evening’s first piece to evoking the Furies, brought the first half to a fiery conclusion.

The VBO which had earlier been unimpressive playing thinly and with suspect intonation was transformed after intermission vibrantly accompanying Hallenberg while attacking its third and fourth Vivaldi concerti with infectious sprezzatura.

As rousing and captivating as were her dazzling flights of sixteenth notes, the mezzo’s most treasurable selection was Gismonda’s gently rocking “Vieni, o figlio” in which the cunning villainess tenderly addresses her errant son. Hallenberg raptly spun out the mother’s floating lines with seemingly endless breath often blending in lushly sublime unison with the violins.

While one has heard Ariodante’s wrenching “Scherza infida” performed with just a mournful simplicity, Hallenberg dug deeply into the hero’s anguished betrayal sometimes spitting out the repeated “infida” as a bitter cry of pain sometimes as a dazed moan of bewilderment. Whereas in the past the mezzo’s singing usually exuded patrician nobility, several of Thursday’s arias revealed a startling and surprising dramatic engagement; only once—in a yowling cadenza to the Farnace aria–did she perhaps go too far.

The boundless generosity with which Hallenberg imbues her performing was reflected in the rich bounty of the selections: eight gorgeously ornamented arias, several lasting nearly 10 minutes, which were then followed by two markedly contrasting encores: the maniacally bracing “In braccio a mille furie” by Porpora and an expectedly heaven-sent “Lascia ch’io pianga” from Handel’s Rinaldo.

The printed program, however, ended with a stupendous rendition of the famed “Son qual nave” written by Riccardo Broschi for his brother, perhaps the most famous of all castrati, Farinelli. Hallenberg has toured widely over the past decade with a program of arias written for that shorn primo uomo preserved in a rousing live recording.

Her most recent studio effort The Farinelli Manuscript recreates the remarkable portfolio of six arias presented by Farinelli to Empress Maria Theresa in 1753 that includes dizzying ornaments used by divo himself.

After listening to both of these CDs one might be tempted to paraphrase a renown encomium saluting the 18th century singer: “One goddess, one Hallenberg!”

Hallenberg has been featured five times on my weekly Trove Thursday series of live performances: in Handel’s Arianna in Creta  and his marvelous Marian cantata Donna, che in ciel; Vivaldi’s Motezuma (a performance I attended) and his sacred motet Vestro Principi divino; and as the tragic Veronese teen in Zingarelli’s Giuletta e Romeo.

Although there are lots and lots of live Hallenberg recordings available on YouTube, I couldn’t resist adding otherwise unavailable morsels which reveal yet another side of her voluminous 18th century repertoire: two recent selections by Rameau.