For those of you keeping track at home that’s four substitutions for three roles and the curtain hasn't even gone up yet. 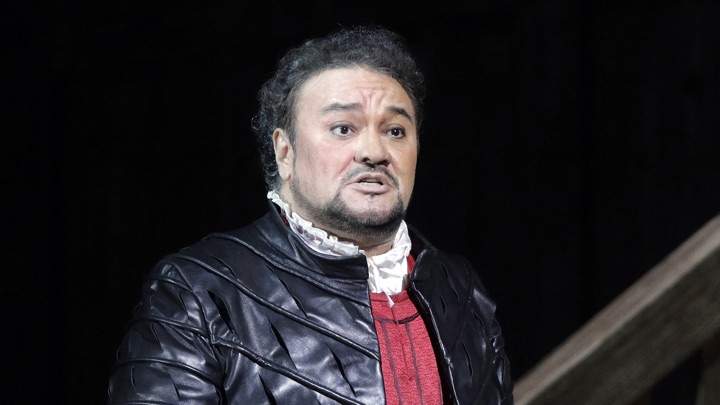 When the General Manager of an opera company steps in front of the forecurtain prior to the performance it’s almost inevitable that the news isn’t good. The best you can hope for is a ‘begs your indulgence for their imposition’. When President and CEO of LA Opera Christopher Koelsch walked out on stage before Saturday night’s performance of Gaetano Donizetti’s Roberto Devereux I made myself comfortable. Because if he was about to recount all of the rearrangements, substitutions, and indispositions that have plagued this production since its announcement it was gonna take a minute.

Luckily he didn’t even delve into how this production’s entire raison d’être was no doubt so He Who Must Not Be Named could add another baritone role to his growing repertoire. What with the ensuing scandale and His inevitable resignation, a suitable, and hopefully distinguished, replacement had to be found. By some alchemy it was announced that Quinn Kelsey would not only be making his eagerly anticipated debut with LA Opera but his role debut as well. General rejoicing followed quickly on.

He was also kind enough to spare us all the details of Alice Coote having to withdraw from the role of Sara, Duchess of Nottingham for family reasons a few weeks ago, prompting yet another search and happy outcome.

No, Mr. Koelsch was there to speak of miracles and I’m certain he wasn’t using that word lightly. For just this week, mere days (hours even) before the final dress rehearsal our scheduled Elizabetta, Spanish soprano Davinia Rodriquez, had taken ill and had to withdraw.

Take a moment to imagine how many sopranos might know this famously demanding role? How many many have the score for Roberto Devereux on their bookshelves waiting to be dusted off? Now consider how many of those sopranos may actually still be alive.

By some miracle Angela Meade had just returned home from engagements in Italy and after spending a few precious hours napping got the call from Mr. Koelsch (who was no doubt weeping by this point). Having had some previous experience in the role (10 years ago at the Dallas Opera in community out-reach performances my sources say), and about to step into the Met’s production this September (so she’s been studying, bless her), Ms. Meade girded her loins, repacked her suitcases, and graciously consented to the bailout.

Mr. Koelsch went on to explain that such a last minute replacement precluded Ms. Meade from re-learning a complicated staging. Therefore an actress, Nicola Bowie (who turned out to be the production’s choreographer and an inspired stand-in), would mime the role of Elisabetta while Ms. Meade stood stage right handily tricked out with music stand and score. Mr. Koelsch took his leave to the not disappointed cheers of an undoubtedly relieved audience.

For those of you keeping track at home that’s four substitutions for three roles and the curtain hasn’t even gone up yet.

The production itself originated by the Dallas Opera in 2009 directed by Stephen Lawless and designed by Benoit Dugardyn served as a backdrop for all three of Donizett’s Tudor operas there (Maria Stuarda in 2007, Devereux in 2009, and Anna Bolena in 2010) and was recently mounted by the Canadian Opera Company and San Francisco Opera. Both of these were as a vehicle for Sondra Radvanovsky.

A red velvet forecurtain trimmed with gold brocade served as a screen to project a modest history lesson for those who may not be familiar with the story of Elizabeth I and her fascination with the, handsome but unreliable, 2nd Earl of Essex or have missed the innumerable films and television presentations on the subject.

The overture is staged, giving us Elizabeth as a child and her parents, Anne Boleyn and Henry VIII, imprisoned in museum display cases at the outset whilst downstage Gloriana vanquished the entire Spanish Armada with a single shot pistol, to the general mirth of the audience.

Mr. Dugardyn designed his unit set so the royal court resembles Shakespeare’s hallowed wooden O with galleries reaching up to the full height of the stage. The chorus, cleverly staged to multiply at times on the balconies almost as if by magic, did strong work all evening and sounded formidable.

First up to bat was Ashley Dixon as Sara, Duchess of Nottingham. She has a lovely scena with chorus where she confesses her love for Devereux, her husband’s closest friend and the center of the royal attentions. Ms. Dixon may have a relatively short C.V. but she was a winner of the Metropolitan Opera National Council Auditions in 2018 and just completed two seasons as an Adler Fellow with San Francisco Opera.

She moves gracefully (in this production most problematic) and sounds so young and so incredibly fresh you forget that all mezzos don’t have to sound like your grandmother after a shot of whisky. She handily kept up with her more experienced colleagues all evening and proved their equal. I’m certain we shall hear more of her.

I had only heard Quinn Kelsey on the recent Met Live in HD relays of Aida and Traviata and although I found his voice attractive nothing can prepare you for what he sounds like live in the house. The ease of production plus the plangency and mellowness of his tone in the cavatinas are nothing short of phenomenal. None of that straining to hear the baritone over the orchestra nonsense. Both his great scene in Act III and the ensuing duet with Sara veritably crackled with intensity. His bel canto line was scrupulous and his decorations easy and clear. During his aria it was hard not to let my mind wander to all the other roles I can’t wait to hear this voice in.

Meanwhile the last man standing was our Roberto Devereux tenor Ramón Vargas. Now in the Indian Summer of his career he remains a paragon of vocal virtues at 58 years old. A fact that astonishes even more when you hear the still youthful tone and near perfect support he offered up all evening. His last act scena from the tower, “Bagnato il sen di lagrime.” veritably dripped real tears and although you could tell it’s jaunty cabaletta presented its own set of challenges he met them head on and triumphed.

I enjoyed Meade’s Norma here in 2015 and I’m happy to report there’s been some considerable vocal growth since then. The bottom of her voice has not only filled out but has found a deeper anchor and that has further enriched the middle voice. The top still seemed a little disconnected once or twice on Saturday night but I’m going to put the blame for that on a role that requires her to hit all the notes on the staff, both above and below, sometimes within the same page.

She sang with far more bite then I’d ever heard from her before and was unstinting in her dramatic delivery in the accompanied recitative. If the trickier fioratura didn’t completely sound in her opening aria and cabaletta the intention was certainly there if not total precision. It’s hard to believe she’s only been singing professionally for a decade. Her high descending phrases in “Vivi ingrato” in the last act were most affecting and she threw herself into the great Act II finale (how often is that the sweet spot with Donizetti?) with a stunning and agile ferocity. She is obviously coming into her prime and it’s something to hear.

As her dramatic doppelganger onstage Nicola Bowie struck all the right poses and attitudes as Elizabetta while enabling the singers onstage to interact with her. She was most likely the only choice to carry this tricky assignment out and she is responsible for a good deal of the evening’s success. Brava.

The secret to Donizetti is balancing the brassy martial fervor with the bel canto introspective moments and our evening’s conductor Eun Sun Kim made all of it appear seamless. For all the sturm and drang surrounding the staging there wasn’t a moment of hesitancy on anyone’s part and that only speaks to her strong and supple leadership. Balance between stage and pit was ideal all evening and the orchestra textures were crisp and rhythmically alert. Ms. Kim was just named Music Director designate for San Francisco Opera starting in 2021 and it is easy to understand why after a performance this assured and accomplished.

I found Lawless’ production unnecessarily fussy at points. The staging of the overture simply turns that piece, meant to set the mood of the performance, into background music that doesn’t stay with anyone. The lack of benches and chairs precipitated the principal singers sitting on the edge of two very small steps that surrounded the main playing area or worse yet on the floor which is simply unrealistic and ungainly.

Large portraits were held aloft in the gallery when characters were mentioned but not present for little good reason. However, the handling of the chorus was exceptional and Ingeborg Berneth’s costumes and Christopher Akerlind’s lighting were both evocative.

Sometimes the mounting of the production provides as much, if not more drama, than the staged theatricals. I’m not certain if Ms. Meade plans to actually don the motley at any point but five more performances remain until the 14 March. This is a great chance to see an excellent presentation of this very rarely performed work with exceptionally fine singers.