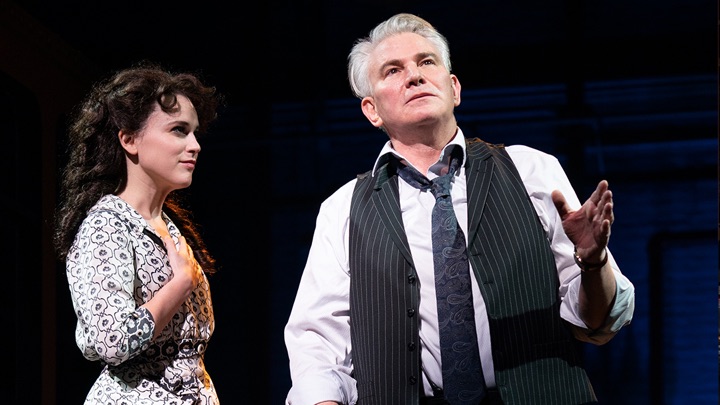 In 50-plus years of theatergoing, I’ve made a few dumb mistakes—none bigger than not going to Mack and Mabel in July 1974, when it was then in a pre-Broadway tryout at the Dorothy Chandler Pavilion in Los Angeles.

Looking back, I have no idea how I let that happen. I’d attended the national tour of Mame several years before, which, at age 11, turned me into an ardent Jerry Herman fan. (Secretly, I hoped someone would discover and cast me as young Patrick, transporting me out of dreary Van Nuys, California and into glamorous Manhattan. “Long pants at last!”)

I was also a big  fan of the three star performers in Mack and Mabel: Robert Preston, Bernadette Peters and Lisa Kirk, all of whom I knew mostly from recordings. I even recall a night when several high school friends invited me to go with them, since cheap student tickets were easy to score. “No thanks,” said I.

Who remembers now why I didn’t go? But regret at that bad decision still rankles.

Because I wouldn’t get another chance. Although M&M ultimately made it to Broadway in October 1974, its stay was short lived: less than two months, then over and out. In the decades that followed, a groundswell reputation built around the score, which many—myself included—thought Herman’s best.

But despite some efforts to revise and revive the show, it remained mostly elusive, at least as something to see. And, as often happens in that situation, its legendary status grew. 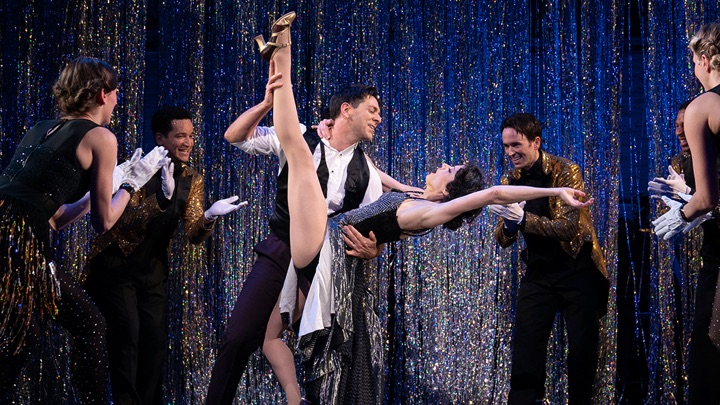 For some time, M&M has been at or near the top of Encores! audience request list. This season, it finally came to be—in a stroke of timing poignant enough to suit the show’s Old Hollywood setting. Announced in August, Herman lived long enough to know it would happen, but just six weeks before the performances took place, he died at age 88. (In a lovely tribute, three large photos of the composer/lyricist were lowered as the orchestra played the Entr’acte.)

M&M is, indeed, a story about the birth of movies, based on real characters though very casual with the surrounding facts. In any case, the story might be described, in the purple prose of that genre, in terms of Triumph and Tragedy. As silent movies grow into a national enthusiasm, rising director Mack Sennett makes a star out of Mabel Normand, a waitress from Flatbush. Their careers skyrocket and they fall in love. Alas, it all proves fleeting. Sennett’s directorial star fades with the advent of talkies; Normand, a superb comedienne and charismatic beauty, becomes addicted to heroin and dies at 37.

The loving, skillful restoration offered by Encores! performed a great service to musical theater lovers with a show that was itself a bit of a wild ride. Some aspects confirmed the greatness that so many of us hoped lurked, unseen, in M&M. Others, alas, illustrated why the show ultimately didn’t work… and likely, never will.

Let’s start with the concept itself. As even my brief synopsis will suggest, throughout M&M, there are strong signs that Herman—whose dominant mood is always optimistic pluck—wants to take us in a different direction. The show is framed with Sennett narrating previous events from the perspective of one who lost everything. The beginning and final curtain are notably muted. Mabel’s marvelous 11 o’clock ballad, “Time Heals Everything,” finds her already in a drug-fueled fugue state.

More surprising still is “Tap Your Troubles Away,” which interweaves a manic tap number with a murder.

That song in particular made me wonder: was M&M Jerry Herman’s attempt at a Kander and Ebb-style musical? When Cabaret opened in 1967, Hello, Dolly!—which, of course, is Herman’s magnum opus, at least in terms of commercial success—was still enjoying a healthy run. Still, this composer-lyricist, along with book writer Michael Stewart, would surely have been aware of a seismic shift taking place in musical theater. Perhaps both wanted to show that they, too, could be part of the revolution. 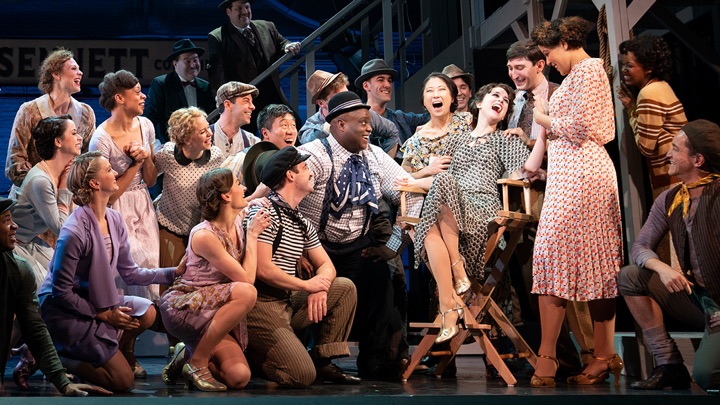 But if M&M is Herman and Stewart’s attempt to work in a darker palette, they don’t do it consistently. Much of the first act feels formulaic and contrived, hung on thin jokes rather than character development. The increasingly somber tone in Act II is more suitable—but it’s too little, too late, and too detached from what’s come before.

“I promise you a happy ending,” sings Mack at the close of the show—but you could almost imagine it as Herman and Stewart’s own explanation to an audience that loved them for a very different kind of writing. The M&M creators ultimately don’t give us that “happy ending.” But I wonder—were they ambivalent about it? It certainly feels that way.

Director Josh Rhodes’ production delivered what Encores! shows manage best: an elegantly minimal staging that also clearly limns the narrative arc. I found Rhodes’ use of platforming here far more effective than in his last Encores! show, Grand Hotel. It doesn’t hurt that M&M is a much better work, and that the platforms here neatly doubled as a soundstage.

Rob Berman and the Encores! Orchestra performed, as always, like champs. The ensemble performers were terrific, with special props to Michael Berresse, whose charisma and grace are ageless, and the ardent, lovable Ben Fankhauser.

Lilli Cooper was terrific as Lottie—a centered, spellbinding presence, she most of all among the cast found the sense of Brechtian distance that at least some of M&M calls for.

Alexandra Socha was an exceptionally fine Mabel, full of sparkle and emotional openness. She has a wonderful voice, too, though her style occasionally employs a few too many ‘60s pop inflections. (If anyone wants to make a biopic about Connie Francis, Socha is your go-to leading lady!)

Douglas Sills (Mack), here as always, is a winning performer, though now he has to deal with an increasingly recalcitrant voice that isn’t always on pitch or capable of dynamic variety. Nor, frankly, is Sills’ funny signature persona—antic and harassed—a good fit here. He’s more like one of Sennett’s Keystone Cops than the exacting, forbidding director himself. It says a lot for Sills’ professionalism that he pulled it off, though I can imagine how marvelous Preston—who could command a stage without seeming to do anything—would have been.

I can also imagine Kirk as Lottie, and Peters as Mabel. (The latter, by the way, was in attendance at Saturday evening’s show.) But of course, that’s all I can do. I ended up seeing the three original stars give memorable performances in other things… and there’s a cast recording, photographs, and even some limited film footage. All of it helps—but a mental recreation isn’t the same thing.

Still, if time doesn’t quite heal everything, it helps. Even more, Encores! helps. I’m very grateful to all concerned for what to me is their strongest show in a while.