If only she'd been able to sing more than 10 minutes of Bjork's music! 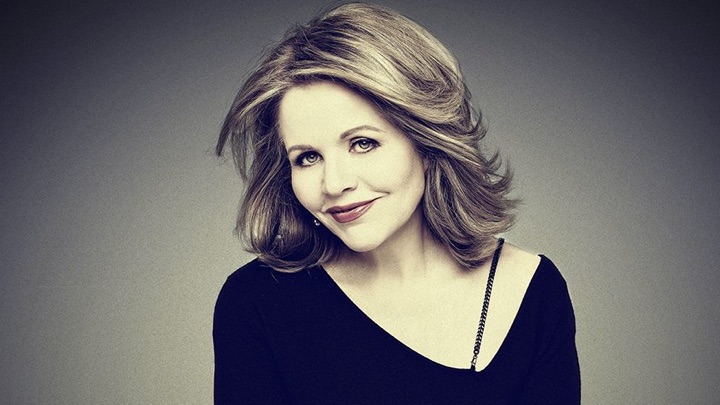 Renée Fleming covered Björk with a youthful sensitivity that made a convincing argument that popular music belongs at the symphony hall—if only she’d been able to sing more than 10 minutes of Bjork’s music.

The concert, conducted by Jaap Van Zweden with plenty of verve, began with Ellen Reid‘s “What if the World as You Know It Doesn’t Exist?,” ten minutes of dizzying descending glissandos, thrumming strings, and sharp, energetic percussion.

Three sopranos (Eliza Bagg, Martha Cluver and Estelí Gomez) provided wordless oohs, which shifted from seductive to sinister and finally to soaring. This was a pleasure to hear, with great use of kaleidoscopic shifts of timbre combined with poignant melodies. Reid described it as a response to the feeling of disembodied rage, which she then intercuts with moments of clarity hope.

Then Fleming took the stage in a sparkling black dress and some truly exceptional giant hair, to sing two of Anders Hillborg’s The Strand Settings, a collection which she premiered with the NY Phil in 2013 and are featured on her album Distant Light, along with the complete set of her Björk arrangements.

Strand’s poetry has a sordid, desolate quality, a grimness that gives way to only dull glimmers of color, Fleming brought these out nicely. The first piece, “Dark Harbor XXXV” featured a lot of Fleming’s buzzing, purring chest voice, while also giving her plenty of moments where she can show off her signature pianissimo high notes and fabulous messa di voce.

While she sang beautifully here, I found myself a little unconvinced dramatically. Fleming has a kind of sweetness to her voice and general persona, that makes lines like “down by the bus terminal, hanging out” feel incongruous, almost disingenuous from this elegant lady in black sequinned couture.

It felt a bit too “trying-to-be-edgy” for me, as if her voice is simply too sincere to get down in Strand’s poetic dirt and roll around. “Dark Harbor XI,” whose text is centered on memories of fleeting happiness in the face of inevitable death, fit much more nicely with Fleming’s operatic persona; she does bittersweet beautifully, and she got to channel a bit of the Marschallin’s wistfulness here.

Her interpretation of Björk songs, however, was the real standout of the evening. It’s not exactly that the music allows her to show off her vocal mastery, though she sang it with plenty of Fleming-esque touches, including her fabulous pianissimo, but that suddenly Fleming’s face was simply glowing with happiness, her voice warm and serene in a way that it hadn’t been minutes before. I turned to my friend sitting next to me and said, “She looks so young all of a sudden,” as if she’d de-aged in front of our eyes.

Björk’s music is endless complex, full of wonder and pain, and draws from a massive palette of sonic textures. The two songs, “Virus” and “All is Full of Love” fit nicely with the rest of the program, bring together themes of sickness and decay present in The Strand Settings, connecting nicely with Ellen Reid’s piece by presenting a woman’s point of view that balances disorientation, love, and pain.

Fleming and company took the tempi rather briskly, particularly in “Virus,” which in Björk’s original recording has a kind of seductive languidness as it describes love as an invading force, turning oneself against oneself in a process of sweet self-destruction.

Hans Ek’s orchestration showed off the rich colors of Björk’s music, and the orchestra seemed equally infused with a quiet energy, bringing out a sparkling array of timbres in the short time they had with these pieces. My only complaint was that I wanted more; seven minutes is not enough to do justice either to Fleming’s clear love of the material and to Björk’s genius as a composer.

For a concert that billed itself as “Renée sings Björk, “it felt like a bit of a bait-and-switch to find that only about ten minutes of the whole concert, which was two and a half hours, was actually Renee singing Björk, while rest was devoted to Bruckner’s Fourth Symphony.

How did they choose this one? Were they worried that they’d gone over their woman composer limit for the night and they needed to make up with it for some big manly brass? That there was entirely too much singing in the first half and that we’d all forget we were at the NY Phil?

Not even an attempt at thematic connection was made to the first half, which I found an inventive bit of programming with its connections of sickness, love, and an interest in the personal, particularly the experiences of women, as well as the Scandinavian connection with Hillborg and Björk.

Instead, the program notes for the Bruckner returned to generic, straight-laced compositional history. It was nicely played, but felt boring and out of place after the surprising rawness of the first half. Compared to the shimmering colors and dangerous bite of Reid, Hillborg, Björk, it suddenly felt like they’d all picked up a duller palette to work with. The characteristic triplets sometimes felt a bit uneven, but it’s Bruckner, so they got a lot of chances to redeem themselves on that particular figure.

I’m making a big deal out of this because not because I have anything against Bruckner, but because I think it would be a much stronger statement from the NY Phil to have ended this concert differently. They could have picked something by a dead white guy with some kind of clear thematic through-line (maybe something else Scandinavian?).

Or they could have picked something by— just go with me here—a woman composer.

Or, perhaps strongest of all, they could have programmed the whole Strand Songs set and all of the Björk arrangements and then called it a night, secure in the fact that a concert at a major symphony orchestra can end with arrangements of “popular music.” Instead, it felt like they were trying too hard to pander to every kind of audience and ended up undermining the strength of the program as a whole.