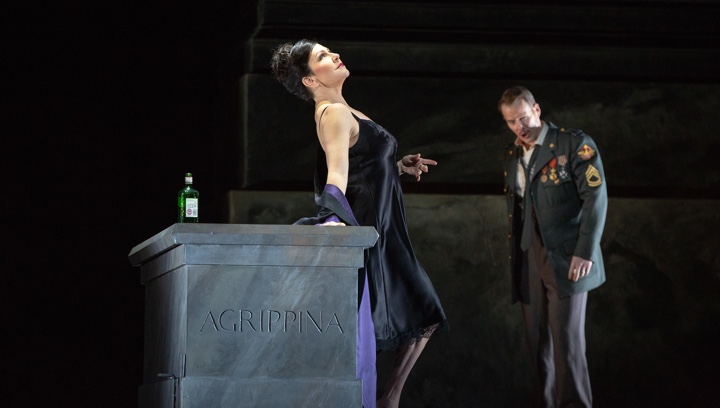 All opera-lovers are encouraged to attend and experience—probably for the first time–a young composer’s vivid first masterpiece which revolves around the all-consuming compulsion for power and sex. Attending with one’s eyes closed however is recommended to enjoy some fine music-making, particularly Joyce DiDonato’s fierce (if sometimes too fierce) empress and Harry Bicket’s stylish conducting.

Otherwise one will be assaulted by Sir David McVicar’s witless production, one so frantically desperate to entertain it turns out predictable and boring.

McVicar’s initial encounter with Agrippina occurred in Brussels during the previous century and was widely acclaimed as revelatory, one of the finest Handel productions seen in the modern era. As the original cast was preserved on video, one can easily discern how the Met in 2020 got a rejiggered coarsened version that turns something incisive and wicked into a broad, slapstick romp.

to a high school musical “showstopper” complete with back-up chorines, and, yes, Iestyn Davies was every bit as graceless as David Daniels in the clip from another recent revival.

Handel’s genius, which in Agrippina is brilliantly abetted by Vincenzo Grimaldi’s incisive libretto, is always to draw complex, intensely human characters, but for the most part McVicar is content to present a gaggle of shallow cardboard types. As the emperor Claudius prepares to sleep with his unwilling would-be mistress Poppea, he didn’t just disrobe (as he does in the 2000 video) but dove into a ripe Magic Mike striptease. Yes, it was greeted with raucous laughter, but what did it have to do with Agrippina?

McVicar was quite right to place in the modern day a work which investigates the corrupt dynasty running and ruining the Roman empire. This opera was never played in I, Claudius togas even in Handel’s day. But for all his pre-opening night discourse about how the piece remains stunningly relevant today about the abuses of those in power, there were precious few apt contemporary allusions other than giving Claudio a paunch, a long red tie and a golf cart. 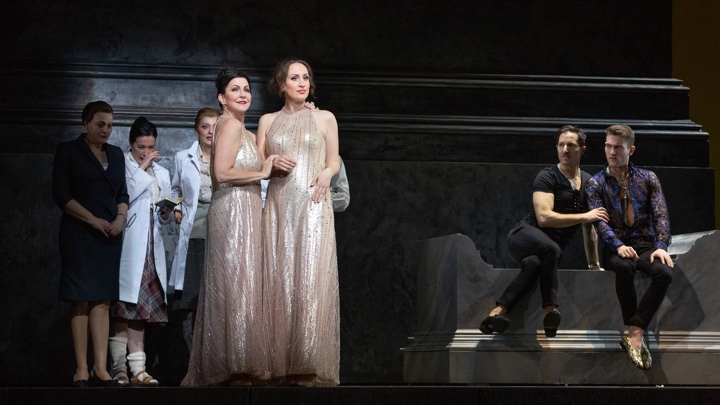 And all the other expected tropes are there: waving guns, smoking cigarettes, snorting cocaine, stomping around barefoot, swilling champagne, etc. etc. Though the opera revolves around Agrippina’s unstoppable quest to secure the throne for her son Nerone, it operates much more as a bedroom farce than as an exploration of political abuses.

One could only admire the all-out, fearless commitment the Met’s cast lavished on this strident update. Never before have I felt sympathy for a singer based on what she’s been asked to do on stage, but by the end of the first half of Agrippina, I wanted to commiserate with Kate Lindsey who gave one of the most bizarre, mannered performances I’ve ever seen. I imagine she was simply instructed to watch this video and crank it up a hundred-fold.

Her tatted-up, on-the-spectrum Nerone consisted of twitching and slouching and little else that resembled human behavior.

One’s relief that the role hadn’t been cast with a countertenor was quickly dissipated by Lindsey’s second aria where she alarmingly belted straight tone. After intermission she settled down to some pleasing singing especially in “Quando invita” but all told hers was an intensely off-putting portrayal.

At the opposite extreme was Davies’s irredeemably bland Ottone. The military man who rescues Claudio and then is quickly chosen his successor only to be betrayed by all around him is the one truly good and moral figure. His mournful lament “Voi che udite” prefaced by a wrenching accompagnato becomes the work’s emotional center; its placement just before intermission should have made a powerful impact but Davies’s correct but wan rendition fell flat. Otherwise his sizable but colorless countertenor got the notes out with efficiency but little expressiveness.

He demonstrated remarkably little chemistry with his lover Poppea played by Brenda Rae as a silly sex-kitten in her eagerly anticipated Met debut. Would that Rae’s voice was as voluptuous as her regularly revealed curves. Though she dispatched Poppea’s hundreds of sixteenth-notes with enviable agility, her soprano consistently felt a size or two too small for the house. 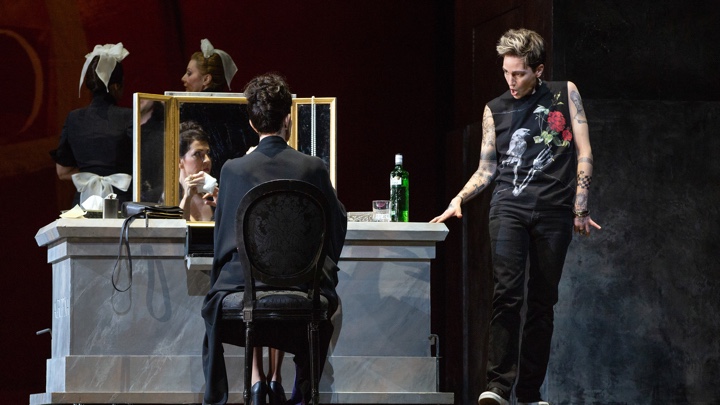 Those vocal acrobatics were inexplicably increased by the spectacularly ill-considered decision to substitute an epic, endless bravura aria “Per punir che in m’hà ingannata” for Poppea’s brief, pithy “Ingannata.” “Per punir” which was added after Agrippina’s opening presumably to appease the role’s originator, features two extravagantly extended harpsichord cadenzas played with brio onstage by Bradley Brookshire but who was so heavily miked he produced sounds resembling machine-gun fire. Rae inevitably brought down the house but the aria’s inclusion took the opera perilously off-message.

In smaller roles Duncan Rock sounded light for Pallante but he carried out with aplomb his mildly amusing Mutt-and-Jeff routines with Nicholas Tamagna’s nervous-nelly Narciso. The American countertenor’s intensity and heartfelt singing for his Met debut made me wish he’d been singing Ottone instead of Narciso. Christian Zaremba did much with little as the unfortunately named Lesbo.

The royal couple in power fared best of all: Matthew Rose towered over everyone and managed to retain some shreds of dignity despite the crass business he had to carry out. His warm round true bass coped admirably with the extremes of Claudio’s arias but all in all he made somewhat less of an impact than an emperor should. 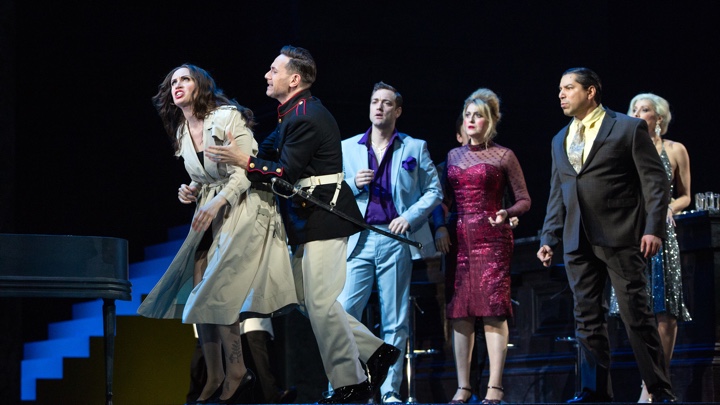 That may have occurred because his wife played by DiDonato was such a dominating figure. Yes, the opera is named Agrippina and the mezzo was clearly the raison d’être for this new production. She wheedled, seduced, cajoled, inveigled with a pro’s effortless flair. A practiced Handelian, her command of the florid writing impressed as much as her pungent delivery of yards and yards of recitative.

While she was often awesomely impressive, one occasionally wanted moments a bit less full-throttle, a bit more nuanced. Added ornamentation for all throughout was unpredictable but DiDonato’s in particular sometimes verged on the shouty and unfortunately the irresistibly infectious and waltzy “Ogni vento” collapsed in s shambles of awkward decorations.

But when DiDonato stepped off the gas pedal, the effect could be magical as in her intimate game-saver “Se vuoi pace” to Claudio. She also brought the evening to a dazzling conclusion by absconding with the oft-omitted aria for the goddess Giunone.

As both the Met and Carnegie believe it’s impossible to present a Handel opera without Bicket conducting, over the years one has grown used to his considerable strengths and occasional weaknesses. In this instance he had one of his most satisfying outings in memory. From the first notes of the opera’s intensely propulsive overture, Bicket had the Met orchestra playing like baroque was second nature to them.

Though occasionally tempi verged on the over-brisk, his reading tautly revealed the striking rhythmic waves yet also caressed those few welcome instances of repose. One hopes this welcome vigor will continue on to next season’s rumored Giulio Cesare although the prospect of Davies in the title role already has me shaking my head.

Big-house Handel almost inevitably involves making allowances given that early 18th century opera was never meant to be performed in a 4000-seat theater. On a purely musical level, the Met’s new Agrippina does a pretty decent job for Handel although the cuts to keep the running time to around three-and-a-half hours made a muddle of the third act.

Many attendeesThursday evening appeared to be having a good time and hearty laughs were regularly heard but McVicar’s nth iteration of the opera lessens its stinging effect considerably in favor of cheap, crowd-pandering antics. While one is grateful to have such a terrific work finally at the Met in 2020, one wishes that it had gotten the chance in its 1998 guise instead.

In an exciting confluence that doesn’t happen much these days, a week ago Erato released an exceptional studio recording of Agrippina featuring DiDonato. This 3-CD release is absolutely complete running 3 hours and 50 minutes…

…and features two appendices including the melting duet for Poppea and Ottone that was also performed at the Met.

DiDonato is finer and subtler, a major, important interpretation. A singer previously unknown to be, Elsa Benoit, is a fluent charming Poppea and while he lacks Rose’s deep bass Luca Pisaroni captures Claudio’s pomposity well. In the smaller roles, Andrea Mastroni, Carlo Vistoli and Biagio Pizzuti do their homeland proud. Marie-Nicole Lemieux, however, is a plummy flop as Giunone.

My primary reservations involve the two other countertenors: Franco Fagioli is miscast (as are nearly every countertenor as Nerone) sounding strained and unsteady and sometimes just downright unpleasant.

Jakub Josef Orlinski is a more complicated case; his singing throughout is poised and agile but too often one feels he’s just in over his head. Ottone lacks stature and heart—similar to the qualms I have about Orlinski’s new solo CD “Facce d’Amore” in which he presents newly rediscovered pieces mixed with well-known Handel arias including Ottone’s great lament.

Particularly in items like the mad scene from Orlando one feels like they’ve been recorded too soon—seasoning needed, a boy sent to do a man’s work.

Besides DiDonato’s imperial villain, the glory of the new Agrippina is its vibrant orchestra Il Pomo d’Oro under Maxim Emelyanychev’s exciting direction. This is truly outstanding Handel playing and it makes one eager to hear them collaborate with DiDonato in May at Carnegie Hall.