A special program note for Saturday night’s performance of Matthew Aucoin’s new opera Eurydice pointed to a rare convergence of three MacArthur Grant fellows in its creation and staging. 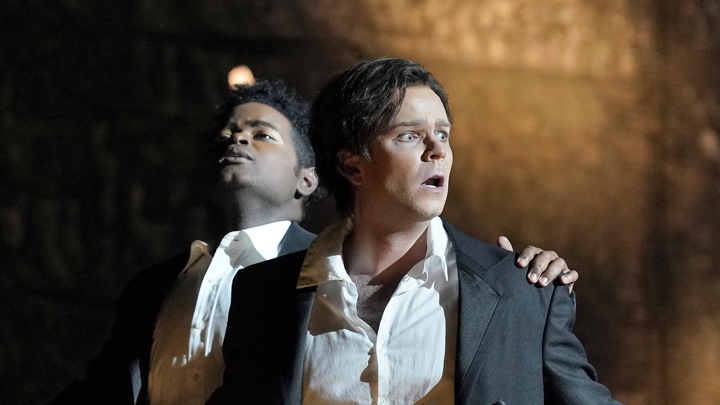 Now that the Music Center Plaza is running at full bore, escalators have supplemented grander staircases and plates are flying at multiple dining venues (where before we barely had two) LA Opera thought it was high time they indulged itself with a world premiere of a new work. A special program note for Saturday night’s performance of Matthew Aucoin’s new opera Eurydice pointed to a rare convergence of three MacArthur Grant fellows in its creation and staging.

Started in 1981, the MacArthur Grant program rewards those with, “”extraordinary originality and dedication in their creative pursuits and a marked capacity for self-direction” with over half a million dollars paid out over five years. Applications are not accepted and the nominations process is anonymous and confidential.

Looking over the list of recipients show a very wide range of people involved in the sciences and the arts. Included are playwright Mary Zimmerman in 1998 who is our director, playwright Sarah Ruhl in 2006, who fashioned the libretto from her own 2003 play and Composer / Conductor Matthew Aucoin who was just recently acknowledged in 2018. To say expectations were running high would I think be a might restrained.

The pre-game lecture in the Grand Hall (I think one of the best things about LA Opera) was actually an interview with Ms. Ruhl and Mr. Aucoin. Both of whom proved insightful and modest. Ms. Ruhl spoke to her personal inspirations that allowed her to reform the Orpheus myth from the viewpoint of its female participant and Mr. Aucoin demonstrated some of his musical themes and figures on a waiting grand piano. I believe he is just 30 and appears, in spite of his half-shaven beard, even younger in person. Attendance was standing room only.

Ms. Ruhl’s play, which I read in anticipation of Saturday premiere, easily straddles the classical mythos with modern prose that finds its poetry in both its word play and structure. She knows the eloquence of simplicity and uses it with an uncommon effect. Her words are eminently singable and frankly already looked to me like lyrics on the page.

The opera opens on the beach the day that Orpheus proposes marriage to Eurydice. A wedding party follows quickly on from which she is lured away by none other than Hades in disguise who causes her death. Reunited in the Underworld with her father, who has managed to retain his memory and language in spite of it being forbidden, he slowly brings her back to a human consciousness. 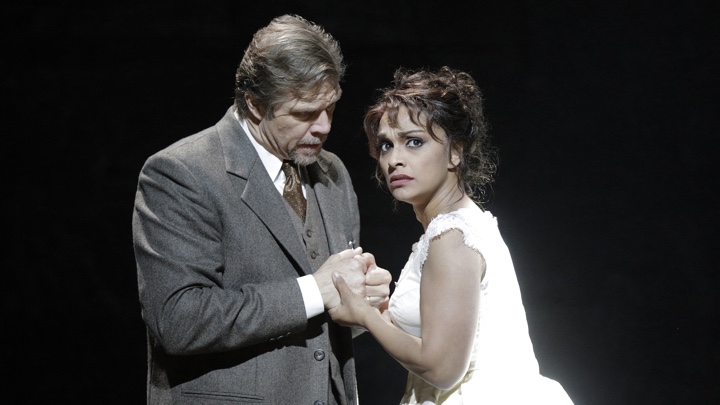 She is then torn between reuniting with Orpheus when he appears at the gates to bring her back or staying with the father she loved and missed. The themes touch on how much an artist can really give of themselves to even their closest partners and, of course, loss and grief on many levels.

The scene at the beach immediately plunged the audience into Mr. Aucoin’s titanic, flowing score. The pulsing strings and woodwinds in collaboration in the opening scene evoked the power of the ocean and the sea birds. Later darkened horns and skittish timpani introduce the Underworld. The orchestrations are surprisingly dense at times and delight the ear in their inventions.

There’s a careful line in modern music between making a score accessible to an audience of music lovers while not necessarily presenting them with a series of musical math equations. On this point he has succeeded. Naturally Mr. Aucoin hasn’t been raised in a vacuum and I counted a great many influences perhaps the strongest of which was John Adams. Still he easily managed to find his own musical language for his characters, most importantly for Eurydice, Orpheus, and Hades.

Orpheus, written for baritone, is actually given a countertenor half-self “double” for emphasis at times. Mr. Aucoin spoke at the pre-game of writing their music in an octave-fifth combination based on the sound of a mimic’d organ pedal stop in some Bach piano transcriptions. This seemed at first to be absurdly over-complicated but in fact worked astonishingly well.

There is also a chorus of three Stones in the Underworld and if I’m allowed one charge I would have liked something more individual in their writing. They seemed to blend too easily into the background at times especially since much of their banter was meant for comedic effect.

Still the sheer size of the orchestral sound was at times daunting and almost seemed too much for the delicate feelings being expressed in spite of the story’s mythic origins. Yet I must admit that the singers were never once overpowered by the orchestra and were all given proper support from the pit. The LA Opera Orchestra played with the kind of precision that only comes from real skill and a good conductor at the helm. The Chorus, banished to backstage, made an especially strong contribution as well when called upon. 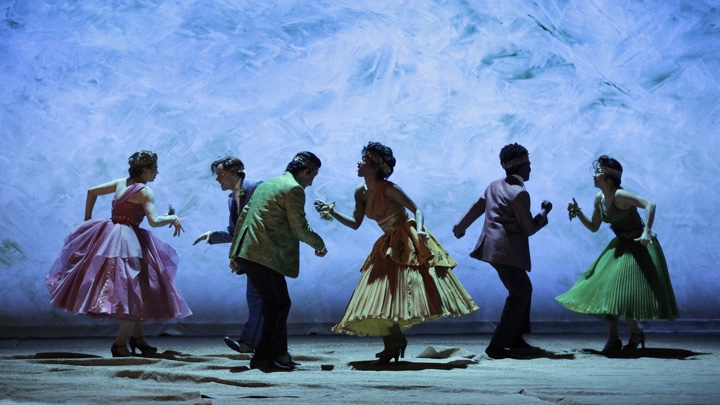 Our Eurydice, Danielle de Niese, actually made her LA Opera debut at the tender age of 15 and was asked back in 2002 for Lauretta in Gianni Schicchi. My first encounter with Ms. de Niese was in recital at the Broad Stage in my hometown of Santa Monica almost a decade ago. She closed the first half with an extraordinary rendition of Edward Grieg’s Haugtussa song cycle. Especially evocative in the last piece “At Gaejtle Brook” which was so potent I, barely familiar with the text, saw her standing on tiptoe with a stream rushing about her. I have carried this performance with me as a talisman ever since.

There were rumors that Ms. de Niese was ill for the dress rehearsal and speculation as to whether she’d sing the prima. No formal announcement was made and she did not need the audiences indulgence. She gave a strong performance filled with vocal detail and word pointing.

She was fluid and exquisite in her movements onstage and took responsibility and care to the task of connecting this new work to its audience. She had two great set pieces at the end of each of the two acts. The first being, ““This is what it is to love an artist. The moon is always rising above your house “ which was filled with a tender yearning. Her last, when she writes a letter to Orpheus’ next wife was a heartbreak.

As The Father, baritone Rod Gilfry, whom the program pointed out made his LA Opera debut in the role of Herald in that first opening night Otello in 1986, made a splendid impression. Having created the role of Walt Whitman in Mr. Aucoin’s Crossing singer and composer are familiar with each other and it showed. His opening scene where he’s writing to Eurydice on her wedding day set the stage later for his bitter sacrifice at losing his daughter a second time. His singing throughout was even, his words easy, and he imbued the vocal line with a lush resonance befitting his character.

The estimable bel canto tenor Barry Banks as Hades deserves some sort of award for singing this treacherous role. Intentionally written in the upper quadrant of the voice to make the King of the Underworld seem unearthly and menacing Mr. Banks made easy work of some very strenuous writing. His final appearance, on stilts no less, in his full demonic glory subtly set the stage for the horror that was to come.

Joshua Hopkins as Orpheus was tasked with the job of sounding absolutely glorious in everything he did. In this he was abetted by the composer who made certain his vocal lines were suffused with poetry. He rang out effortlessly over the orchestra and was singularly touching in his appeal at the Gates of Hell in Latin.

His Double was countertenor John Holiday who displayed a fresh sound that melded with Mr. Hopkins seamlessly which was surely the intention.

The Three Stones, soprano Stacey Tappin, mezzo Raehann Bryce-Davis and tenor Kevin Ray made the most of their parts as the Greek Chorus. Intermittently scolding, prophesying, and jesting about the fate of those concerned. Their best trick was when tears of little rocks, hit the stage when they spoke of how moved they were by Orpheus’ plight.

Special praise goes to the deceptively simple set designs of Daniel Ostling. The use of a lightly billowing vertical strip of blue fabric in the opening scene representing the ocean was inspired. As well the tableau that slowly revealed a field of gladiolus beyond the opening gates as Orpheus and Eurydice made their escape from the Underworld was extraordinary. He was ably supported by the lighting designs of T.J. Gerkins whose use of shade and sunlight made especially clear which plane the story was taking place on.

The costumes of Ana Kuzmanic where by turn stylish for Ms.de Neise with her bright magenta traveling coat and her white wedding dress underneath whose hem got increasingly dirtier as the evening went on. Then maniacal and hellish (in all the right ways) for the denizens of the Underworld.

The direction of Ms. Zimmerman kept everything moving forward and always gave the audience a sense of time and space. SInce things were happening on different planes of consciousness simultaneously this was particularly daunting but always clear. The staging of the final scene, which in the hands of someone of lesser gifts could seem enigmatic, was a total devastation.

The second Act is short compared to the first (which really comprises two acts played together) but the break is planned for the best dramatic effect and the work played just over two and a half hours last night with intermission.

The audience applauded Mr. Aucoin and Ms. de Niese and the rest of the creative team heartily Saturday night and as this is a co-production with the Metropolitan in New York I’m certain it will continue to grow on its journey there. A great evening of music and theatre and an excellent beginning for all concerned. Five more performances remain through February 23rd and it deserves to be seen and experienced.