Ultimately, the unrelenting grimness of the subject matter allied to the sameness of the vocal writing made for a wearying evening. 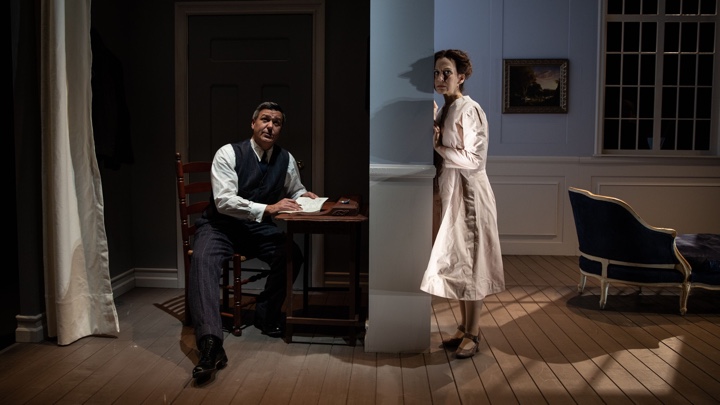 Bleak mid-January brings the heady Prototype Festival (now in its eighth season) throughout New York City and one of its most anticipated events this year was Ellen West, a new work by Ricky Ian Gordon, seen Wednesday at the Gelsey Kirkland Arts Center in Dumbo. Despite the best efforts of its participants, especially a riveting performance by Jennifer Zetlan in the title role, this grimly earnest one-act tackling severe anorexia and gender dysphoria remained stubbornly uninvolving.

Ellen West’s libretto derives from a poem published in the early 1980s by Frank Bidart based on a Swiss case study from the early 1920s by Dr. Ludwig Binswanger. “Ellen” was the pseudonym of a hospital patient in extreme distress caused by her horror at her own sex and body. Bidart’s work consists of a dramatic monologue in Ellen’s voice interwoven with medical dispatches from the doctor reporting on his ineffectual attempts at treatment which ended in her release and subsequent suicide.

Gordon follows Bidart’s model in that there is virtually no interaction between Ellen and the Doctor (and two other male characters) played by baritone Nathan Gunn. The 80-minute opera thus consists almost entirely of alternating harshly jagged soliloquies that culminate in the briefest of duets during the work’s final moments. While effectively conveying the doctor’s helplessness against the baffling diseases devastating his patient, this bifurcation made for an impersonal and static theatrical experience.

Ellen and the doctor occasionally circled each other in the doctor’s office half of Laura Jellinek’s spare set but never directly addressed each other. In an effort to animate the opera, Emma Griffin’s production introduced two silent characters dressed as nurses who occasionally mime patient-care activities toward Ellen but more often writhe about in an effort (one presumes) to mirror the heroine’s paroxysms.

The most cogent of their actions included Maria Phelan scarfing down what looked to be ham or prosciutto and later she and Carlo Antonio Villanueva madly peeled oranges. While those moments served as somewhat effective visual counterpoints to Ellen’s anguished recollections. otherwise the pair’s periodic spasms merely distracted one’s attention from Zetlan and Gunn.

Gordon’s music by and large consists of spiky heightened recitative which foregrounds the wordy text; the excellently clear diction of both performers allowed most of the words to come through without having to continually glance at the titles. Ultimately though, the unrelenting grimness of the subject matter allied to the sameness of the vocal writing made for a wearying evening.

The somber yet often eloquent accompaniment, conducted by Lidiya Yankovskaya, was provided by the Aeolus Quartet abetted by bass Evan Premo and pianist Djordje Nesic. Unfortunately the most telling pages of the opera were a surging instrumental interlude in the midst of one of Ellen’s long anecdotes.

Though sympathetically delivered by Gunn, the doctor’s shambling interjections stayed resolutely prosaic brimming with uncomfortable information about laxatives and diarrhea. His rich baritone retains some of its instantly identifiable glamour but occasional high-lying passages revealed a good deal of strain. He spent a lot of time changing clothes—putting on a jacket or vest, donning a hat, etc.—presumably to differentiate his first character—“Poet/Frank”—from Dr. Binswanger and eventually Ellen’s non-speaking husband.

Zetlan, gifted with the infinitely more compelling character, worked tirelessly—in motion nearly throughout taking on and off a bundle of identical pale shifts while delivering searing recollections of her lifelong terror of being fat…and female. The role’s often demandingly high tessitura initially challenged Zetlan but as the evening wore on her high notes rang out more freely though sometimes marred by the maddening amplification.

The petite soprano, who created the role at the opera’s world premiere last summer at the Saratoga Festival, elicited enormous sympathy for Ellen, sometimes in spite of her character’s haunted stories. While there was an arresting narrative about a train ride that vividly recounted her tortured attraction-repulsion to a piece of fruit, her long rumination about her fevered self-identification with Maria Callas’s dramatic weight loss (complete with Tosca quotations in the orchestra) proved cringeworthy, especially her climactic cry of “the tapeworm was her soul.”

Also, the inclusion of her recollection about attending a Callas Tosca muddied the time frame—when exactly was this all taking place? The real “Ellen” died in Europe in 1921, yet her fantasia on Callas’s decline suggested it might be the 1970s?

Both pieces brought to mind something that had nagged at me during Ellen West. While I may not subscribe to all aspects of “identity politics,” I did wonder throughout the performance what a female composer and librettist might have made of Ellen’s tragedy. Were two gay men really the ideal artists to tell her story; particularly jarring were that almost campy Callas misfire and the emphasis on the male doctor’s bumbling. I imagined a work half as long focused just on Ellen housed in a simpler, more pointed production. But this Ellen West occasionally pierced the heart—thanks to Zetlan.

The complete original Bidart poem (it’s been rearranged and added to for the opera) is available online.