I’m only now coming up for air after a night spent wading in the deep, cool, refractory waters of Magdalene, a work of immense, mythic joy and pain wrapped in the details of the ordinary. 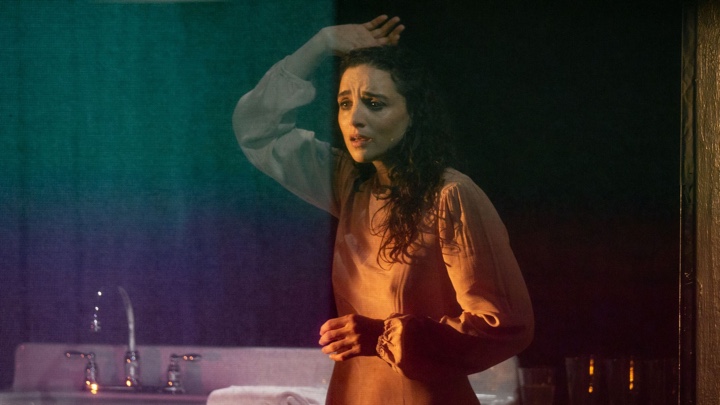 Magdalene stars the mesmerizing Danielle Birrittella, who co-created the piece, as well as composed a movement. She is the only one who sings, but she is never alone onstage, always paired with, haunted by her double, dancer Ariana Daub, all dressed in a red version of Birrittella’s pale pink gown. The two women push and pull each other, sometimes battling, other times caressing, and in a striking moment, become an all-female Pietá, Daub’s naked form stretched across Birrittella’s lap.

Much takes place behind a scrim, Birrittella’s expressive, almost-ageless face seen only darkly at times, sometimes behind projections, her body briefly becoming the screen; other times she appears in warm washes of candlelight. She packs dishes, climbs on tables, writhes in pleasure, wanders through her house at night looking for something—what?

The rest is out front in a reflecting pool that spans the stage, light cast on it such that every step by M. or her red-robed double threw ripples of light onto the scrim, that stunning, crystalline vision that sanctifies grottos, a sight at once familiar and startlingly new. Each of their steps made soft splashes, another instrument that whispered under the strings and harp. Reader, I gasped— it was that beautiful.

Birrittella a is truly not to be missed in this role; her sweet, clear, conversational voice nearly disguising the skill and power behind it. She makes singing look as easy as breathing, as talking, and every line was delivered with subtlety, grace, and clear dramatic intention.

She is as hypnotic to watch as she is to hear, her face registering every tiny flicker of emotion, her spare form moving with warmth and dignity, even when the choreography veered a bit on the weird side. Ariana Daub’s dancer is an excellent pairing, Daub (who also choreographed the show) bringing a hint of the malevolent as well as the seductive. There is substantial nudity in this show, but Daub kept it from being titillating, instead showing both the power and the vulnerability of her body.

No fewer than fourteen composers collaborated to create this piece, writing for string quartet and harp, performed with brilliant, frisson-inducing expression by the Desdemona Quartet and Sonia Bize on the harp.

Here is the list, because you should look them all up if you don’t know them:

This feels groundbreaking, still, in 2020, a collaboration of 14 female composers, in a show created, written, directed, conducted, choreographed, sung, danced, and played by women. It is also a feat of musical ingenuity, for, though each movement brought with it its composer’s distinct voice, the whole show felt complete, fully realized, and rounded instead of piecemeal or choppy.

Again, I come back to the word refraction, not only because light and water were so fundamental to the visual elements of this show, but also for the way refractions break up images, shedding light on different sides, presenting different facets. Each composer gave up a gleaming sliver of the Magdalene to us, distinct but also part of a whole.

The music was, across the board, excellent, full of shimmering colors, power, and beauty. My particular favorites were Christina Courtin’s desire-soaked, thrumming ostinato topped with swirling harps and strings in a movement titled “Low Tide, Late August,” ending with the striking image of two bodies intertwined but looking in opposite directions, Gyda Valtysdóttir’s “Two Animals,” all mysterious, sinister descents in the harp, punctuated by ghostly shivers from the bridges of the strings, a waking dream (or nightmare) of an early morning encounter of coming upon one’s double in the darkened hall. Tanner Porter’s wry, snaky aria in which M. sings about all the different penises she’s encountered, (“One penis was so friendly I was never afraid of it. One was so slender I was startled. One was blunt and short like a little pig”), full of humor, sex, and danger in shifting proportions, and (I hope) to become standard audition repertoire ASAP. (Hello, I’m Gabrielle and I will be singing the Penis Aria from Magdalene.) Danielle Birrittella’s “The Teacher,” and finally, Emma O’Halloran’s bittersweet finale, both full of longing and joy.

Marie Howe’s libretto is revelatory, full of desire and wonder, feeling both biblical and modern at the same time, deeply personal and also touching on something shared, something out-of-time. Each movement changes format, a series of brilliant visions of all the Magdalenes, the one who Catholics know as the companion of Jesus, a former prostitute turned saint, perhaps the lover or even wife of Christ, and the nameless ones who followed her.

The final movement begins, “Remember the woman in the blue burka forced to kneel in the stadium then shot in the head? That was me. And I was the woman who secretly filmed it.” What follows is a litany of Magdalenes from across time and space. Yes, I’ve heard things like this before, a “we are all the Magdalene,” a vision of shared womanhood, but that didn’t matter, because after what came before it, it felt earned instead of overdone.

Magdalene is a hopeful vision for what opera can be and do in the twenty-first century, and a compelling reason for the continued support of women artists, especially women opera composers, and encouragement that collaborative projects like these can create a work of singular power, beauty, and relevance.