I watched Greta Gerwig’s heartbreaking, gorgeous, joy-filled explosion of an adaptation of Little Women in about the best way one can, sniffling in the dark with my best friend, the closest person I have to a sister. 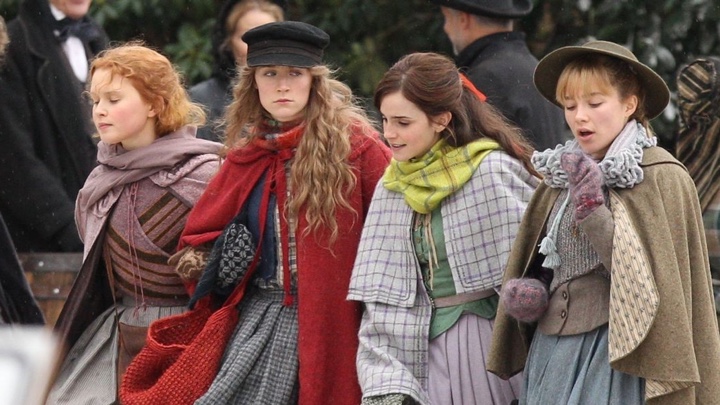 I watched it again with my mom, whose (often harshly) critical eye has shaped my own in immeasurable ways, who taught me to have opinions and to stick up for them. So, after much weeping, I tried to find out what this story meant and means to me and why.

Maybe it’s because this story about four young women learning how to be good people after the American Civil War feels as timeless today as when I first read it at eight, the superficial primness, the Victorian ideas about gender giving way to real emotions, often ones that are anything but nice.

Maybe because I’ve known these little women all my life, and continue to know them in myself in new ways every year as I get older. Jo, tomboyish, tough, loving, and independent, Amy, beautiful, uncompromising, with a taste for finery and an all-or-nothing attitude towards success, Meg, who sacrifices material comfort for love, and Beth, who found richness in a quiet life and knew when to let go, even if her sisters didn’t.

Maybe because I still feel starved of stories about women, their relationships with each other, with themselves, with their passions and their anger-especially their anger-and their joys. The ways they hurt each other and hold each other up. It’s something I often don’t see in opera and have learned to find in other mediums instead; the novels, films, and television shows that have shaped my life are almost all about women learning how to be in this world.

The stories women have in opera are still limited, so often because they’re created and composed by men. Any scrap of female friendship and love feels like a feast, but one that always leaves you hungry after it’s done.

I’m hard pressed to think of many scenes in the operatic canon that would pass the all-too-famous Bechdel test, in which two named female characters talk about anything but a man. (Dialogue of the Carmelites? Suor Angelica? Is the convent the only option to get some female relationships?).

The new operas I’ve seen in the last year more consistently centered women, but often presented them alone, instead of placing them within a network of women, family members, lovers, or friends. The imperfection of the Bechdel test aside, it’s worth rethinking the place of women’s relationships with each other in operas as we enter a new decade of opera-going and opera-loving.

Even Mark Adamo’s setting of Little Women, with its refrain of “things change” (this change brought about by the entrance of men into the sisters’ little world) is not quite enough for me, even though that final quartet is a favorite of mine. Adamo isn’t wrong; men do change the lives of the sisters, and their eventual pairing off is a satisfying and necessary conclusion to their stories.

This is where I would love to hear an operatic version of Little Women by a female librettist and composer; not because Adamo does something wrong, but because different perspectives pull different threads from their source material. Adamo teases out the way the sisters’ lives are changed by growing up and their eventual romantic partners, and centers the emotional core around this idea of the way lives and relationships change. Gerwig focuses on female ambition, anger, creative talent, and ways in women artists are constrained by the society they live in.

Little Women contains a series of love stories, Laurie and Jo, Laurie and Amy, Jo and her writing, but for me, the finest, richest one that Gerwig brings is between Jo and Amy, two sisters alike in talent and ambition and unalike in disposition. Each is the other’s worst critic, their competitor in artistic merit, and also, in the end, come to be each other’s supporter, despite years of hurts small and large.

Amy gets to go to Europe with Aunt March; Laurie loves Jo first; Amy gives up her painting when she marries Laurie, Jo keeps her writing and finds her own match in Friedrich Bhaer. Amy rejects Laurie, saying, “I have been second to Jo my whole life.” She doesn’t want to be the one Laurie settles on because he cannot have her sister. When Amy does marry Laurie, Jo feels a pang of hurt and jealousy; she’d just decided to accept him if he asked again.

And, in my favorite moment of the film, the sisters look at one another, Amy clearly terrified that Jo will be angry with her, Jo trying desperately to be happy for the couple, tamping down yet another disappointment, another moment where she feels Amy has taken something from her. Florence Pugh’s face held it all within one expectant look, her mouth turning down at the edges into the little fierce grimace that defines the adult Amy; just how much Amy loves and admires her older sister, even as Jo makes her feel small, silly, inadequate.

And it’s Amy who says dissents when Jo proclaims her novel unimportant.

JO: Who will be interested in a story of domestic struggles and joys? It doesn’t have any real importance.

AMY: Maybe we don’t see those things as important because people don’t write about them.

JO: No, writing doesn’t confer importance, it reflects it.

AMY: I’m not sure. Perhaps writing will make them more important.

Earlier in the film, Jo’s eventual husband Friederich Bhaer asks her “Don’t you have anyone to take you seriously? To talk about your work?” It’s clear that he means himself; he respects her mind, part of why he is a better match for Jo than Laurie. But, clever Gerwig, Bhaer can only say “I don’t like them,” and very little else; it’s Amy, the other artist in the family, with whom Jo can talk about her work, who can change her way of thinking about the purpose of writing. And Jo, finally, is able to see that her little sister is wiser than she thought.

Alcott, in the book, presents a rather bittersweet view of women’s ambitions; all four start off as artistic: Beth plays the piano, Meg acts, Amy paints, Jo writes. By the end, all four have given up or sidelined their passions; Beth, beset by terrible shyness in life, dies young, Meg trades her childhood dreams in for domestic life.

Amy learns a hard lesson; “talent is not genius, and no amount of work will make it so,” and Jo, while never giving up on the idea of writing a novel, lays this aside to work at her beloved school for boys. But Gerwig’s adaptation sees beyond what Alcott and Adamo could, finding the strength and wisdom in Amy, taking her from hated bratty sister to tough, intelligent, and mature, and making a new ending for Jo, who publishes her hard-earned novel and ends the movie clutching it to her.

This is a female creator’s read on another female creator, a hopeful look for a world where Jo writes her novel, runs her school, and loves her Professor at the same time, but also one that recognizes the limitations on this dream both in the nineteenth century and now. (Gerwig was snubbed for the Best Director nom at the Oscars) Gerwig also leaves Jo’s story somewhat ambiguous, the framing implying that her movie-moment with Professor Bhaer might be all for the book. (Alcott also famously changed the ending at her publisher’s request). The final frame is just the Jo and her story, the most important relationship Jo has.

When I started thinking about why I so rarely see stories like this in opera, I came up against a wall; thinking that perhaps there’s something inherently un-operatic about all this, and that’s why I see it so rarely. A story about female friendships and sisterhood, one without any high drama, only the little rages and joys felt so intensely in everyday lives; what’s the need for singing about that? And so, I inadvertently fell into Jo’s trap, thinking perhaps that opera reflects, instead of conferring, importance. Luckily, Amy was there in my head to remind me otherwise.

In between when I started this essay and when I’m ending it, I saw Prototype Opera Festival’s premiere of Magdalene, a chamber opera that explored Mary Magdalene as both a modern woman and a biblical figure, and in my review for it here, I cite that what I liked so much about it was its ability to find the mythic within the mundane, and the way it felt to see something almost entirely created and performed by women (amazing and bittersweet).

I felt a lot of hope that night for opera’s future, its ability to tell what may seem like small stories in a big way. This, after all, is what made Alcott’s book so powerful in the first place, the way it finds drama in the ordinary, and what makes Gerwig’s film such an accomplishment now. I still want more from opera because I believe it has the potential to explore relationships between women from a female perspective in a way that can tell new stories, finding new Jos, Amys, Beths and Megs for audiences to see themselves, their friends, their sisters in, and that it has the ability to make these stories important.