The moon and I

Composer Garrett Fisher and librettist Ellen McLaughlin’s Blood Moon wears its themes on its sleeve to great success in this spellbinding new opera. 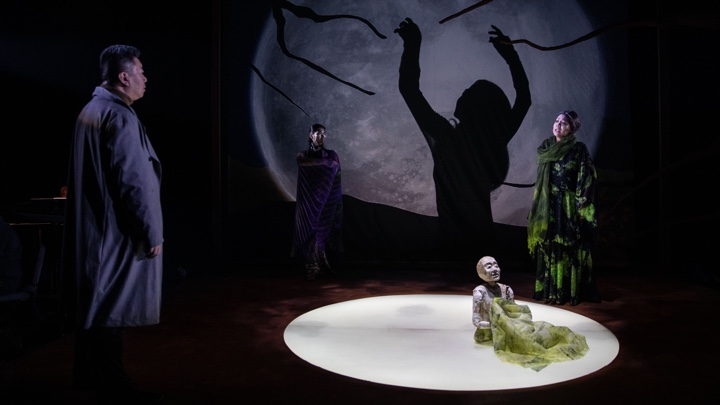 The story is simple: On a moon-soaked night exactly 40 years before the opera’s setting, an unnamed nephew climbed a mountain with his unnamed aunt, the woman who raised him and his only living relative. There he abandoned her to die in the cold glow of the moon. Now, 40 years later, he returns, now the same age as his aunt when he left her there, wanting to confront her ghost and atone.

Why did he leave her? What does he want from her now, now that his regrets have tightened like ropes around him, pulling him back to the mountain where, it becomes clear, he also abandoned himself as well as her all those years ago? In its best moments, Blood Moon is a startling meditation on the selfishness of children, the unknowability of parents by their offspring, the treatment of the elderly, and the way grief and guilt shape our lives.

The Aunt sings, “What did you ever know of me, except what relates to yourself?’ How much can we ever know our parents? When do they become flawed, fascinating, complete human beings to us instead of hazy reflections of ourselves and our needs? For the Nephew, it is only when he is an old man himself, too late to ever make up for the cruelty and selfishness of his youth. And yet still he wants more from his Aunt. He wants her forgiveness, her blessing to keep living somehow, and she, in spite of her anger, dies once again for him. It’s strong stuff, beautifully realized and compellingly performed.

Fisher’s score was a triumph, combining western and eastern instruments to stunning effect, finding delicate emotional shading within the perfectly-realized dark and threatening ambiance. He struck a balance between tuneful tonality and dissonance. The instrumentation was truly thrilling, with shimmery flutes (both western and Japanese) layered over harmonium, ominous percussion, and lyrical writing for cello. Fisher’s writing for voice was fluid and subtle, with striking snippets. that stuck with me as I rode subway home.

McLaughlin’s libretto was slightly more uneven, with lines of pared-down beauty occasionally followed with moments that struck me as a bit-on-the-nose, a little too much exposition that briefly detracted from the emotional heft of the story. However, these were only moments; this is a fascinating plot for an opera, with plenty of richly human dialogue that brought a few necessary jagged edges to a story of smoothly mythic proportions.

The creative design was also particularly excellent; Susan Zeeman Rogers’s set made the most of small space, bringing a sense of claustrophobic dread, the bright unfeeling moon (done through effective use of projections) trapping the characters in a slow, ritual sacrifice, something alien and primal all at once.

I also found the use of a papier-mâché Noh puppet, designed by Erik Sanko manned by dancer Takemi Kitamura, to be a startlingly beautiful representation of Aunt, looking in turns like her desiccated corpse (but in an artsy way) and like her trapped spirit, its paper mouth open in anguish.

Having two Aunts, one flesh-and-blood and one paper, made it impossible to forget her cold, lonely death, and also made it clear that even now, the Nephew is only able to see his Aunt through his own cracked gaze; whether she appears as she once did when he was young or as the frightening, frightened ghost that remains it left ambiguous.

Director Rachel Dickstein had a bit of an uphill battle, given that the libretto is almost entirely exposition, and this left the blocking feeling repetitive: lots of outstretched anguished hands from across the stage, some parking and barking, and Chen’s Moon was apparently told to slither sexily/threateningly in the background for the whole show when he wasn’t singing. This proved a little too campy for the seriousness of the plot, veering occasionally into unintentional comedy, but again, these are small complaints.

The singing was, overall quite good, marred only by what seemed to be opening-night over-singing from everyone. Countertenor Ju-eh/Juecheng Chen appeared first as the Moon, dressed in a sequin gown with floaty diaphanous sleeves, face painted silver with craggy moon texture overtop. Chen’s voice is exceptionally powerful, cutting and severe, with a brash, fiery gleam to the top.

His Moon was harsh and threatening with a side of seductive, a powerful mysterious force, indifferent to the lives of men. This worked beautifully when Fisher’s score allowed for brashness, but there were a few quiet moments that could have been taken down a notch vocally to provide some contrast.

Nina Yoshida Nelsen brought amazing dramatic presence to the evening as the Aunt, shifting seamlessly between rage, tenderness, indignation, and finally, generosity, a final sacrifice of herself for her beloved nephew who hurt her so deeply and whom she loved so much.

Her voice, like Chen’s, was all raw power, a massive, metallic sound that threatened to lose control at any second. I tend to like voices like this; there’s something thrilling to me about a dangerous voice, especially when they’re combined with Neslen’s skill as an actress. It made it easy to overlook a few moments where it did lose control, coming out too strident on top or feeling a bit pinched. Who can blame her? If I got left on a mountain to die alone, I bet my high notes would be a bit weird, too.

The night belonged to bass Wei Wu, however, whose impeccable control, sensitive interpretation and gasp-inducing low notes (Such presence! Such color!), imbued the libretto with subtlety and emotional depth. Wu mostly avoided the over-singing trap, providing the dynamic contrast needed to keep the Nephew from coming off as total psychopath.

He has lines about how he convinced himself that leaving his aunt to die was actually a mercy, a kindness, letting death descend like sleep upon her. In Wu’s hands these lines were both chilling and pathetic, the Nephew—while never pardoned for his sin— seeming more sad and misguided then evil.

In the end we never really know why he left his Aunt there under the cold moon, just like we cannot know truly know her except what she chooses to reveal. Perhaps that’s the scariest truth of all.