Faces in the crowd 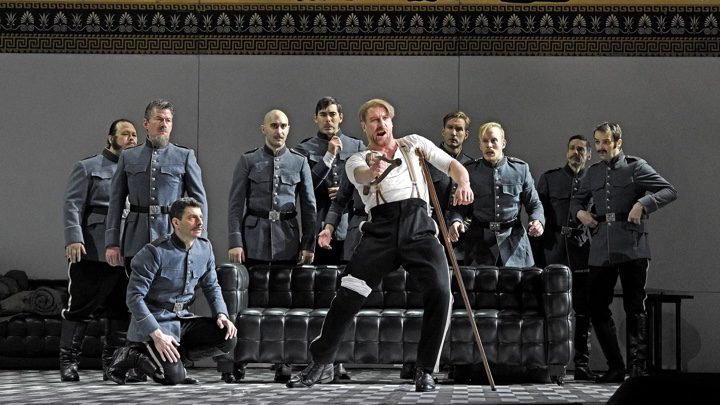 Carsen’s staging is at its best energetic and innovative. The updated setting, which moves the action of the opera into the same 1911 in which it debuted, reintroduces Strauss’s and von Hofmannsthal’s masterpiece as a modernist work concerned with many of the existential anxieties common to literature of the period; the aristocracy is declining, social organization fraying, self-identities becoming angst-ridden and alienated.

For the opera singer inclined towards actually acting, the production, with its robust blocking and emphasis on romantic chemistry, provides ample opportunity to do more than, as is the case in many more traditional Rosenkavaliers, stand around looking gilded and/or naughty.

Saturday’s cast was, thankfully, inclined to act. Angela Brower, in her Met debut, played a dynamic, youthful Octavian, believably teenaged from his flatfooted ardor with the Marschallin to the self-assurance he must fight to summon when confronting Ochs in act two. In the commotion following Och’s wounding (he quite literally runs into Octavian’s sword), Brower’s Octavian seemed flabbergasted — shoulders up around her ears in a baffled shrug, looking beseechingly around the stage for a friendly face — and very, very young.

Vocally, Brower offered similar youth and dynamism, with a full bottom register and a blossoming, bright top. Hers is not the most enormous voice, but especially in those higher registers she has some real power and shine.

Brower was well matched for youth and beauty in Golda Schultz’s Sophie. Carsen’s blocking gives Sophie a fair amount of feisty zipping about to do, and Schultz seemed to bring an extra layer of nervous jitters to the role, coupled with, of course, a soprano voice as shimmering and silver as the glittering rose presented to her in act two.

Unfortunately, not all of the Met’s audience seemed to know what they were in for. At the first intermission, the woman behind me was insisting to her date that Octavian is “usually a man’s role, of course,” written for a tenor, and lord only knows why “this production” has chosen to change it. When we returned to our seats, they were experiencing a rude awakening on the Wikipedia page. At the end of the second intermission, they were, mercifully, gone.

Of the trio of women, the least theatrically engaging was Katie Van Kooten as the Marschallin, who sang with power and feeling, but who seemed curiously distant from all of the stage business, whether clambering awkwardly into an on-the-floor makeout with Octavian (my fellow opera goers around me audibly grumbled at this one, which I will admit threw me. Why buy a ticket to Der Rosenkavalier if you don’t want to see women kiss?) or gliding awkwardly through a brothel.

Just before the final trio, Schultz’s nervy Sophie is so visibly cowed by the stern distance of Van Kooten’s Marschallin that you can practically see her praying the floor will open up and swallow her — not an unreasonable dynamic for this particular moment, but certainly undercut by the fact that for the previous three acts Van Kooten has not been doing much besides sternly distant.

Günther Groissböck’s virile young Ochs has been thoroughly lionized by more qualified (read: nonlesbian) reviewers than I; to their gushing I will only add that his acting is every bit as forceful as it was when the production debuted, but his voice is more constricted now than it was then, with the role’s lowest notes clearly sitting well out of his comfort zone.

Gareth Morrell’s conducting was a little underwhelming given the rave reviews Rattle has been getting for this run — there were moments where singers and orchestra did not feel precisely on the same page, and moments when the gruff Ochs material seemed to stretch interminably.

The leads were supported by a host of talented smaller roles — Markus Eiche as a scene-stealing Faninal, Thomas Ebenstein and Katharine Goeldner as particularly charming Italian gossip mongers, Matthew Polenzani as an ultra-hammy Italian singer — but they were also undermined by Carsen’s production’s tendency towards the unrelentingly busy.

Particularly in the oddly shaped sets, which present cavernous rooms bisected and reoriented so that the audience is looking into a series of enormous corners, this relentless cramming of supers and dancers and chorus members onto the stage makes for some regrettably clogged stage pictures.

In the same vein is the lighting, by Peter Van Praet and Carsen himself, which flips from neon blue to sodium lamp yellow and back again to punctuate seemingly any and all emotional beats. Devices like these are distracting, and — worse — condescending, implying that the audience will not be able to infer on their own that, for example, Ochs is boorish without a soccer team’s worth of men pantomiming boorishness behind him, or that Sophie and Octavian have fallen in love without the lights suddenly flashing blue and a whole ballroom dancing class pirouetting behind them.

Carsen has given his singers so much rich material to work with; it’s a shame he can’t always trust in their brilliance, or in his audience’s ability to connect.