You better sit down kids 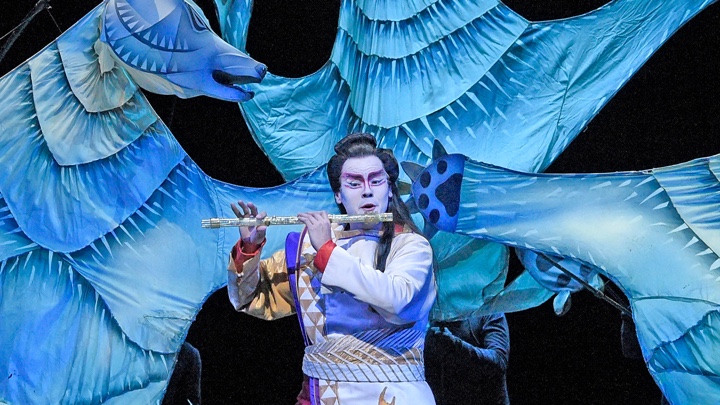 It has always baffled me that The Magic Flute is considered appropriate for children: on top of all the sexual assault, violence, racism, misogyny, and occultism, the opera seems to teach its viewers about the dangers of trusting one’s mother and the merits of joining a cult.

The fact that we are willing to embrace this fraught Singspiel as a fairytale for the whole family speaks more about our own anxieties around the future of opera than it does about the child-friendliness of Mozart’s work: if this gnostic Masonic farce were not so canonical, I doubt that we would still consider it a family parable.

Julie Taymor’s production for the Met, designed specifically as a family holiday production, does its best to mitigate the worst excesses of Mozart’s opera by adorning it with color and spectacle (and between the revolving plexiglass set, dancing bear puppets, and hieroglyphic light show, one could almost forget about the dark undercurrents of the plot). Similarly, J.D. McClatchy’s English translation rids Schikaneder’s libretto of all its misogynistic one-liners, and Monostatos, thankfully, is not presented as a racist stereotype.

However, it became clear at Sunday afternoon’s performance that this production does not go far enough in addressing the more disquieting features of the opera’s plot: Monostatos still attempted to rape Pamina (and was still flogged as a punishment); Papageno was still presented as a lonely alcoholic (and still attempted to hang himself out of desperation); and Pamina was still pressured into submitting to a mysterious, male-dominated “brotherhood” who seem to trade women like commodities.

To top this all off, Taymor’s production harbors a number of unfortunate resonances: the high priests’ conical hats were uncomfortably redolent of the KKK, and the headdresses worn by the women of Sarastro’s cult were all too reminiscent of The Handmaid’s Tale. What’s more, Taymor’s production capitalizes on the latent orientalism of Mozart’s opera, and frequently exacerbates it in a way that seems out of touch with our more socially conscious Zeitgeist (the same “othering” gaze plagues her now iconic Lion King production).

Of course, many of the more problematic aspects of Taymor’s production would have gone well over the heads of the children in the audience. However, judging from the countless youngsters shifting restlessly in their chairs at Sunday’s performance, there was one aspect of Taymor’s production that did not escape their notice: just how utterly boring it could be. 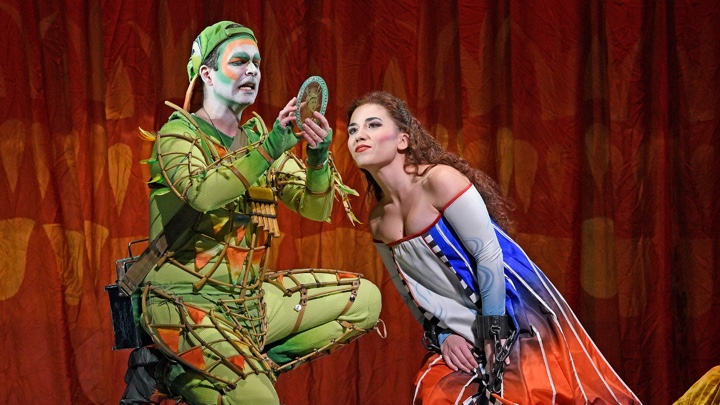 Indeed, Taymor’s production sacrifices emotional urgency in favor of pageant and puppetry, leaving the opera’s narrative feeling somewhat cold and listless. A prime example of this comes in the opening number: Taymor’s decision to stage the three Ladies as floating puppet heads only muted their conflict over Tamino’s unconscious body, stifling the overall affect of the scene and undermining Mozart’s vibrant musical characterizations.

Although this production employed an abridged version of Mozart’s score (cut down to 100 minutes with no intermission), the opera still dragged, and I couldn’t help but wish that they had shaved another half hour off its duration. The cuts themselves were partly to blame: McClatchy chose to keep Mozart’s sprawling recitatives (along with the large bulk of the trial music), while excising a number of more tuneful (and more endearing) numbers (“Bei Männern”, for example, was a great loss).

McClatchy’s libretto didn’t seem to go far enough in adapting the opera’s libretto for young and contemporary audience, weighed down with Enlightenment grandiloquence and glaring archaisms. McClatchy seemed to resort to clunky and unidiomatic grammatical constructions in order to fit his words to Mozart’s music, remaining true to the meaning of the original text but rendering his verse haughty and cumbersome in the process.

Let’s face it, Schikaneder was no Goethe, and McClatchy might have done better throwing out the German libretto altogether; a clean slate might have provided him the opportunity to write something original and genuinely funny, rather than laboring to make Schikaneder’s eighteenth-century gags land in contemporary English.

The uneven pacing of Sunday’s performance was not entirely the fault of Taymor and McClatchy: with a few exceptions, the cast appeared ill at ease in the dialogue, which was, for the most part, delivered in dry, stilted monotone. Singers who had no trouble animating and projecting their sung passages were often difficult to hear in their spoken lines, which could come across as mechanical or unnatural.

Unintelligibility was an overarching issue with this cast, and much of the sung text would have been entirely incomprehensible without the aid of the supertitles. This was particularly evident in the lighter voices, which seemed more preoccupied with filling the acoustic than with articulating the text. Confusingly, the surtitles occasionally did not match the delivered text, which further confounded efforts to follow the translation (I eventually switched my supertitles to German – much less disconcerting). 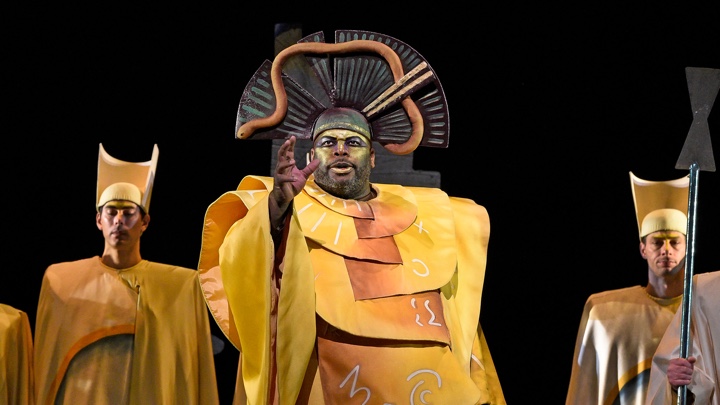 A major exception to the cast’s poor articulation was Joshua Hopkins, whose Papageno was a clear crowd favorite and a breath of fresh air in an otherwise dreary performance. Whether speaking or singing, Hopkins balanced a warm, rounded tone with crisp declamation and energetic delivery to create a Papageno who was both ceaselessly engaging and musically gratifying.

If his “Der Vogelfänger bin ich ja” (I will use German titles for convenience) failed to gather momentum between verses, his duet with Papagena (the zippy-voiced Ashley Emmerson) was full of vocal thrills and physical athleticism. At one point, Hopkins flossed (the 2019 dance move, not the dental procedure) to the sound of the magic bells, drawing many laughs from the younger members of the audience, and offering a vision for how contemporary and relevant this holiday production might have been, if only the Met were willing to forgo the drab timelessness of Taymor’s production.

Hopkins found a dramatic equal in Rodell Rosel, whose Monostatos was played with clarity and humor. All of Monostatos’ music makes the cut in this production, which allowed Rosel plenty of opportunity to flex his comprimario chops, showing off a particularly resonant lower register and incisive high notes. Both Hopkins and Rosel were skilled actors, demonstrating impeccable comic timing; the few scenes they shared were among the only genuinely funny moments in the opera.

Kathryn Lewek’s Queen of the Night was one of the musical highlights of the performance, molding her “O zitt’re nicht” into a dramatic tour de force with a range of tasteful vocal colors and a nuanced sense of Mozartian line. Her stratospheric coloratura in “Der Hölle Rache” was a tad harsh (although judging by the bouts of spontaneous applause, well received by the opera’s young audience), but impeccably tuned and seamlessly integrated with bright middle-voice passages.

David Portillo’s Tamino was physically stiff and dramatically leaden; he suffered the most in the opera’s dialogue, never quite commanding the kind of heroic gravitas the role demands. Portillo fared better vocally, his bracing, metallic tenor lending plenty of fervor to the recitatives.

If Portillo’s performance did not provide much timbral variety, the blame lay mostly with the cuts to the opera, which saw him singing odd bits and bobs from Mozart’s score; nonetheless, the one verse of “Dies Bildnis ist berzaubernd schön” that Portillo did sing might have benefitted from a sweeter tone and more lyrical phrasing. 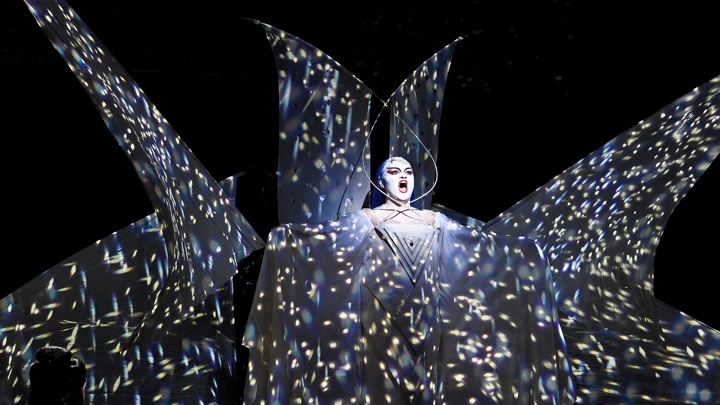 Joélle Harvey lacked dramatic conviction in her Met debut as Pamina, wooden and awkward in the ensembles and inaudible during the dialogue. Vocally, her performance was a mixed bag: the vibrato was often unpredictable and led to tuning issues early in the opera, aggravated by an uneven tone in the middle register. Harvey seemed to ease into the role, however, and her “Ach, ich fühl’s” revealed a more relaxed, more expressive sound, undermined only by a lack of emotional drive.

Morris Robinson’s lackadaisical Sarastro greatly contributed to the lethargic pace of Sunday’s performance, devoid of the charisma and paternal warmth the role demands. Both “In diesen heilgen Hallen” and “O Isis und Osiris” saw Mozart’s radiant, hymn-like melodies delivered as plodding dirges, stripped of all musical interest. Robinson’s low notes were more vocal fry than actual tone and were often drowned out by the orchestra, while his upper register could sound swallowed at times.

The three Ladies (Gabriella Reyes, Megan Esther Grey, and Renée Tatum) experienced a number of coordination issues in the early ensembles and their sound never quite reached a smooth blend over the course of the opera. Their dialogue, which saw sentences split between the three characters, lacked the quickfire dynamism necessary to build up dramatic velocity at the opera’s outset.

The Knaben (David Katzman, Eliot Flowers, and N. Casey Schopflocher) fared better, delivering their numbers with precision despite being suspended many feet above the stage.

Lothar Koenig’s conducting was, for the most part, rather humdrum, finding little color in one of Mozart’s most kaleidoscopic scores: stylistic contrasts were played down and tempi sat incessantly (and dully) in the middle of the road. Koenig frequently failed to synchronize orchestra, chorus, and soloists – at one point, the offstage chorus were a beat and a half ahead of the orchestra, an egregious bungle in what should have been a relatively straightforward passage.

If Sunday’s performance demonstrated one thing, it is that opera targeted at children must be just as good as (if not better than) opera targeted at adults: for many young audience members on Sunday afternoon, The Magic Flute would have been their first encounter with opera, and they deserved much better than a half-baked performance of an increasingly irrelevant production.