A place in the sun

Friday evening’s Met premiere of Akhnaten was a resounding triumph and an outstanding testament to Philip Glass’s enduring operatic vision. 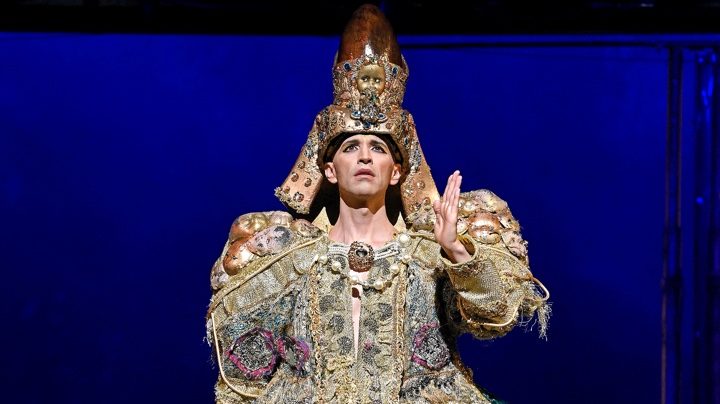 It seems a travesty that Philip Glass’ Akhnaten, one of the seminal works of the 20th century by one of America’s most iconic composers, is only just receiving its Met premiere in 2019, some 35 years after its first performance.

It was gratifying, therefore, that Friday evening’s premiere was such a resounding triumph, a sumptuous feast for the eyes and ears and an outstanding testament to Philip Glass’s enduring operatic vision.

Between Phelim McDermott’s jaw-dropping production, Karen Kamensek’s incisive conducting, and a cast who triumphed despite the occasional rough patch, Akhnaten was at once invigorating, hypnotic, breathtaking, and (surprisingly) moving.

Indeed, despite the opera’s near-four-hour duration (and perpetual musical repetitions), this performance was endlessly engrossing: each act felt like one long trance, every slow-motion movement and swirling arpeggio as gripping and enchanting as the next.

The pharaoh Akhnaten was but a tiny blip on history’s radar, ruling Egypt for a mere 17 years. Yet, he has been attributed with many important historical developments, most notably the establishment of the first monotheistic religion (which some anthropologists have linked to the birth of the Abrahamic religions).

His fleeting reign has also been subject to much speculation and intrigue. Was Akhnaten sleeping with his own mother? Did his wife, Nefertiti, succeed him after his death? And why was his body depicted in such an eccentric manner by contemporaneous sculptors? 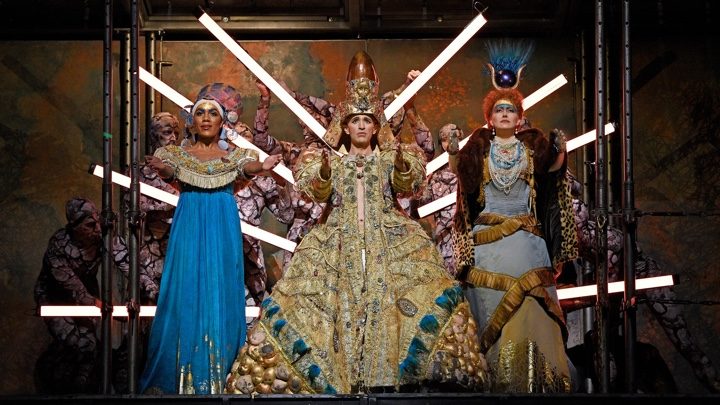 Akhnaten is, therefore, a complex historical figure, requiring an equally complex portrayal in Glass’ opera. Fortunately, Anthony Roth Costanzo’s raw yet sophisticated performance painted a vivid portrait of the pharaoh, which came to a gut-wrenching head in the opera’s third act.

He captured the pathos of a ruler so rapt with religious fervor, so devoted to his wife and family, and yet so deeply out of touch with his people. It was a sympathetic portrayal, warm and intimate, yet imbued with a captivating intensity.

Even in Akhnaten’s long periods of silence and stillness (it is almost 20 minutes before we first hear the pharaoh sing), Costanzo held the stage with a spellbinding poise, never failing to draw the eye. The pharaoh’s rise and fall was so sensitively sketched by him, that when Akhnaten was eventually killed, and his new city razed to the ground, it was difficult not to shed a tear for the deposed ruler.

This is all despite some less-than-flawless singing from the countertenor. His low register often failed to sound, and when it did, it often sounded constricted. His middle register was warm and resonant, yet often came across as nasal or pushed, while his upper register was marred by a wide, wayward vibrato.

Those of us who were introduced to this opera through the 1987 Dennis Russell Davies recording have become accustomed to the pureness of tone and evenness of register which Paul Esswood brought to the opera’s title role. By contrast, Costanzo’s Akhnaten could sound a tad harsh, and perhaps over-articulated, especially in the louder sections, which only exacerbated his vocal quirks.

This performance has received much media attention in recent weeks: the hype has centered around the opera’s coronation scene, in which Costanzo appears onstage naked (a scene he allegedly prepared for by canvassing gym buffs on Grindr for workout tips). Much sensationalized, this press coverage gives the impression that his performance might be bawdy or overly sexualized. 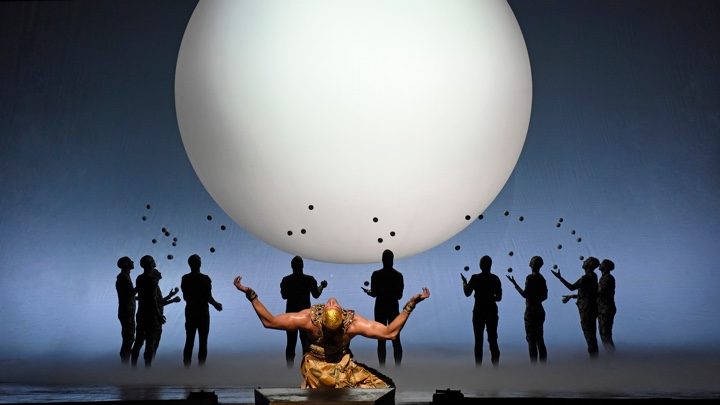 In fact, the much-touted nude scene was the very opposite. It was tender, exposed, vulnerable, jarring with the spectacle and grandeur of the coronation festivities. The singer carried this vulnerability throughout his performance, and it was precisely this vulnerability, this rawness, that allowed him to transcend his rougher vocal qualities.

Costanzo used the coarse, jagged corners of his voice to his dramatic advantage, making them a part of his characterization, a means of exposing the fraught emotional currents hidden beneath the pharaoh’s regal composure.

The result was, against all odds, something of a tour de force. It gave rise to the surprising paradox whereby Akhnaten’s “Hymn to the Sun” was the most vocally precarious scene in the opera, yet somehow also the most moving. From his opening pianissimo straight-tone to his fervid invocations of sun-drenched fertility, the hymn tugged incessantly on the heartstrings.

Costanzo was at his best when singing in conjunction with mezzo-soprano J’Nai Bridges, in her Met debut as Akhnaten’s wife, Nefertiti. Akhnaten and Nefertiti’s second-act love duet is the emotional core of Glass’ opera, with its interweaving vocal lines and sensuous dissonances; here it was the perfect showcase for Bridges’ exquisite musicality and rich vocal tone.

Bridges navigated the twisting counterpoint of the duet with a smooth messa di voce, bringing a gentle glow to the rare moments when Nefertiti’s line reaches above Akhnaten’s. In the third act, Bridges’ voice took on a haunting edge, particularly in the scene with Akhnaten’s six daughters (a tight and gorgeously blended ensemble of Lindsay Ohse, Karen Chia-Ling Ho, Chrystal E. Williams, Annie Rosen, Olivia Vote, and Suzanne Hendrix), Bridges rounding out the group’s sound with fullness and depth.

Dísella Lárusdóttir, taking on the role of Akhnaten’s mother, formed the perfect counterpart to Bridges’ Nefertiti, with a bright, clear sound and plenty of pep to boot. Her voice had an ethereal quality to it, particularly when floating above the lower, more full-bodied voices of Costanzo and Bridges. 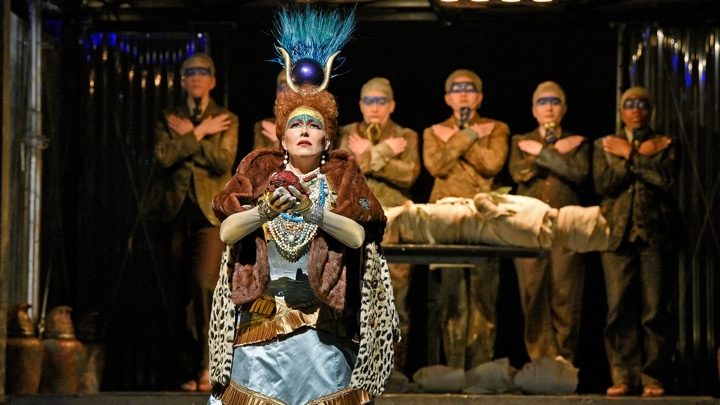 Richard Bernstein, Aaron Blake, and Will Liverman (as Nefertiti’s father, the High Priest, and General Horemhab respectively) also made for a vibrant trio, particularly in the third act, where they lead the charge against Akhnaten and his monotheistic regime.

Bernstein was particularly impressive in the first act, his sonorous baritone cutting through all the pomp and circumstance of Ancient Egyptian ritual. Blake was similarly imposing in the second act’s temple scene, throwing his stentorian cries of “Amen” across the chorus of priests with a bold, luminous tone.

An unexpected star turn came from Zachary James, who threatened to steal the show in the speaking role of Akhnaten’s father. James declaimed his various expositional monologues with Shakespearean gravitas – all power and presence – lending a force and an urgency to the narrative.

The dramatic weight of his delivery was matched with an excellent physical command of the stage, every broad, deliberate gesture carried out with an unwavering sense of authority.

All of this was, of course, underpinned by Karen Kamensek’s musical direction, which offered a lively, nuanced vision of Glass’ score. In general, Kamensek, who made her Met debut in this performance, favored a clean, even orchestral blend over timbral contrast.

However, she was not afraid to draw out distinct orchestral colors, to arresting effect: the muted trumpets in the epilogue, for example, seemed to snarl at the ghostly apparitions of Akhnaten and his consort, while the fortissimo flurry of woodwinds in the opening funeral scene added a hard edge to the proceedings.

Kamensek led a tight, snappy performance, coordinating pin-point accuracy between stage and orchestra (if cracks did begin to show in the metrical pitfalls of the “Attack and Fall” scene, this only contributed to the general furor of the drama). The Met Chorus were especially remarkable in their musical precision, especially in the heart-stopping offstage chorale which ends the second act, a ravishing reminder of the strength of the Chorus’ choral chops.

Then there is McDermott’s production – an outstanding directorial achievement. McDermott will be well known to New York audiences for his landmark production of Glass’ Satyagraha at the Met in 2008, which garnered considerable critical acclaim. In Akhnaten, McDermott took this frozen-in-time aesthetic and added a hefty dose of unabashed opulence.

Production designer Tom Pye’s scaffold set – replete with clinical plastic doors and bare metal piping – opened up to reveal a gold-leafed throne room, or a giant pair of scales (weighed down with canopic jars), or a topographical map of Akhnaten’s ruined city, or (most grand of all) an enormous radiant orb representing the sun god, Aten.

Pye’s set made the perfect backdrop for Kevin Pollard’s luxuriant costumes, which took on a timeless aesthetic, at once Egyptian, Edwardian, and Elizabethan. Akhnaten’s coronation outfit, for example, was more Gloriana than Aida, a golden neme accenting an outsized brocade hooped dress. Meanwhile, top hats, fur stoles, evening gloves, pantaloons, and bustles abounded (alongside all the animal headdresses and gossamer fabrics of the archaic setting), hinting at a kind of eternal majesty.

McDermott’s staging did not shy away from flashy pageantry, and there were many scenes in Akhnaten that could rival any Zeffirelli production for their wow-factor. Yet McDermott’s production also had a certain intimacy: slow-motion movements would culminate in tableaux vivants radiating out from some form of close physical contact.

The heart and soul of McDermott’s production was the Skills Ensemble, a kind of omnipresent dance troupe who functioned as the animating force behind the onstage action. The Met’s marketing team has had a field day selling this production on the various juggling acts performed by this ensemble, as if the production were some kind of gawdy circus act.

Yet the juggling was more than a mere marketing gimmick. This promotional material failed to capture the dramatic expressivity of the juggling, so deeply enmeshed in the psychological fabric of the opera. Cutting across the glacial pace of the stage action, the juggling became a key way for McDermott (and choreographer Sean Gandini) to create affect or atmosphere, undercutting the stillness with a constant sense of dynamism

Akhnaten is a co-production with LA Opera and the ENO. Such partnerships are becoming increasingly common across the opera industry as companies seek to spread the rising costs of new productions. Akhnaten suggests that such trans-Atlantic partnerships can be enormously fruitful ventures, bringing fresh creative voices to the Met’s stage, providing space for bold, innovative operatic visions.