Zauberland: An Encounter with Schumann’s Dichterliebe touched on themes of forced migration, loss, exile, and dehumanization. 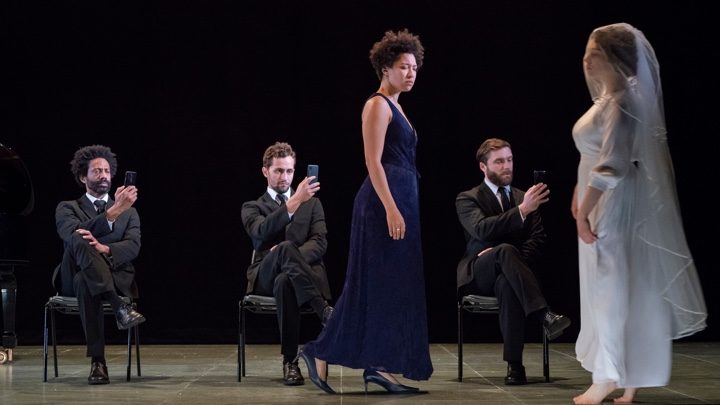 Tuesday night marked the New York premiere of Zauberland: An Encounter with Schumann’s Dichterliebe, an expanded and staged version of the song cycle that touched on themes of forced migration, loss, exile, and dehumanization.

Composer Bernard Foccroulle has inserted 19 new songs in the cracks of Schumann’s original sixteen, taking the cuts made by Schumann (Dichterliebe originally contained 20 songs) before the cycle’s publication as invitations to intervene.

After all, as Foccroulle writes in the program, “Exile is at the heart of Zauberland; wasn’t it also—in a metaphorical sense—in Dichterliebe?” Martin Crimp provides the text, a poetic stream of images that were sometimes evocative, sometimes on-the-nose, interspersing his own story of an unnamed Syrian refugee (apparently also, the program noted, a professional opera singer, though this was not clear from the staging) who travels, pregnant and alone, to Cologne while facing the dehumanizing vicissitudes both epic and banal of forced migration.

In practice, this meant, two short insertions of Foccroulle’s /Crimp’s between “Wenn ich in deine Augen seh’” and “Ich will meine Seele tauchen,” and again after “Am leuchtenden Sommermorgen,” with the remaining seventeen new songs coming after the end of the Dichterliebe portion.

The story as such, is loose and hazily sketched full of time-jumping signified by about a million (okay, maybe 25) costume changes, in which Julia Bullock’s unnamed central character was violently undressed and redressed by a quartet of black-clad actors ( Ben Clifford, Natasha Kafka, David Rawlins, and Raphael Zari)) who morphed seamlessly and silently into various characters, from the central character’s lover to her child, from gun-toting policemen, to gang-rapists and murderers.

Bullock herself was left only to react to them, protectively shielding her body, singing while blindfolded at one point, crouched on beds and tables, and while having her clothes and shoes ripped off nearly every two minutes. We know very little at the beginning, only that her lover is dead. His body, covered in a white sheet stained with blood, is rolled on- and off-stage several times, a bit of blocking which got repetitive as we went along, but was haunting and beautiful the first few times. 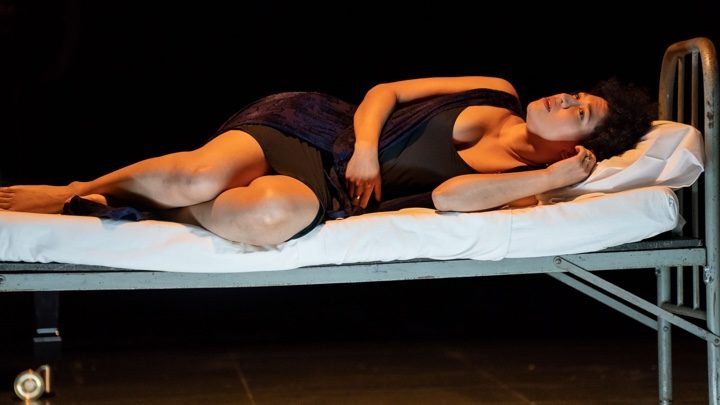 We later find out that our unnamed woman has a child, and that she escapes her war-torn home to come to Germany. It’s obliquely implied that she is learning Dichterliebe, with the black-clad actors occasionally handing her a score before snatching it away again.

The first half, which contained all of the Schumann, was entrancing; Schumann’s searing, glorious music was intercut with images of extreme violence, including a very disturbing scene of a bride being burned while suit-clad men record it on their phones. (Crimp’s commentary on men becomes more obvious as the piece goes on, unfortunately to the detriment of the piece overall).

The whole show took place in a hazy dream world, sometimes beautiful but mostly ominous, in which certain images from Heine’s poetry were picked up and made flesh—the cypress branch in “Allnächtlich in Träume” is given to Bullock by the burned bride, who plucks it from a nearby bush before it disappears and Bullock is transported suddenly back into bed.

The second half, which was all Foccroulle and Crimp, was slightly more frustrating, if only because by this point we had seen a lot of these tricks before, and they were beginning to lose their emotional impact upon repetition.

Foccroulle’s music is not always particularly memorable, but he smartly centers his songs around a central leitmotif a little post-tonal melody that could represent the dreamland, or the central character’s incessant memories. He also writes well for the voice, giving Bullock plenty of opportunities to shine, and drawing upon a large enough palette of timbres and a good understanding of vocal ranges to keep his half from becoming boring.

This is an ambitious project, one which could easily flop altogether, and while I found it adequately thought-provoking and well-performed to overcome the strangeness of its premise and the occasional dramatic and lyric misstep, for some of the audience members around me this was a no-go. 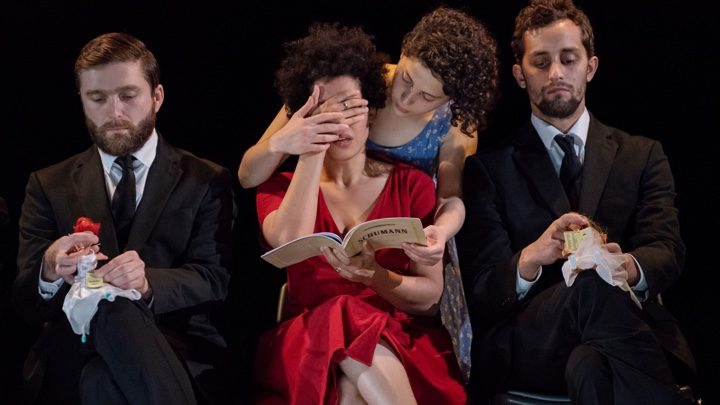 One woman near me referred to it as “insulting,” though whether to Schumann or to victims of forced migration, I couldn’t tell. The juxtaposition of Heine’s text and Crimp’s is not always a natural one, with the male-gendered standpoint of Dichterliebe interacting strangely at times with the onstage action or with Crimp’s interjections.

Bullock is singing to a female lover in the Schumann/Heine but her lover in Crimp/Foccroulle’s re-imagining is male, which wouldn’t have been a problem except that there was another female character onstage, a woman in a wedding dress who become many things, a sort of palimpsest of various impression who appeared throughout, mirroring Bullock herself, acting more general stand-in for women who exist in countries under violent, misogynist regimes, or even becoming a sort of life-size doll, and,in other moments, taking on the role of Bullock’s daughter while donning a flowery dress.

It left a few questions about which characters were real and which were dreams or hallucinations. Things like this happened fairly often and caused a bit of confusion, as did the strange mismatch of the central character’s grief at the death of her lover, heavily implied to have been the result of a bombing attack, and Heine’s bitter, often misogynistic anger at the betrayal of young men by capricious women. It was evocative enough, however, if you just accepted the lyrical and tonal differences as part of the dream-world.

The entire show is carried by Bullock and pianist Cédric Tiberghien, who, together, provided single most convincing argument for this premise. Bullock, who seems to be known for her interpretation of contemporary music, was moving, sincere, and understated throughout.

Her voice is not perfectly suited for Dichterliebe, which has too few passages above the passagio to let Bullock’s spinning, wheeling high notes fly free, but Bullock had the expressive chops to overcome this issue, making me lean in, ever so slightly, to hear her perfect diction.

Her performance in the second half with Foccroulle’s music made it clear why she’s sought after to sing contemporary music. Her voice, suddenly removed from mezzo middle-voice land, bloomed and flourished, suddenly full of sparkling colors.

She has the rare gift of making complex post-tonal music sound utterly effortless and completely natural, no more difficult than singing a lullaby to a child. Massive leaps, sudden low notes, a harmonic language that sometimes gave little to hold on to; all of these were putty in her pliant, supple voice.

Bullock is also a truly gifted actress, imbuing her character with dignity, pathos, and strength, even as she endures endless abuse at the hands of the men in black suits. As for the piano, Tiberghien played beautifully throughout, but really shone in the Schumann portion of the evening.

I’ve always felt that Schumann had a special way of putting the emotional core of his lieder in the piano play-outs (think of the incredible last bars of “An meinem Herzen, an meiner Brust” from Frauenliebe, with its dancing outro, the feeling of spinning around and dizzily landing in soft grass, laughing with glee: to me, a truly perfect three bars), and Tiberghien’s instincts were simply spot on in every one of those moments.

The finals bars of “Wenn ich in deinen Augen seh,” with those luscious suspensions and lowering range, brought me to tears in Tiberghien’s hands, and his extraordinarily sensitive “Am leuchtenden Sommermorgen” was a high point for me.

Katie Mitchell’s tight, imaginative stage direction kept everything flowing smoothly, but as I’ve already implied above, many of the tableaux she created became repetitive upon the third or fourth time. She beautiful encapsulated the palimpsestic nature of the story, which writes and rewrites the character’s experience, moving from dream to waking to nightmare and back.

The fractured nature of the scenes, helped by Chloe Lamford’s costuming and set design provided a haunting exploration of trauma and memory, the ways that pain collapses the past and present into a series of fragments, layering the terrible with the beautiful as the ash and dust from bombings becomes the first lovely snowfall of a German winter, the child’s doll becomes the corpse of the burned bride.

My only issues here were with Crimp’s libretto, which I found to be occasionally too on-the-nose with its white-feminist critiques of head-covering, male poets and their objectification of women, and of technology as a dehumanizing force (not that it isn’t, I’ve just seen it a million times. Also, if you’re writing an opera in 2019, please do not refer to cell phones in your libretto as “mobile phones.” That is not how people talk, just like we don’t say “electronic mail’ or “laptop computer” in normal communication.)

I found the Crimp/Foccroulle section to be somewhat overlong, and, I have to say, I was a bit disappointed that Schumann’s music did not return at the end. Instead, the show was broken into two discrete sections, and even without an intermission, these two halves didn’t not always seem to fit back together.

Dichterliebe recedes, too small, too inward-looking to capture the seas of pain, trauma, and memory that surround issues of migration. This may be a fair reading, for Heine’s Romantic exile is not the one that many people across the world face as they flee their homes to escape violence and death.

But, I’ll take these issues and inconsistencies in exchange for an extremely provocative, bold, and interesting evening, something that I haven’t seen in a while and certainly wouldn’t have expected from a Dichterliebe, beloved as the piece is to me.

Dichterliebe closes with a burial of love and suffering, the two emotions cast as sides of the same coin, cast into a coffin so enormous that it can only fit in the sea, a fantasy of escape from emotions so big they threaten to overwhelm one completely.

Zauberland closes with a command, the only time a male voice speaks in the opera: “Now wake up,” a hard denial of the already tenuous escapism of the past 80 minutes, in which dreams aren’t nice for long and suffering can’t be cast away into the sea.