Take care of this house

How does one make a performance of standard opera repertoire like Mozart’s Le nozze di Figaro feel “fresh?" 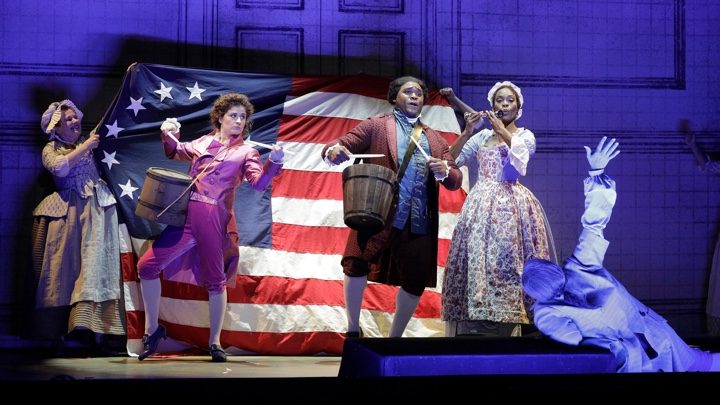 San Francisco Opera tried to address the issue in their brand-new presentation of the opera by Canadian director Michael Cavanagh, which opened at War Memorial Opera House last Friday and was seen on Wednesday October 16.

It marked the beginning of “a multi-year project to unveil the collaborations of Wolfgang Amadeus Mozart and Lorenzo Da Ponte as a trilogy set in an American manor house during three time periods”, as the press release proudly announced. They were largely successful in presenting the masterpiece with fresh outlook, if not exactly for the reason mentioned.

At the San Francisco Opera, these performances also indicated the end of an era, as after almost four decades designer Zack Brown’s serviceable sets and costumes finally being replaced. Cavanagh worked closely with set designer Erhard Rom and costume designer Constance Hoffman to bring his vision to fruition. And what is exactly his vision? I let him to explain himself in the following Director’s Note from the program:

Where better to set intimate, personal entanglements than a household, and where better to examine the struggle of public responsibility versus private ful?lment than the great social experiment that is The United States of America? Imagine a great house that is built just after a revolution, ?nds its feet just as a society’s grounds are shifting, and then falls into ruin, serving as a refuge for the survivors of a bleak and uncertain future. …

This, then, is the Great American House of Mozart and Da Ponte.

We begin with The Marriage of Figaro, which is all about new beginnings, hope and possibility. The time period is its original one, the late 18th century. The location is unspeci?c, somewhere near the heart of a brand-new America. This is a post-revolutionary time and place, a world of vast possibility for some, but great resentment and resistance for others. It is a house and a nation under construction, representing a hopeful future in which people strive to express their individual freedom within a framework of responsibility to each other. 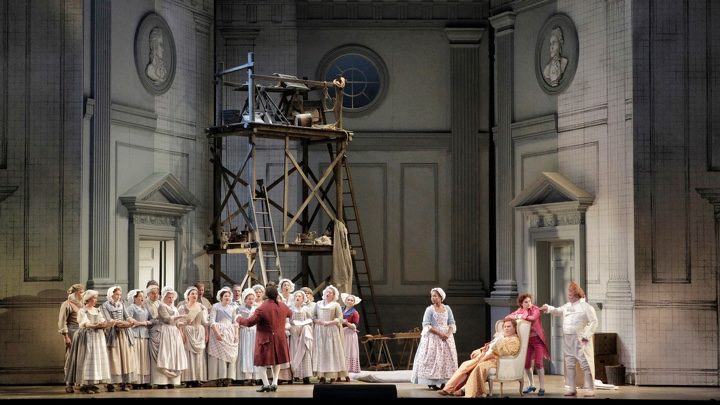 It was a lofty ambition, and for the most part, Cavanagh stuck to that “Great American House of Mozart and da Ponte” theme. During the Overture, a series of blueprints of that house were shown one after another on the screen, and it opened up to a simple stage showing two sides of that house on the left and right; each carrying a carving of Mozart’s and da Ponte’s heads respectively.

Cavanagh and Rom realized “a house under construction” by having the walls looking more like a 3-D printout of the blueprints rather than fully-painted ones, and in many scenes (including the picture above), the sets exhibited scaffolding used in such construction.

I liked the simple uncluttered staging for the reason that it brought the action exactly in the center of stage, visible from anywhere you sat in War Memorial. This was particularly important because those two side walls of the house (the ones having the head carvings) were placed at such an angle that wasn’t visible from the far sides of the house. I only realized this as I moved seats between the first two acts and the last two.

Putting a great emphasis of “the Great American House” in the colonial times invariably drew attention to the most convoluted aspects of it, the race of that house’s inhabitants. SF Opera were aware of that, and in the program, they included an article by Charles Chip McNeal – Director of the recently-established Department of Diversity, Equity and Community – some of which quoted below:

In this production, the roles of Figaro and Susanna are played by bass-baritone Michael Sumuel and soprano Jeanine De Bique, both artists of color. Sumuel comes from Texas, while De Bique hails from Trinidad. …

These acclaimed artists, each cast before the production’s setting was ?rmly established, are perfect for these leading roles and are excited to be taking them on. Yet, as the narrative tells us, Figaro and Susanna are servants in the Great American House of Mozart and Da Ponte. Are they slaves? Well, not intentionally. They are clearly meant to be of a different class than the landowners, but this production was not founded on the premise of negotiating historical race relations. However, no matter the intention, the optics are unmistakably clear. This production has inadvertently stumbled onto a well-recognized socio-cultural wound.

The race issue that Mc Neal pointed out above was further complicated as just to weeks prior to opening night soprano Nicole Heaston (who is African-American) was announced to sing the Countess replacing the ailing Irish soprano Jennifer Davis (who is white). All these brought to my mind two very interesting “optics” (as Mc Neal referred above). The first, during the extended finale to Act 2, the “good guys” were all people of color (picture below) and the “bad guys” were all white. The effect was even more pronounced when the singers were lined up for the final septet. 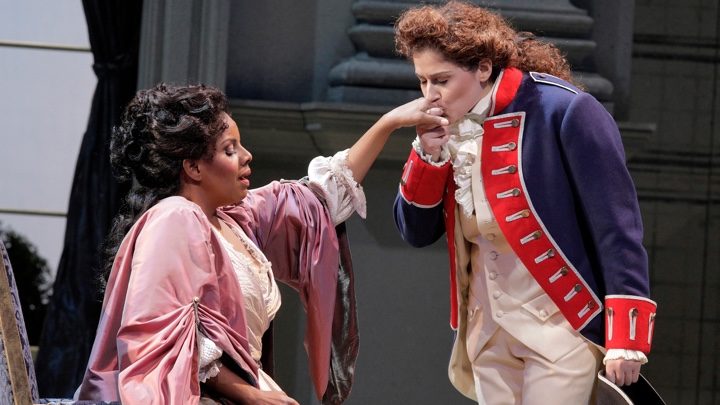 Other than that, I felt there wasn’t anything truly distinctively American with the staging, other than a brief evocative snapshot of Archibald Willard’s The Spirit of ’76 painting at the end of “Non più andrai”, as portrayed by Cherubino, Figaro and Susanna (see below).

Cavanagh could simply just repackage it as “the Great House” and avoid all the possibilities of racial complication. It would be interesting to see how Cavanagh translates his concept into the 1930s for Così fan tutte, which will come next season!

Concept aside, this was actually a very good production of Le nozze di Figaro; there was nothing superfluous on stage, all the movements were well rehearsed and choreographed, nobody did merely stand-and-sing – in a way, it was fresh!

Da Ponte put a lot of specific actions in the libretto – specifically on the terzetto “Cosa sento!”, the aforementioned Act 2 Finale, and pretty much the whole garden scene; it requires precision and a great timing to execute them smoothly and to make the drama work well. The cast, working closely as an ensemble, excelled tremendously in that aspect.

Cavanagh also, from the beginning, set the comedy more as an elaborate farce, with many scenes were designed to generate laughs from the audience. While in itself it was a valid interpretation, that required great acting from the singers; thankfully they all delivered!

The cast were almost uniformly excellent. Four of the five central characters were making San Francisco Opera debuts with these performances, a fact that was very much welcomed by SF opera goers. 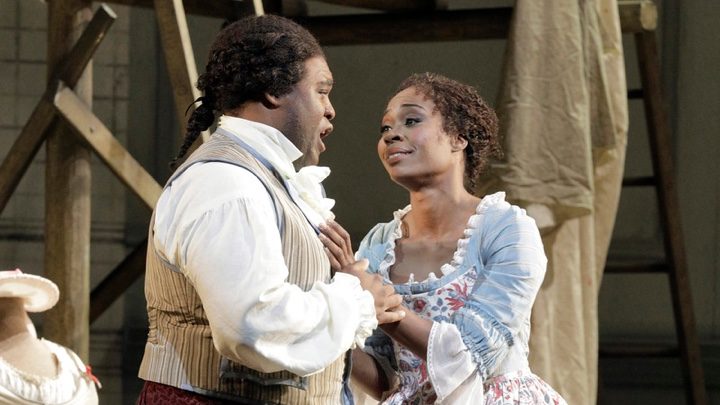 The Hungarian baritone Levente Molnár, who sang the title role of his country’s “national opera” Ferenc Erkel’s Bánk Bán during the Hungarian State Opera US tour last year, made a scene-stealing turn as Count Almaviva, played as if he were the American cousin of Baron Ochs. His voice sounded full and effortless, and his obnoxious-womanizing-person in charge characterization would certainly remind you of a certain political figure!

Trinidadian soprano Jeanine De Bique made San Francisco and role debuts as Susanna. I felt that her soprano voice – which distinctively differed from the usual bright and chirpy sounds for Susanna – took a while to get used to, but eventually it showed its lovely colors to match with her wholesome portrayal.

On the other hand, after a shaky “Porgi amor,” Nicole Heaston proceeded to provide the audience with an elegant and dignified interpretation of the Countess, capturing her range of emotions throughout the opera. “Dove sono” and “Sull’aria” duet from Act 3 with De Bique were showstoppers by virtue of Heaston’s heartfelt and tender delivery.

Bass-baritone Michael Sumuel returned to War Memorial to perform the title role, and while there were occasions that he got drowned by the orchestra or the cast, he presented a different take on Figaro by performing him as a jaded person and not as bouncy as usual. His “Aprite un po’ quegli occhi” was particularly chilling, helped also by Jane Cox’s lighting.

Italian mezzo Serena Malfi assumed the travesti role of Cherubino with vigor and excitement; and she looked boyish in her outfits. Most of the comprimario roles were handled by San Francisco Opera regulars and they were all great; from Catherine Cook’s funny Marcellina, James Creswell’s vengeful Bartolo, Greg Fedderly’s gossipmonger Don Basilio, down to Natalie Image’s Barbarina’s gorgeous take on “L’ho perduta.”

The greatest asset of the performance to me was the sparkling conducting of Henrik Nánási, who returned to conduct these performances after the immensely successful Elektra two years ago. Nánási chose a reading that was pretty brisk, but not rushed, and it worked so well to move the scenes along in the staging. If I might nitpick, the only place I wished he would slow down a little bit was at the “forgiveness” moment at the end; it came and went so quickly!

In summary, it was a glorious night at the opera, where all aspects of the performance lined up nicely. To get back to the original question in the beginning, to make a standard repertoire fresh, it’s not enough to just change the setting of the opera, but rather it will need a dedicated cast, an amazing conductor, and a sensitive staging to the story, as this performance amply demonstrated!