A life for the zarzuela

In El Barbero de Sevilla, as given through the weekend by the New Camerata Opera, there is far too much comic dialogue, all of it in English and none of it sparkling. 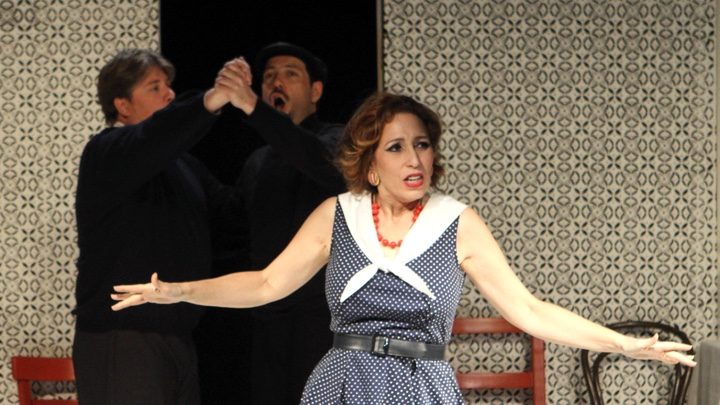 “No one pays any attention to operetta dialogue,” says my old friend La Cieca—in fact, that’s a line from her version of Die Fledermaus—but surely the less there is of it, the better.

In El Barbero de Sevilla, an implausible excuse for a zarzuela (aka Spanish operetta) as given through the weekend by the New Camerata Opera, there is far too much comic dialogue, all of it in English and none of it sparkling. The musical numbers are sung in Spanish or Italian—be sure to sit on audience left if you want to read the subtitles.

There is a little music—about five numbers, attributed to Gerónimo Giménez and Manuel Nieto, first performed in Madrid in 1901. Some of them weren’t bad, but—five? That’s it? The rest of the score, as given, was either pastiche (a young soprano dreams of future triumphs) or Rossini. Overfamiliar Rossini.

The musical director and translator of this event, Pablo Zinger, made a statement to the effect that zarzuela is unjustly neglected in the non-Hispanic world; he hoped Spanish opera might someday rank with the music of other nations, as Spain does in so many arts.

I’ve heard that before. I hear it every time someone around here attempts a zarzuela. Then I hear the performance and wonder—if zarzuela is so good—where the masterpieces are. Why are they never performed? Why do we always get this styleless third-rate fluff?

New York is so flooded with talented young singers that this production is stuffed with them. The situations—conspiracies, alibis, frauds—were so promising—what concertati Rossini would have done with it!—that I wondered if the actual score had not been tossed aside. There’s some very good singing on display, but little of it has anything to do with zarzuela.

Perhaps the New Camerata assumed an audience of jaded New Yorkers would never show up if they performed Rossini’s overfamiliar Barbiere. But there are more obscure and thus attractive Rossini operas. If you can cast Barbiere, you can cast Scala di Seta or La Gazzetta or Torvaldo e Dorliska.

The five numbers credited to Giménez and Nieto include a coloratura polonaise, a love duet, a prima donna showpiece and a comic duet for rival opera critics who come close to fighting a duel over precedence. (I liked that one!) Pretty stuff, but any personality was submerged by Rossini. If you put your music on stage with Rossini, you’d better be able to hold attention.

El Barbero is a backstager: A tyrannical father will not let his daughter sing because of the immorality of the theater, though his wife points out they need the money desperately. (He knows all about the theater because he’s having an affair with a prima donna.)

He sneaks off to see his mistress perform in Burgos. (Did I mention that of the action takes place in Seville—only French, Austrian, Russian and Italian operas take place in Seville? Zarzuela is a creature of Madrid.) Meanwhile, his prospective son-in-law reveals his true identity as a baritone and lures his girlfriend to perform Barbiere with him—in Burgos.

In Burgos, we are asked to believe, Il Barbiere is being given on a double-bill with Cavalleria Rusticana. That permits father’s mistress to be the adored prima donna. It also allows the baritone and the soprano to sing long Rossini arias.

I don’t believe this is an actual libretto—it smacks of bits of this and dabs of that to show off the cast. They were determined to sing Rossini, whatever piece was being performed. It’s okay that none of it makes sense, but none of it is funny, either. Calling it a zarzuela is phony advertising to attract audiences—of course, phony advertising to lure the rubes is also a showbiz tradition.

Maria Brea, who sings Elena, the daughter in question, has a fresh and brilliant soprano, occasionally insecure on opening night. Her “Una voce poco fa” in the soprano version went up to an astonishing high note—which at once went flat. Her ornaments are usually adept.

Roldán, the aging rival diva, is sung by Anna Tonna, whose imperious sortita, delivered with hauteur, was not just handsomely sung, it was one of the evening’s few humorous moments. She knows how to parade attitude while attending to her vocal business. She hadn’t enough to do, but then, Mama and Papa, despite many vocal credits, had nothing to sing at all.

The baritone fiancé was José Luis Maldonado, whose warm, sizable, technically finished instrument blended sweetly with Brea’s in their duet, then filled the room with “Largo al factotum,” as if unaware that the dialogue had already put us in the wrong act. He has personality and he likes to fill rooms with sound and gesture.

Costas Tsourakis, Elena’s singing teacher at home and Don Basilio in Barbiere, offered pleasurable basso support. The rival critics were mugged and sung with happy abandon by Brian Alvarado and Victor Khodadad. The orchestra played pleasantly enough but could not conceal its preference for performing Rossini as, often, they did.

The next time New Camerata feels like staging a zarzuela, I hope they’ll turn to Lehar’s Frasquita or Donizetti’s La Zingara or Mitch Leigh’s Man of La Mancha. So much more authentic.