You better shop around

Little Shop of Horrors loses its necessary edge when it’s wrested from the gritty world of its creation. 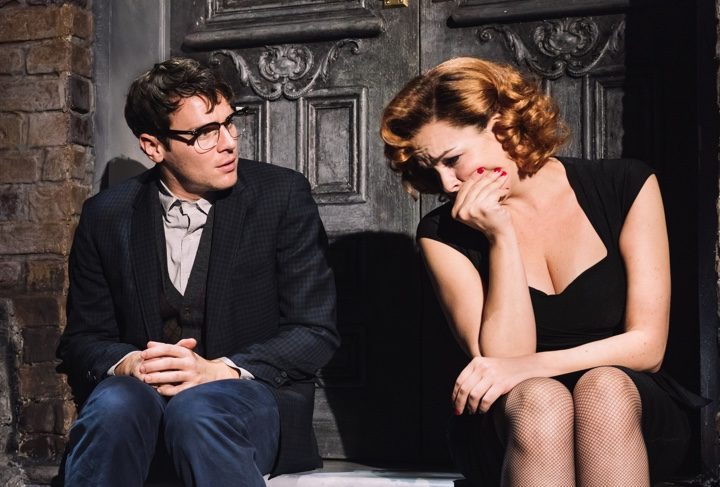 In Little Shop of Horrors, the denizens of Skid Row sing about the indignities they face when they travel uptown. Life below 14th Street might not be a picnic, but they know that it’s where they belong. The same is true of Alan Menken and Howard Ashman’s cult-classic turned community theater staple of a musical, which loses its necessary edge when it’s wrested from the gritty world of its creation.

The first time this show transferred to the Main Stem, in 2003, the result was an unmitigated disaster. After an out-of-town tryout that saw the director and all but one member of the principal company fired, the production settled into the cavernous Virginia Theatre, which swallowed up its intimacy and charm with enough gusto to make the murderous Audrey II proud. The reviews were mixed, the sales were poor.

Little Shop once again finds itself in the West 40s, though it’s current location is theoretically more suitable to the material’s small scale. Nestled in the upstairs space at the Westside Theatre, which seats about 300, the performers shouldn’t have to mug and preen to communicate the dark comedy to the audience. And mostly, they don’t. But this new production, under the direction of Michael Mayer, often feels as anemic as the hapless clerk Seymour Krelborn after he’s fed a few pints of his own blood to his ferocious flytrap.

Mayer has a knack for sanding away the sharp edges of whatever he’s staging — a quality on display recently in his Disneyfied La Traviata at the Met and his sitcomish, spark-free Burn This on Broadway. Here, he doesn’t seem to comprehend that the musical, at its heart, is a satire of the cheap comic movies like the one on which it’s based, and of the social mores of the 1950s and early 1960s.

Mayer’s production — with overblown sets (by Julian Crouch) that look more designer-chic than derelict, and costumes (by Tom Broeker) that wink a touch too knowingly at anachronism — looks like it was built for Universal Studios, a pleasant and passive entertainment for families to take in after they’ve finished up at the Wizarding World of Harry Potter.

When Seymour starts feeding humans to the ever-expanding Audrey II, the action provokes neither a sense of knowing spoofery or any real thrills and chills. And Mayer doesn’t seem to understand the tragic dimensions at play in the relationship between Seymour and Audrey I, the much-mishandled shopgirl who gives the terrorizing plant its name. 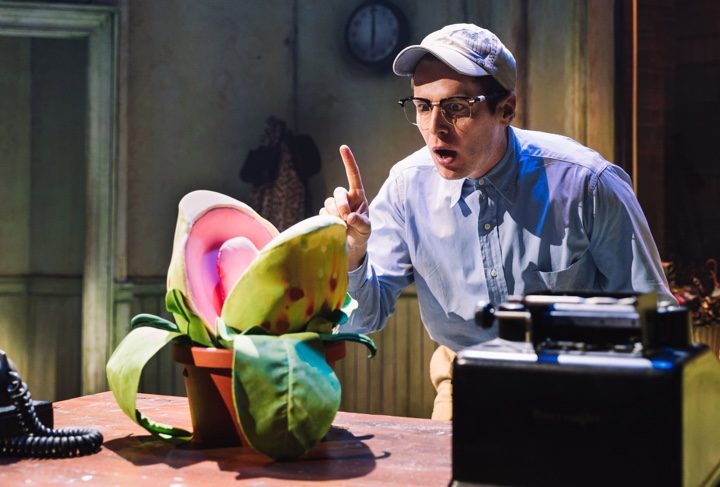 The only keen understanding of how the material should function comes courtesy of Tammy Blanchard, whose tough exterior and gradually revealed insight are ideal for the role. Audrey knows from the beginning that she and Seymour could never succeed as a couple; her first-act solo, “Somewhere That’s Green,” is a parody of the traditional “I Want” song, rather than the genuine article. Blanchard is the first performer I’ve seen to treat it as such, with the knowledge that her dreams of chain-link fences and Levittown domesticity are actually growing dimmer, not brighter.

In some ways, Blachard’s Audrey is ill-matched to the Seymour of Jonathan Groff. Even decked out head-to-toe in full geek regalia — ratty baseball cap, tape-reinforced coke bottle glasses, ill-fitting khakis — Groff cannot entirely convince as a nebbish. His suavity shines through, especially when he unleashes his honeyed tenor. If the impetus is to portray Seymour as a secret hunk from the beginning, it’s one that Groff and Mayer haven’t fully mined; instead, it causes the viewer to wonder why Audrey didn’t shack up with him in the first place.

Audrey’s taste in men seems more questionable than ever when her abusive beau, Orin Scrivello DDS, is played by the terminally charmless Christian Borle. It’s a tricky role — the nitrous oxide–huffing dentist needs to come off as equally repulsive and alluring, and the actor playing him should possess a strong sense of camp irony to land some of the character’s more outrageous moments. Borle doesn’t display much menace or sexual charisma, and he always seems more interested in playing to the audience than to his scene partners. When he became the first casualty fed to Audrey II, I nearly cheered.

The “Urchin” trio who serve as the story’s de facto narrators — here played by Ari Groover, Salome Smith and Joy Woods — perform in a musical style that more closely evokes the contemporary Broadway blockbuster than the tight harmonies of a 1960s girl group. As Mr. Mushnik, Seymour’s grudging employer, Tom Alan Robbins overdoses on Borscht Belt schtick, and mostly seems like a competent understudy rather than a strong supporting player. Kingsley Leggs provides the requisite basso profondo notes as the offstage voice for Audrey II, but I would have liked more wit in his delivery to match the dexterity of Nicholas Mahon’s puppet design.

Little Shop of Horrors is already a runaway hit, with a near-sellout achieved before opening night. Based on the enthusiastic response at the performance I attended, it’s safe to say that it’s pleasing its target audience. But I imagine that fans of camp and kitsch will find this interpretation, like several of the characters, drained of its lifeblood.