An opera company presenting a Broadway musical that centers around a woman of a certain age travelling to Italy with her young daughter might seem more a vehicle for a great diva of a certain age. 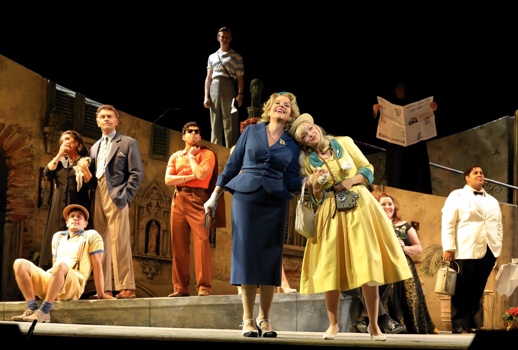 We live in cynical times. Nothing brings attention to this more than a group of people singing at the top of their lungs about the beauty of love and life.

Cynical, too, we seem, when at first glance an opera company presenting a Broadway musical that centers around a woman of a certain age travelling to Italy with her young daughter seems more a vehicle for a great diva of a certain age who’s not interested in downshifting into character roles and the great operatic gorgons.

I would also imagine many in the audience at the Music Center last night thought themselves far too cynical to fall for a musical with lines like, “I would sail across the world for just the color of your eyes.” But that, my beloveds, is exactly what happened last night at LA Opera when Adam Guettel’s musical The Light in the Piazza triumphed at the Dorothy Chandler Pavilion.

I can’t say I’m a fan of many modern Broadway shows. But Light in the Piazza appeared early on my radar and sparked my interest enough to acquire the cast album.

It’s a unique piece that isn’t easily understood from just listening to a playlist I remember the televised performance from Lincoln Center (nearly scuppered by the most incompetent sound engineering I’ve ever heard in a live broadcast) and saw the national tour when it came to Los Angeles with Christine Andreas (who was the Laurie in the Oklahoma! in my first Broadway show. Talk about full circle!)

My right eyebrow raised slightly when I read that Piazza was finally getting a production in London at the Royal Festival Hall for a limited engagement last June starring Renée Fleming and Disney ingenue Dove Cameron. Ms. Fleming had already headlined two Broadway shows which closed earlier than anticipated in spite of acclaim.

Still, I shouldn’t have been surprised since she had recently released a Broadway album where the lead track was none other than the 11 o’clock number “Fable” from Piazza.. The aforementioned eyebrow reached farther heavenward when it was announced that this The Light in the Piazza production would be joining the repertory of LA Opera, Lyric Opera of Chicago, and Opera Australia in a veritable world tour. Yet, I thought, what great diva doesn’t deserve one? 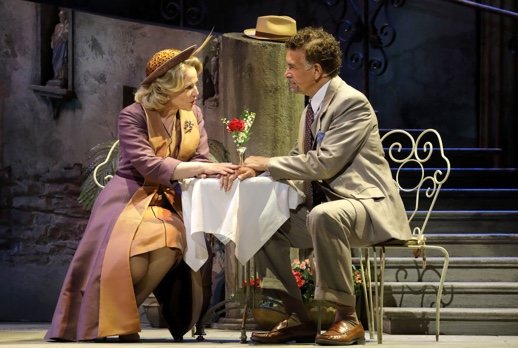 The story is fairly simple. A well-heeled housewife from Winston-Salem, Margaret Johnson, takes her adult daughter Clara on a tour of Italy to visit the places she honeymooned with her husband. There the daughter meets Fabrizio Naccarelli, whose father runs a local haberdashery.

The young couple are instantly smitten and contrive to marry. Margaret doesn’t know how to convey to this charming, and increasingly affectionate, Italian family that Clara suffered an accident as a child and is developmentally challenged.

Surprisingly or not the one time Clara’s condition makes itself apparent the family takes it as just another moment of Mediterranean temperament. Then Margaret feels her child may have found a safe harbor at last. More machinations follow, naturally, but I don’t want to spoil all of it.

Mr. Guetell’s score is exceptional, an amalgam of Broadway and chamber opera interpreted through a sieve of Sondheim and Britten and Debussy and a dozen other musical influences. Yet it retains a very original voice through its often surprising harmonic structures and the composer’s own opulent lyrics which help to stop time and examine the inner lives of all the characters simultaneously.

Also I think this is one of the only shows I’ve ever heard where the protagonists display their emotions solely through wordless vocalise. It’s a challenge to pull off and requires special certainty and strong work. Rhythms are often extremely tricky but there’s also an overwhelming romanticism in the music not only for the flowering of love but love remembered and lost.

The Royal Festival Hall in London has no wing space apparently so scenic designer Robert Jones had to design a clever unit set to evoke all of Florence and some of Rome. A simple.Bayreuth disc fashioned in Italian marble was surrounded by two scoops of terra-cotta scenery that I kept waiting to revolve but never did. 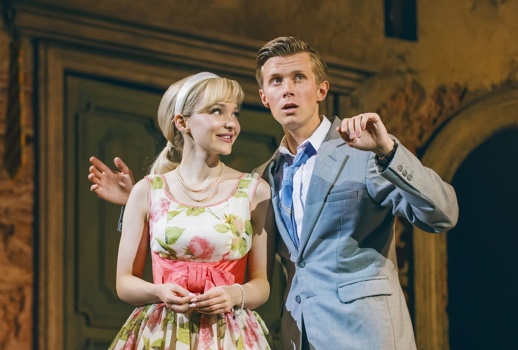 The evocative lighting of Mark Henderson helped to conjure the many changes of scene. Anyone recalling Michael Yeargen’s original production with its wide open spaces filled with golden light and massive porticos would be surprised to discover how well this piece adapts to a human scale and doesn’t need much scenery at all. It’s all in the music.

Director Daniel Evans kept everything moving smoothly through the many scenes and gave everyone the space to shine at the right moments. His play with Clara’s hat caught in the wind was especially ingenious as were the staging of Margaret’s two phone calls home. There was a lot of movement on stage because of the quick changes of locale but he always knew how to keep the audience focused.

Interesting that the production team chose to use supertitles for the musical numbers to make certain the audience could understand the lyrics. But more interesting that absolutely none of the lyrics or dialogue in Italian where translated. The authors aren’t afraid to have the Italian characters sing and speak in their own language and regardless of whether you can understand the colloquial Italian you can certainly comprehend the intent.

The Naccarelli family were led by esteemed Scottish soprano Marie McLaughlin and Tony winner Brian Stokes Mitchell. Ms. McLaughlin was equal parts charm and motherly steel and stopped the show cold with her famous interjection in the number “Auitami”: “I don’t speak English but I have to tell you what’s going on”.

Mr. Mitchell brought an old world courtliness and an abundance of slow burn sex appeal to his interactions with Ms. Fleming. The kiss they share late in the show was played masterfully for both its sensuality and then innocence. Perfectly judged. His baritone is still clear and warm and he’s a no nonsense singer.

The younger Naccarellis were the clownish Giuseppe played by Liam Tamne like a louche buffoon and his wife Franca was Celinde Shoenmaker. Vocally strong, especially in the ensembles, and appropriately predatory, she also got some of the flashiest frocks to model.

Ms. Cameron and Rob Houchen made an exciting and believably young pair of lovers. Ms. Cameron, I was surprised to discover later, is only 20. Her performance was fully committed and showed a real understanding of the kind of anxiety that could spill over in Clara at any time.

Her outburst during “Octet” brought the right kind of cold shock to the proceedings. Her singing showed rare poise and an easy accomplishment. The voice is strong and sweet right up to the top. Her showcase in the title song was especially moving.

Mr. Houchen played Fabrizio as a boy who’s not yet in control of his emotions let alone his limbs. Gangly and understatedly charming, he made the concerns from both their parents over the wedding more palpable. His singing voice was true and he has easy facility at the top and with his head voice which made his rendition of “Love to me” the real devastation it should be in the last act.

I don’t think anything prepares you for how hard that little song lands. Most especially because the masterful underscoring goes on for pages during the dialogue, teasing your ear, until the singing actually starts. He was also completely believable in Italian never once betraying an accent in all the dialogue and lyrics.

It’s almost surprises me to say how easily Renée Fleming fit into this ensemble cast. Everyone, save Mr. Mitchell, started in London and have reassembled now. She never seemed as if she was out of her element in any way and consistently gave both a vocally and dramatic performance full of nuance and an abundance of inflection.

The Carolina accent was light and used only in the dialogue. Naturally she got the best of costume designer Brigitte Reiffenstuel’s work to model and she had an inordinate amount of quick changes that she carried off with aplomb. Her ensemble in the last scene, of course, was the best of all.

Vocally, she was in sovereign form right from the start in the big ensemble. In “Statues and stories” which opens the show, it was impressive to hear her ring out over the cast with little effort. All evening she did so much with the sung text and often took two phrases in a single breath.

The contemplative “Dividing day” surged with longing and long, long, phrasing. Even more impressive was at the climax of “Fable” in the last scene where there was a bigger ritard than I’ve ever heard and Fleming leaned into her “Amami Alfredo” voice for those final high G’s. Gooseflesh. No kidding.

She’s as good as you can imagine and very natural. For someone who was such and acclaimed Tatyana, Marschellin, Mozart’s Countess, it shouldn’t surprise but it does because all those roles are almost like acting in slow motion where here we’re in real time. Her comic skills can’t be faulted either.

Especially touching were the two tense conversations with her husband back home played by a gruff Malcolm Sinclair. Through Fleming’s performance you could see that even though all pretenses had fallen she still did love her husband in spite of herself. It’s a great portrayal that deserves to be seen.

I especially want to praise the work of the LA Opera orchestra here, 38 musicians under the direction of Kimberly Grisby. Here’s the thing that hit me the hardest last night. When Piazza was first televised it was nearly at the 500 performance mark (I have a bootleg I enjoy regularly) but I don’t care how skilled any performer or musician is there’s a point when routine sets in and habits, even if they’re good ones, become second nature.

And who knows how many performances the National Tour had given by the time I saw the show here at the Ahmanson Theater?

Saturday night at the Dorothy Chandler this music was fresh. Fresher even than the original cast recording (and we know the kinds of conditions those are made under).

Ms. Grisby led the string-heavy ensemble in a luscious reading that brought out all those gentle, lilting, melodies and then opened the floodgates on all the yearning. It was so much more present than I had ever heard it before and returning to these other performances now will only be like facsimiles.

Thanks to Ms. Cameron there were an abundance of young people in the crowd including the tween daughter (and her mom) who had flown from three states away because they couldn’t get tickets for the performances in London. Neither knew much about the show or Guettel, or Fleming for that matter, but I saw them both wipe their eyes at the end of the evening.

They weren’t alone, either.