Tales of the citrus 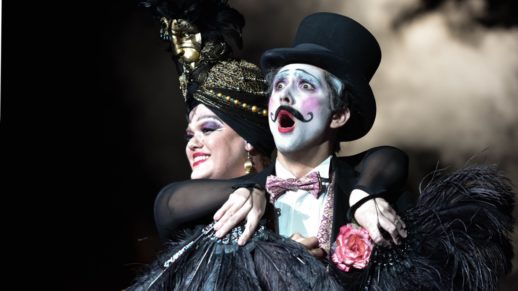 Opera Philadelphia’s Festival O is back for the third year in a row, and let it be said at once—these brave folks are playing without a net. While O19 is somewhat smaller in scale than the last two, the signature audacious, outside-the-box vision for this event, which  has considerably invigorated the city’s arts scene, is as strong as ever.

Maybe more so: previous festivals, while featuring bold new works, included a classic presented at Opera Philadelphia’s home theater, the Academy of Music. 017 had Die Zauberflöte; and O18 brought Lucia di Lammermoor. In both cases, the productions were interestingly idiosyncratic, but the material was, of course, comfortably  familiar.

This year, even that “big ticket” Academy opera is daring—Prokofiev’s The Love for Three Oranges, largely known at least in the U. S. only through a short orchestral march that vividly displays  the composer’s signature propulsive energy. Seen here, presented in a snappily colloquial English translation by David Lloyd-Jones and showcased in a wildly imaginative production by director Alessandro Talevi, Oranges is never less than extravagantly entertaining theater. But I’m only intermittently convinced that it’s more than that. 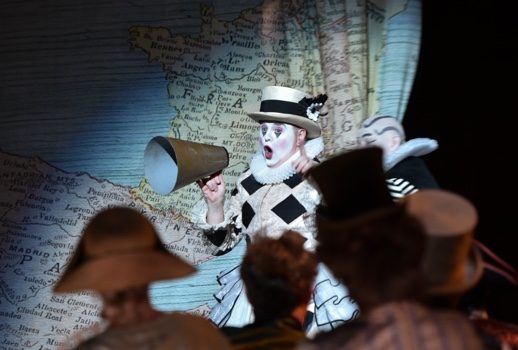 It is a mixed bag for sure: mostly a kind of fairy tale romance (a Prince in search of laughter and fulfillment is condemned by the evil Fata Morgana to fall in love with… yes, three oranges) laced with broad farce, and given a meta-theatrical frame.

Yet underneath all this wackiness are glimmers of something more serious. A collage of historical periods, including some commedia dell’arte characters recalls Strauss’s Ariadne auf Naxos, written a decade or so earlier; in Talevi’s production, a kind of pan-European style (including a wheelchair bound Prussian general) sharpens that connection. Ariadne is, fundamentally, about old orders giving way to new ones. Perhaps there’s some of that in Oranges, too? 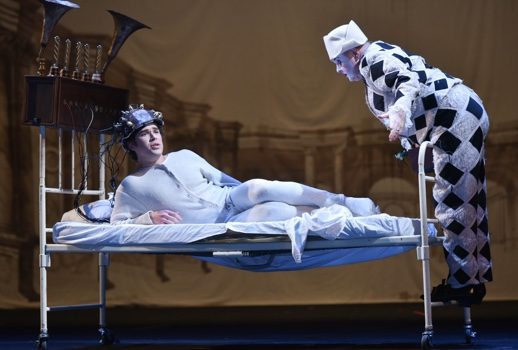 Intriguing as all this is, it doesn’t ultimately cohere. There are many deliciously clever scenes and images in this production—a particular favorite for me is turning the oranges into giant Fabergé eggs, which emphasizes the opera’s Franco-Russian roots (the original libretto was in French). But there are so many ideas and such a complicated layering of styles that I just couldn’t keep up.

Midway through the first act, I thought I might be watching a mashup of Dürrenmatt’s Der Besuch der alten Dame and Disney’s Beauty and the Beast. Fabulous designs (scenery by Justin Arienti, costumes by Manuel Pedretti, lighting by Giuseppe Calabrò, “action” by Arthur Braun) bring an almost Julie Taymor-esque level of spectacle—sometimes distractingly so.

But it’s hard not to be enchanted by the sheer theatricality of it, and the entire company throw themselves into every challenge with complete commitment. As a score, Oranges impresses most through Prokofiev’s vigorous, rhythmically sprung orchestral music (including that famous march). Lyricism is in short supply, and there aren’t many extended or memorable vocal passages. 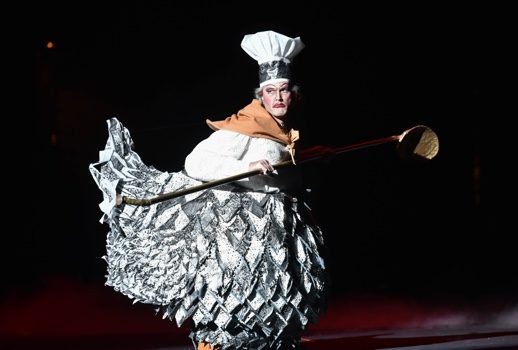 Still, several members of this excellent company distinguished themselves in particular. Jonathan Johnson made a winning, ardent Prince; Wendy Bryn Harmer and especially Amanda Lynn Bottoms were a dramatically and vocally glamorous pair of villainesses. Zachary James is a total hoot in the drag role of a monstrous cook. Most of all, Barry Banks’ Truffaldino spun a gloriously free tenor line, and acted every moment with consummate charm.

Three cheers also for conductor Corrado Rovaris; the Opera Philadelphia chorus (under the direction of Elizabeth Braden); and the orchestra itself. This is a score that makes considerable demands, and they were realized at a very high level here.

The 10 ten days will bring a wide range of works, going back as far as Handel, and bringing us up into works composed just this year. I’m looking forward to the invigorating mix… and to sharing it here at parterre box.