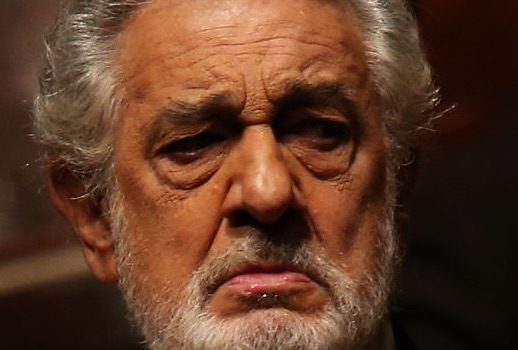 Two weeks ago the news broke that the veteran star tenor is to be investigated by Los Angeles Opera, which he has led since 2003, following an AP story detailing complaints of sexual harassment from a number of women.

First, his people sent out a lawyered-up press release advancing the argument that “all of my interactions and relationships were always welcomed and consensual” and stressed that whatever he did, that kind of stuff was pretty much standard operating procedure way back in the day.

By that kind of logic, almost any act of sexual abuse could be excused: so long as a potential victim doesn’t go full Tosca on him, the abuser can usually rationalize that she is tacitly in consent.

But that’s all for investigators to investigate. In the meantime, though, Domingo needs to stop thinking only of himself and consider how his various acts of denial are affecting the broader world of opera.

At the very least, Domingo is a distraction. Our JJ has already been in informal communication with some of his colleagues in the critical profession. Unanimously they have lamented that when it comes time to review the Met’s Macbeth revival, they will have to address Domingo’s participation and the Met’s moral position in presenting an artist under a cloud of suspicion.

“This is going to be very like Jimmy’s last seasons,” one writer observed. “Every review then was 50% medical report.”

Domingo seems, in fact, to be trying to turn his performances into referenda on his moral character. A report on his recent concert performance of Luisa Miller in Salzburg reads in part

Plácido Domingo received a standing ovation as he took to the stage at the Salzburg Festival on Sunday, a concerted show of support at his first performance since nine women accused him of sexual harassment in a report by The Associated Press. . . .

“Wonderful public, good performance all, I mean so much love from the public,” Domingo said after the show as he signed autographs at a side entrance for dozens of fans, many whom said they have followed the opera legend for decades.

Frankly, Domingo’s behavior is selfish. He seems to be singing only in order to receive affirmation from his audience that he has done nothing wrong. It’s not about Verdi or the Salzburg Festival or his colleagues. It’s all about Domingo.

Here in New York, the Met is in recovery from more than a decade of James Levine scandales first about his health and later about sexual abuse charges comparable to those leveled against Domingo.

The last thing the company or the Met public needs is yet another season focused on extra-artistic matters. We don’t need the 2019-2020 season to be about reassuring Domingo that his little slap and tickle back in the day was not only acceptable but actually kind of roguishly adorable.

Domingo has a very large public and so the Met seems to be suffering a conflict of interests here: yes, they want to sell all those tickets, but no, they don’t want to be seen as condoning sexual harassment. So at the moment, it’s reasonable to see how the Met’s taking decisive action can be perceived as problematic.

So now Domingo can start acting like an adult and take responsibility for his actions. In practical terms, “taking responsibility” here means voluntarily withdrawing from his Met dates and suspending further Met contracts until a suitable later date: for instance, when the report is delivered to Los Angeles Opera.

The situation would be different if Domingo were indispensable or even outstanding in either of the roles he’s announced for this season: sometimes you do need to bend morality a bit for the sake of great art. But Domingo is not particularly outstanding as Macbeth, and Sharpless is a role in which one cannot be indispensable.

And God know he doesn’t need the money.

So the choice is clear: for the sake of the Met and for the sake of the art of opera, Plácido Domingo should make a clean exit from the Met’s 2019-2020 season. And he should do it as soon as possible so the company has a chance to recast these performances in a solidly artistic way.