Winterstorms that go bump in the night 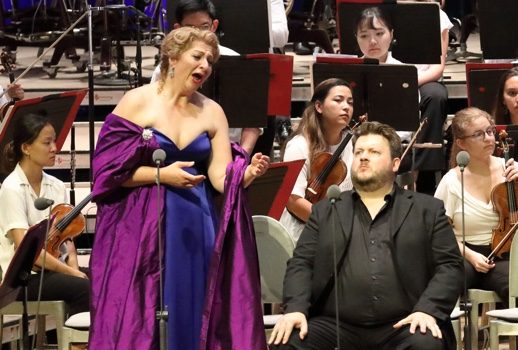 In one of Saki’s stories (“The Game Bag”), a pair of his pompous suburban aristocrats explode over a social gaffe. After some time the louder and burlier one stomps off in a huff. “It was as though,” says the author, “one had come straight out from a Wagner opera into a rather tame thunderstorm.”

This trope came to me Sunday evening when a hefty thunderclap shook Tanglewood’s Koussevitzky Shed just as Andris Nelsons raised his baton for the third act of the weekend’s concert Die Walküre, and lingered as further rumbles and much pelting rain through the Valkyries’ scene. Even the surtitles commented appositely: “A storm is coming from the North!” “It is Warfather, in a fury!”

Warfather, in fact, had nothing to rage about: It was an excellent performance, stretched out from Saturday night to Sunday afternoon and evening, mostly in fine weather. No undue humidity to dismay the taut strings or vocal cords. You couldn’t calculate the clouds would burst, especially not so perfectly on cue, but grins appeared all around. Those passing the evening on the grass may have had to run for it, but regular followers of the Boston Symphony’s summer residence are used to that.

And Nelsons led a thrilling performance, melodrama and shadow, romance and joy, epic situation piled on epic situation. The low strings were especially delectable in the acoustic provided by the adjustable ceiling panels, and the score always sounds richer, more full of light and sparkle when not emerging from the pit before a stage.

In the four-volume roman fleuve that is Wagner’s Ring, Act I of Die Walküre is an all-but-self-contained short story, an episode, a white-water raft that, in its final pages, shoots several frothing rapids. A man with no name meets a woman stuck with her husband’s name. You, the audience, even if you have seen Das Rheingold, have no idea who they are. Only a theme or two hints at any connection to the previous opera.

What they need is a proper weapon of defense. Happily, there’s one sticking out of the tree that holds up the oppressive house. Their incestuous link isn’t a terrible shock to us—the fact that they don’t care in the least about it is the shock, or it was a hundred fifty years ago.

There is no part of the Ring that has less to do with the fate of the titular bauble, which isn’t even mentioned—none of the three characters we encounter in this scene has ever heard of it, and all of them will die without learning about it. This coincidence, this sidelining—plus the passionate storytelling, the lyric strophes, the climax rising upon climax to the madness of the final pages—renders the scene dandy for a standalone concert. 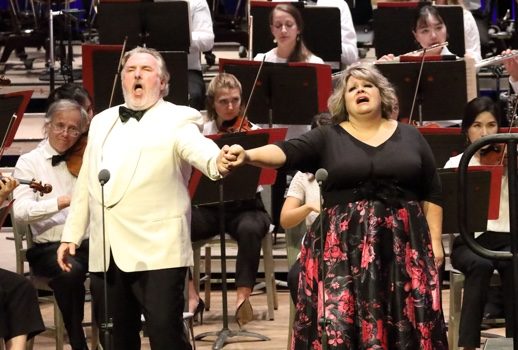 The only drawback is that the action leads inexorably into Act II (Fricka’s grudge; Siegmund’s death) and that into Act III (Brünnhilde’s mortal destiny), and those familiar with the full story may regret the inconclusiveness.

So the BSO followed its Saturday night Act I with the next two acts at mid day and evening Sunday. A glamorous cast, all of them primed to act the drama, not just stand there, and an energetic orchestral interpretation brought a happy house of concert-goers to their feet.

Enhancing the Wagner weekend were many pre-concert lectures and musical moments. These included a lieder concert Saturday in Tanglewood’s new Linde Hall by three advanced students of Tanglewood Music Center, singing songs of Liszt, Berg and Wagner. I bring it up so that you can file this name in your keep-a-lookout bin: Margaret Tigue, who gave us the “Wesendonck Lieder.”

She is a singer with dramatic soprano potential, a deep, mature sound, flawlessly supported (as was not quite true of the other singers), an even, womanly range, with ebbing and flowing legato in “Träume,” filling the room with beautiful sound in all five songs. She sounded ready for the big time. I hope to re-encounter her very soon.

The six stars of the music-drama, familiar and unfamiliar, were a well-matched set of high vocal caliber, who acted their roles, physically and intimately: Brünnhilde gently stroking Siegmund with a pitying hand, Fricka looking back at the defeated Wotan with visible regret (and not the triumphant grin Wagner has Brünnhilde mention).

Long ready for the big time, in my opinion (since her Elsa at LOC some years back), Amber Wagner gave the emotional Sieglinde floods of golden tone, moderated when she felt called upon to reflect on Sieglinde’s mixed or bitter feelings. Anguish and ecstasy were the keynotes of her performance. But where other Sieglindes interpolate optional screams, this one stuck to the written notes. For my money, she’s the reigning Sieglinde of our day.

Simon O’Neill’s Siegmund had the problem of keeping up with her. He has a less spectacular instrument, but he, too, is a vocal actor, and the character is a tormented one. He rather declaims “Winterstürme” than croons it lyrically, and his life story is, after all, full of pain. His resentful determination was manifest in the great “Todesverkündigung” duet, the heart of Die Walküre, when the tension between him and the Brünnhilde of Christine Goerke was, as it should be, edge-of-the-seat.

Goerke’s Brünnhilde is familiar, lately, from half a dozen North American Rings. She does not have—and never had—a voice of Nilssonian size, and she wisely aims to create a more domestic, less statuesque figure. Does this really suit Wagner’s warrior goddess? Well, it will pass so long as the interpretation is coherent and the singing in tune—Goerke’s pitch has been known to vary, though it was reliable at Tanglewood—and the high notes are attainable if less than sumptuous.

Since this opera is about the humanizing of a goddess, it is perhaps unwise of her to jump the gun. Her debates with Wotan and Siegmund were human but intriguing.

Franz-Josef Selig made a pensive Hunding—not that he says much, but as Selig sings it, you wonder what’s going on in his mind. Perhaps the glasses distracted us. One doesn’t think of a Hunding wearing glasses, no matter when the production has been set.

The most astonishing sounds were provided by that bearer of all tidings, past and future, Wotan, king of the gods. He was sung by James Rutherford, a British bass-baritone unknown to me and to most of the audience. Rutherford, who has sung Hans Sachs at Bayreuth, fulfills what I want in a Wotan better than any singer in the part since the heyday of James Morris.

His dark, sweet, clear voice was smooth in debate, bitter in resentful irony, clarion in shattering roars of temper, gentled to a hush for intimate recrimination. This is a singer all Wagnerians will want to get to know.

Stephanie Blythe’s Fricka is a familiar quantity from coast to coast, and she was usually her reliable self, but there were passages of dryness, of coasting on the pitches, as if she had used up her authority. She sang then with another, a far less musical sound, though she hit the notes. I don’t know if she had an allergic attack of some sort, but she did not provide the steady connection to deeper vocal caverns.

She played the role, as she usually does, as a loving wife who hates to pick a fight with the husband she adores, rather than the more traditional shrewish, insulted goddess.

Among the Valkyries, all tip-top, I was especially delighted with Wendy Bryn Harmer’s Ortlinde and Eve Gigliotti’s Siegrune. It was powerhouse Wagnerism all across the stage and out into the night.