Why did I mostly want to close my eyes and just listen? 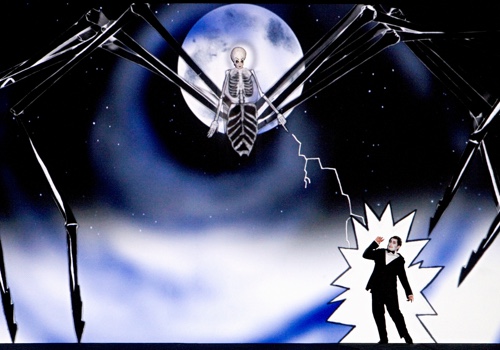 Since it premiered seven years ago, the Suzanne Andrade/Barrie Kosky animated production of Die Zauberflöte has proved wildly popular and has been remounted all over the world. Why then, during its New York City premiere Wednesday night for the opening of the Mostly Mozart Festival, did I mostly want to close my eyes and just listen?

Mozart’s next-to-last opera is simultaneously glorious and strange, profound and silly and I don’t envy anyone charged with producing it. There are those who like it the least of the composer’s acknowledged seven great masterpieces and yet it is truly beloved by just as many others. Is it a comedy or a drama? A silly romp or a probing journey into the nature of good versus evil? Perhaps it is all of these things and thus why it can be so damned problematic to stage.

Andrade and Kosky’s conceit is to drop the Singspiel’s spoken dialogue and reset the action inside a 1920’s silent film. There is no set per se, only a framed white screen onto which the continuous animation is projected. That screen has a number of doors through which the singers appear (think Laugh-In) either at stage level or about 20 feet up.

More often than not, they are strapped into those pop-out contraptions which drastically limit interaction between the performers, and that proves to be one of the production’s biggest missteps.

The physical restrictions “required” by the design decisions help to turn the characters into white-faced blanks devoid of personality: they function simply cogs in the big cartoon machine concocted by Andrade, Kosky and animator Paul Barritt. The suggested Weimar-in-the-20s world which they inhabit is nearly always ingenious and even occasionally diverting but its incessant motion soon grows wearying.

Not for a moment is the screen action still—something is always spinning or twirling or darting about. Even the most restrained moment of the evening—Pamina’s aching “Ach ich fühls”—is played against nonstop falling snow which can’t help but distract from the soprano.

The unluckiest victim of this busyness is the Queen of the Night, here represented as giant screen-filling spider. Only the head of the singer—in this case, Audrey Luna—is visible and during her first aria, her eight legs constantly tease and taunt Tamino who dashes back and forth nonstop trying to avoid them.

For “Der Hölle Rache” Pamina runs wildly in place trying to avoid the daggers being flung as insects swarm to molest her. Poor Luna: who is bothering to notice her spot-lit face near the top of the proscenium while all that is going on? In addition, her wan, thin singing only occasionally struck the sparks of a fearsome Queen but, boy, did that high F at the end of her first aria blaze like a torch! 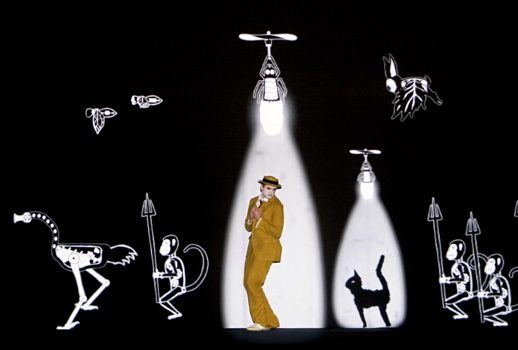 Papageno with his straw hat and deadpan expression explicitly evoked Buster Keaton but without any of that genius comedian’s modest charm or physical dexterity. That Rodion Pogossov, remembered as an appealing Papageno at the opening of the Julie Taymor Zauberflöte at the Met in 2004, sang so poorly in the first act (he later improved somewhat) only made the bird-catcher’s antics more trying than they can sometimes be.

Otherwise the musical side of the evening proved deeply satisfying especially the tautly fleet conducting of Mostly Mozart music director Louis Langrée whose contract was recently extended for another five years. His lithe reading positioned Zauberflöte firmly in the 18th century rather than loading it with intimations of the coming of Beethoven as some do.

The Festival orchestra responded with vibrant, sometimes ravishing playing and the chorus of Berlin’s Komische Oper (where the production originated in 2012) sang vibrantly.

Maureen McKay was also part of that Berlin premiere brought her spunky Louise Brooks-bobbed Pamina vividly to life. Her soprano initially sounded shallow and a bit wiry but she soon warmed up and made the most of her character’s shining moments particularly “Die Wahrheit” and “Tamino mein!” Her softly floating high notes were particularly attractive although more warmth and roundness wouldn’t have been amiss.

French tenor Julien Behr, her vocally commanding and forthright Tamino, returned to Mostly Mozart where he had been an unusually effective Arbace in Idomeneo three years ago. His beleaguered prince though was unusually hapless, a particular victim of the production’s exasperating avoidance of interaction between the performers.

Made up as the gruesome Nosferatu of Murnau’s silent film, tall Johannes Dunz embodied an unusually musical andcreepy Monostatos while his three wily co-conspirators—Ashley Milanese, Karolina Gumos and Ezgi Kutlu—were among the most delightful and euphonious Ladies I’ve ever experienced. Generally I dread every appearance of a trio of piping, off-pitch boy sopranos, but the unnamed members of the Tölzer Boys Choir sounded altogether splendid. 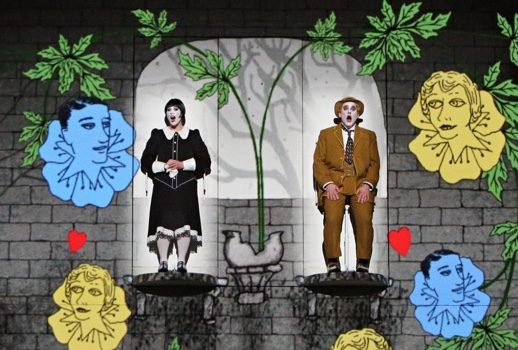 The revelation of the evening, however, was Dimitry Ivashchenko as both the Speaker and Sarastro. Although Andrade and Kosky keep the Speaker off-stage and turn Sarastro into a dramatic cipher, the Russian bass made an indelible impression rolling out firm inky black tone secure from top to impressively resounding bottom while sounding young and virile, unusual qualities in a Sarastro.

nfortunately his beautiful “In diesen heil’gen Hallen “ was undermined by bafflingly creepy stage action during which the overcoated, top-hatted men of the chorus ominously surrounded a cowering underwear-clad Pamina—huh?

Having the Speaker intone over a loudspeaker his heartfelt interaction with Tamino was only one of a number of dubious musical interferences. The most egregious was replacing the spoken dialogue with projected intertitles (as in silent films) in English whilst a pianist doodled this-and-that, again over the loudspeaker.

The printed program was unhelpful about identifying the music played—it sounded vaguely Mozartean, vaguely silent-filmic but it was altogether off-putting and made for awkward transitions as the musical numbers resumed.

While acknowledging the inventiveness of Andrade and Kosky’s approach, it failed to convince particularly in the more serious moments of the opera. While the animation had its amusing moments—the witty images of Papageno and Papagena’s house filling up with cavorting offspring was sweetly apt—much proved inelegant and unhelpful, most especially the personification of Tamino’s flute as an ersatz-nudie-Tinkerbelle who incessantly showered the scene with acres of staffs of musical notes.

Papageno’s bells depicted as marauding faceless nymphets out of Henry Darger were another head-scratcher.

One thought I did have as my mind occasionally wandered was that THIS fanciful spin might be what the Met should be doing—entirely in English—as its holiday family offering rather than its grossly butchered reduction of the Taymor. That macheted corpse will presumably have its final run later this year—final as the Taymor is being replaced soon (and not by the widely-rumored Robert Lepage version, I’m reliably informed!)