Benjamin Yarmolinsky’s The Constitution: A Secular Oratorio, performed by Vertical Player Repertory on Thursday evening, was an awful lot of legal speak for one evening. 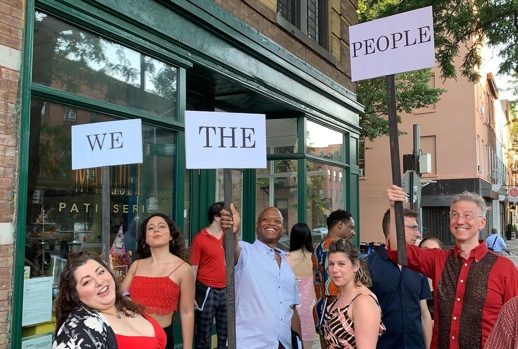 There is a rich history of sung constitutions. During the French Revolution, when the new Republic was changing constitutions every couple of years, men of letters created pastiches, comprised of the most popular opera arias of the day, which presented and commented upon these founding documents.

The fraught political climate seems to, again, have prompted a renewed interest in artistic treatments of political documents: a play about the Constitution is currently running on Broadway, while a celebrity reading of the Mueller Report was livestreamed from Riverside Church on Monday night.

The world premiere of Benjamin Yarmolinsky’s The Constitution: A Secular Oratorio, performed by Vertical Player Repertory on Thursday evening, formed part of this trend. Yarmolinsky’s oratorio was a gargantuan work, just under two hours long and sprawling over two acts – that’s an awful lot of legal speak for one evening.

It was also written for relatively large vocal forces: the eight-strong battery of soloists, backed by the VPR chorus, struggled to fit in the tight black box of Brooklyn’s Behind the Door Theater.

The Constitution was organized into three parts, purportedly mirroring Handel’s Messiah (although it was unclear what the two works have in common beyond the three-part form and the “oratorio” label). The first part comprised articles from the Constitution itself, while parts two and three dealt with subsequent amendments including the Bill of Rights, the Reconstruction Amendments, and the 27th Amendment of 1992.

Yarmolinsky’s approach to this material was, for the most part, light-hearted. His score was a hodgepodge of musical styles: at its most adventurous, it recalled the brash verbosity of 1920s Virgil Thompson, yet at other times it seemed to brazenly emulate vaudeville, classic Broadway, ragtime, and the blues. Indeed, the oratorio often felt like a listener’s anthology of American musical culture, a revolving door of musical parodies from John Philip Sousa to Jerry Herman.

Less effective were Yarmolinsky’s caricatures of 18-century music (ostensibly to evoke the period in which the Constitution was written), which often sounded like The Rake’s Progress minus Stravinsky’s clamor and crunch. The recurring fugal passages, the Handellian circle-of-fifths progressions, and the Galant dances all felt a tad overcooked and if there is one thing opera doesn’t need, it’s more da capo arias.

Dramatically, The Constitution suffered from the lack of tension or drive inherent to its source material. This feeling of dramatic inertness not helped by the division of the musical into discrete numbers; a more continuous form would have aided the oratorio’s flow and might have drawn out greater literary and political links between the articles.

Indeed, the faltering musical form often made for rather abrupt transitions between moods. While the overriding vibe of the piece was somewhat irreverent, occasionally celebratory, and sometimes frustratingly apolitical, the Constitution’s more unsavory articles forced a foray into more sober territory.

These more serious episodes often fell flat, invariably failing to conjure up the kind of gravitas necessary to pull away from the general frivolity of the oratorio. A prime example was Article 1.9, the article which authorized slavery, which Yarmolinsky set to bland, plodding music, hardly weighty enough to represent the ongoing suffering wrought by America’s slave trade.

Indeed, the main thing missing fromThe Constitution was any hint at the resounding social impact of the document: while Yarmolinsky’s catchy tunes and clear setting were effective in communicating the Constitution’s content, they fell short on showing how we, the people of the United States, fit into the document and its history.

The Constitution is a living document; its articles affect us in our daily lives and have profoundly affected the lives of millions of Americans before us. Yet Yarmolinsky often seemed blithely unaware of the document’s relevance, its power, and its danger; the Second Amendment, for example, was set to such a sprightly tune it could have been an NRA advertisement, essentially erasing this country’s painful history of gun violence.

When setting a text like the Constitution, every musical decision is political. Yet, Yarmolinksy seemed to go to great lengths to bypass the political weight of his text, or, perhaps, simply failed to capture the political reverberations of the document in his two-dimensional polystylistic musical language.

If The Constitution failed to form a more perfect union between the sincerity of its text and the insincerity of its music, this was more than remedied by the lively, impassioned performances of the Vertical Player Repertory singers.

The VPR chorus brought bucketloads of character to Yarmolinsky’s extended choral passages; the result was less a homogenous chorus, and more a rich tapestry of individual personalities coming together in a sharp, full-throated ensemble.

Their performance had an infectious energy, which, under the baton of Peter Szep, was channeled into a nuanced and vibrant interpretation of the composer’s score. Moments of antiphonal singing, especially, were smoothly executed, Szep coordinating a neatly balanced stereophony with much aplomb.

Judith Barnes and James Rutherford’s direction saw the chorus prancing and dancing, catwalk style, across the traverse stage, creating an ever-shifting soundscape around the audience. The coziness of the venue only lent intimacy to the performance – the words of the Constitution felt increasingly personal sung at me, fortissimo, by a soprano just two feet away.

In a directorial coup, the doors to the theater, bordering onto the street, were left open throughout, so that the entire performance took place in full view of Brooklyn’s gawking flâneurs. At times, the performers spilled out onto the sidewalk, their gentle chorale mingling with the sounds of passing traffic and restaurant punters, as if hinting at the vast American nation beyond.

Of the soloists, Roland Burks stood out, lending his gravelly bass-baritone in a staunch declamation of the fifth article. His recitation of Frederick Douglass’ speech to the Scottish Anti-Slavery Society (which Yarmolinsky had the good sense not to set to music) was utterly moving, achieving a level of passion and pathos that the score never quite reached.

Liz Lang, clad in the most fabulous multicolor jumpsuit, almost stole the show with her easy-breezy tone and high-octane scatting, capturing the humor of Yarmolinsky’s musical parodies. Michelle Trovato, too, found plenty of cheek in the quirkier eighteenth-century language of the Constitution while also lending a stentorian weight to the document.

The entire ensemble was well supported by Matthew Lobaugh at the piano, whose firm touch propelled Yarmolinsky’s music along. If the piano was ever-so-slightly out of tune, it only lent a bit of grit to a score which otherwise stripped the Constitution of any of its disaccord.